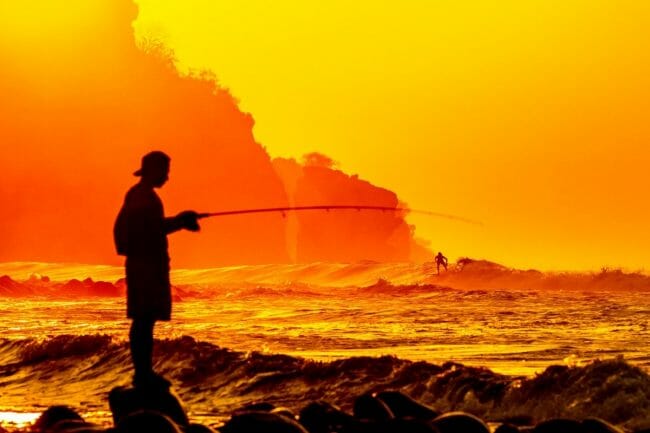 Surf fishing involves the use of many tactics that are vastly different from any other form of angling. The crashing waves and the foam created by them create a chaotic and somewhat unpredictable environment, but knowing when and where to cast in the surf is key to catching fish along the coast.

Some fish species can be caught within 20 feet of the shoreline while others are farther out and require you to cast out past the breaking waves.

Understanding how far out you should cast when it comes to surf fishing starts by understanding the fish you’re going after.

Once you develop an understanding of how the fish feeds and its habits, you can typically predict their behavior and know where you need to cast.

In this article, we will cover everything you should know when it comes to the question of how far to cast when surf fishing and what type of saltwater fish species you can expect to catch at varying ranges from shore.

Types of Fish Close to Shore

There are a few types of popular game fish species that are usually caught closer to the shoreline than others. This often happens at specific times of the year, but you should know that some fish come very close to the water’s edge as they feed on bait fish or other creatures in the surf.

In most cases, the fish that come up close to the shoreline will do so as the tide is rising or falling since this causes certain conditions that are favorable for them to have an advantage over their prey.

Fish species like pompano and redfish will usually use the rising or falling tides to chase bait fish towards the beach. Doing this often allows the fish to pin their prey into tight windows of water that make it easier for them to catch bait fish as there is less water for them to swim in.

Some fish also feed more vigorously in rough surf conditions because the surf can cause small bait fish to become disoriented in the rolling and crashing water.

You might occasionally catch other types of fish close to the shore, but it’s important to know whether the species you’re going after will venture very close or remain out in deeper water past the breaking waves.

If you do plan to fish close to the shore, cast your line out about 20 feet into the water where the waves form white, foamy suds as they roll in.

Fishing Farther Away from the Shore

Most surf fishing beginners start out by fishing for the species that are easiest to catch. It’s common to make the assumption that you can catch most types of saltwater fish near the shore, but for fish like mackerel, striped bass, flounder, sea trout, and even sharks, you’ll need to fish much farther than you might expect.

Catching these fish requires getting your bait out as far as possible since most of the popular types of saltwater fish cruise along the coast just past where the waves are breaking.

Most surf fishing rods are made to be heavier than your average fishing rod and longer because it’s designed to allow you to cast it harder, which launches it out as far as you’re able to cast.

It’s important that you try to vary the distance you’re casting out into the surf as the fish might be closer to the shore on some days and farther away on others.

It’s also a good idea to pay close attention to the times of day at dawn or dusk, as well as the rising or falling tides as this plays a major role in where you can expect to find fish at specific times.

One of the most useful tips you can learn when it comes to understanding how far to cast when surf fishing is being able to read the beach.

There are a number of different variables and scenarios depending on the beach you’re fishing at and being able to read the water helps you decide where to fish and also exactly where you should cast.

This is one of the hardest things for beginners and novice surf anglers to do, especially if they do not regularly fish in the surf.

Being able to spot sand bars, breaks in the waves and areas where small or large schools of bait fish can be expected is key in understanding where you should cast.

Sand bars are perhaps the most important aspect of being able to read the beach as you can usually expect there to be bait fish nearby, especially if it’s out very far from the shore.

Most novice anglers can’t tell where sandbars are located unless they’re protruding out of the water, but you can typically spot one by watching how and where the waves break as they roll in.

Rip currents or tides are another very important element that surf fishing anglers can use to determine where they should cast their bait.

A rip current is often formed in locations where a sand bar breaks and water is sucked out toward the ocean at a much more rapid pace. While these tides are extremely dangerous for swimmers, they are often a fisherman or woman’s friend as you can usually expect to find bait fish nearby.

Smaller fish will stay near the rip tide and use it, waiting for other creatures to pass by that they can feed on.

Finding an area of the beach that has a deep hole is also a big advantage as you can expect there to be big fish in or near the hole. Fish will often stay in holes as they can hang out near the edges and ambush any unsuspecting bait fish that are passing by.

It’s very hard to find where holes are in the surf just by looking as you won’t be able to see them. However, you can typically identify them by looking for large deposits of seashells or coarse sand that looks different from the usual sand that’s more fine in quality.

Looking for areas that are darker than the rest of the beach is another solid method used by surf anglers to find schools of bait fish or various game fish species along the shore.

The darker color is caused when the surf is rough enough to disturb the sea floor and disperse sediment into the water. Smaller fish and many other creatures that game fish like to feed on will be attracted to these areas as they are rich in food opportunities.

Fish will mostly be searching for various species of crustaceans in these areas. It’s common for a number of different surf fish species to feed on sand crabs, and many variations of crabs and other prey that are frequently found when the sandy bottom is swept away and exposed.

Seagulls and other types of birds are a surf angler’s best friend in most cases because they can serve as your eyes in the sky.

These fish are naturally gifted with the ability to spot areas where there are abundant numbers of bait fish and you should pay close attention to exactly where there are flocks of seagulls making dives into the water.

These areas that birds swoop down into might move or even start and stop very quickly as the fish will move around to different areas once they no longer feel safe.

Be sure to cast your surf fishing bait out directly into the area where the birds are diving or focusing on as this will also be the spot where you can expect to find fish.

Finding out how far out you should cast your bait when surf fishing often requires a bit of homework and knowing what to look for. You can often get a head start and go to the right areas by watching and looking to see where other anglers are fishing.

Be sure to use proper fishing etiquette and don’t get close to any other angler, but once they leave the spot, you can move in and claim it for yourself.

You can also ask staff or patrons at your local bait shop for tips on specific locations that are good to fish. Using these tips will get you in the right location and allow you to make the best decision on how far out you should be casting when it comes to surf fishing.