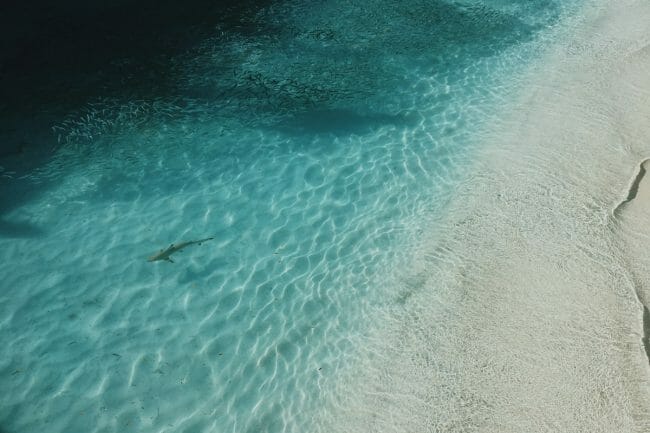 Surf anglers know that the single most exciting species of fish they can catch is almost always a shark. Many surf anglers set a series of rods up along the beach in hopes that they will hook a large shark.

Surf fishing for sharks kicks into high gear during the middle of the summer when most of the other game fish species have moved back out toward deeper water.

Anglers who have caught sharks in the surf will attest to the adrenaline-pumping action and intensity that comes when you’re fighting a full-grown shark in the surf.

There are some very important tips and techniques that you should know in order to maximize your chances of catching sharks while fishing along your favorite beach.

In this article, we will cover some of the most important points you’ll need to know when it comes to surf fishing for sharks.

The Best Time to Catch Sharks in the Surf

Sharks are more likely to come closer to the shoreline when the water temperature reaches a certain level. They will begin making their way towards the shore when the water reaches about 75 degrees Fahrenheit, which means the middle of summer is usually considered the best time to go shark fishing out of the entire year.

Most experienced shark anglers point to July 4 as the beginning of the peak of shark fishing season in the surf. This stretch of prime shark fishing will usually last until about Labor Day or a few weeks after.

Shark fishing in the surf is also best done in the late evening or at night since the dark waters make it much easier for them to hunt using their other senses to detect prey in the waters.

Sharks will also use the rising tide to ambush certain unsuspecting fish. Sharks will often prowl the beach in search of various species such as kingfish, croaker, and many others that they can often chase down.

If you know an area along the beach that is typically where other surf fishing anglers set up during the daytime hours, you can usually bet that this will also be a great shark fishing location as well.

Sharks will tend to gravitate toward areas that hold many other types of fish as they are not very picky when it comes to the specific type of fish they will eat at night, or in the daytime.

Also Read: Can You Eat Shark?

Most shark anglers who like to fish from the surf will fish throughout the nighttime hours and well into the early morning, while other anglers might arrive in these early morning hours and fish until an hour or so after daybreak.

Whether you’re fishing at dawn or dusk, it’s always good to keep in mind that sharks are much easier to catch and more prevalent along the beach when the sunlight is fading or during the night.

One of the main concerns anglers have when it comes to night fishing for sharks is the lack of visibility that you have which limits your ability to pay close attention to their fishing lines and rods.

It can also be very tough to play a shark along the shoreline after you’ve hooked one. In some cases, the fight with a large shark can last over an hour and the shark will zig-zag its way along the beach in the process.

If there are areas of the beach you’re fishing at that have warmer waters in some sections than others, you can be sure that there will be more sharks where the water is warmer. You can still catch sharks in moderately cool or even cold water in some cases if you know where to fish and use the right rig and bait.

One of the biggest factors that determine whether or not sharks will be actively feeding in a particular area is if the tide is rising or falling. Sharks, like other predatory game fish, will use the rising and falling tides to their advantage and ambush their prey inside the rushing waters.

If there are certain areas of the beach that feature sandbars or holes in the bottom, sharks will often use these depth changes to corral their prey and run them up into a shallow area where they can easily devout them.

Unlike fishing for some saltwater species that thrive in rough water and high surf conditions, sharks tend to stick to water that is a bit more calm.

You’re going to be using larger bait and the more calm the water is, the better your bait will stay on the hook, plus the shifting tides and hard-pulling surf won’t move the position of your bait.

When you’re surf fishing for sharks, you don’t always have to cast your bait out to a very far distance in the same way you might do for mackerel and other species. Instead you might be better off casting your lure about midway into the surf.

Experienced anglers will attest to the fact that most sharks will come much closer to shore than you might expect. Cast your bait just beyond where the waves are cresting to have the best shot at hooking a shark.

Best Rigs to Catch Shark in the Surf

Most sharks that you’ll catch in the surf will weigh less than about 100 pounds in most cases. There are the occasional giants that are well over 6 feet in length, but these are truly rare and one the most dedicated, or lucky, surf fishing anglers have a chance to reel in one of these monsters.

You’ll want to use a surf fishing rod that’s at least 8 feet long. Most surf fishing anglers prefer a shark rod that’s up to 12 feet long, which gives them more leverage and helps lessen the amount of fatigue you might get from fighting a large shark for an hour or more.

One of the most important gear items you can have when it comes to surf fishing for sharks is a large reel that’s capable of holding a significant amount of fishing line. You’ll want a reel that can hold about 300 yards of line because sharks are known to tear off vast quantities of line when they are hooked.

Just when you think you have them close enough that you can make the final pull to get them onto the beach, they will make another hard run back out to the deeper water and the fight will lengthen.

You’ll also need to use a steel leader instead of monofilament for shark fishing. This is due to the obvious fact that you’re dealing with an apex predator that typically has extremely sharp, strong teeth that will easily cut through most fishing lines like butter.

Don’t use anything below 100 pound test mono line when it comes to shark fishing. You can use heavier line up to about 300 pound test, but you can also get away with packing more line onto the reel by using a smaller pound test that’s less in diameter.

Remember that your sinkers and hooks will also need to be larger and stronger as sharks are notorious for straightening out smaller, lesser quality hooks.

It’s best to use a hook that’s at least a 6/0 size, but you can probably get away with using one as large as 10/0 in most cases for a larger presentation that will appeal to sharks more quickly than smaller baits.

Best Bait for Sharks in the Surf

It’s no secret that you’ll need larger bait when it comes to shark fishing. You can go with any type of bait fish you want and some might work better in certain circumstances for different shark species.

It’s often recommended that you use a bait fish that’s at least 10 inches long as most large sharks will usually not bother with smaller size bait.

You can also opt for using large chunks of cut bait in an area. Having multiple lines set out with bloody cut bait will always help draw sharks in closer and entice them to bite.

It’s a good idea to do some research and find out what sharks in your area like to eat before choosing which type of shark bait you’ll use.

Shark fishing is considered to be the ultimate form of surf angling. By following the tips we’ve given you, you’ll be off to a great start and should eventually land your first shark, or step up your shark fishing game and improve your overall chances.

As always, check the laws and regulations pertaining to surf fishing for sharks in your area and practice all safety measures that are related to shark fishing in the surf.