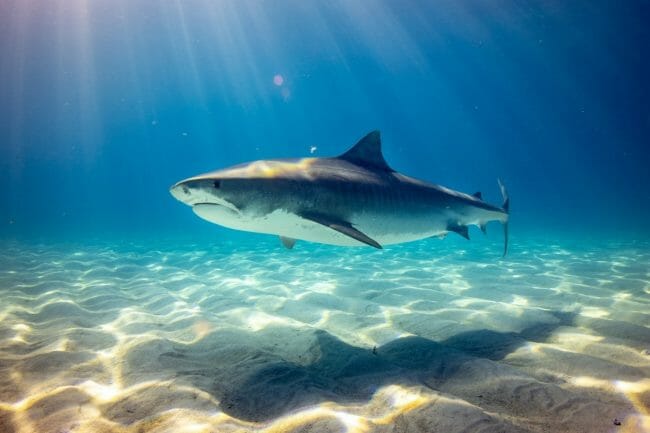 Sharks are undoubtedly some of the most sought-after game fish as surf anglers and offshore fishing vessels commonly target them.

They are mostly targeted for their massive size and strength as anglers relish the chance to fight one of these powerful apex predators and bring it into the boat or land it onshore.

Most anglers prefer to simply release sharks after they have caught them, but some will actually keep a shark and cook it’s meat later as a meal.

Most anglers who are unaccustomed to shark fishing don’t know the intricacies of what to do when it comes to cleaning and properly preparing a shark to be cooked.

If you’re looking to catch a shark or cook one that you’ve already caught, you should exercise extreme caution because their meat can hold very high levels of toxins and mercury, which can be very harmful to our bodies’ digestive system if we consume too much.

In this article, we will cover all of the basic information related to cooking and preparing sharks for consumption, as well as what you should know about the risks and dangers of eating sharks.

Can You Eat Shark Meat?

Yes, you can eat shark, although it is not hugely popular in Western societies.

The question of whether or not you can eat a shark depends on a number of factors, there are some species of shark that are more suitable for eating than others.

These sharks listed below are known to offer a better tasting meat, as well as lower levels of dangerous mercury that you will usually find in other species.

Before you leave to go on a fishing trip where you intend to catch sharks, or even if you might have the small opportunity to catch sharks while you’re fishing for other game fish species, it’s a good idea to study up on the different kinds of sharks that are commonly found in your area.

Once you’ve established which types of sharks you are likely to catch, you can then do further research to determine if they are among the species of sharks that are recommended for consumption.

It’s no secret that sharks can sometimes have a very high mercury level. This mercury level depends on what species the shark is as some are known to have much higher levels than others.

Mercury is something that is typically found in larger predatory fish and you should always be sure not to consume too much shark meat in a short amount of time as this can sometimes lead to mercury poisoning, which can be very serious in some cases.

When fishing in a certain area and taking a good inventory of the different types of sharks you’re likely to encounter, be sure to study up on the mercury levels that the species is known to contain.

Some sharks have higher mercury levels to the point that they are not really fitting to eat while others have relatively moderate or low levels and are fairly safe for consumption.

When it comes to children and pregnant women, these individuals should probably avoid eating shark meat entirely since they are at much higher risk of developing serious conditions of mercury poisoning.

Even small amounts of mercury can severely harm a young child in its mother’s womb, so it’s best to avoid this prospect by totally avoiding shark meat in any form for the duration of your pregnancy.

Are Sharks Good to Eat?

Some sharks have meat that tastes better than others. This is sometimes due to their diet or often it’s caused by the way their body works and the toxins or other elements that can be stored in a shark’s flesh.

Sharks are natural-born predators that are feared by almost every other creature in the seas. They are built for speed, power, and stealth and their bodies and abilities allow them to hunt down prey that almost never even see or sense them coming until the shark has them within the grasp of their powerful, toothy jaws.

Movies have been made about the terror that most swimmers and boaters have of being attacked by sharks, but anglers who fish for them are actually turning the tables and making themselves the predators and sharks the victims.

You can eat sharks and their meat actually provide very high levels of important nutrients that are essential to our overall health. Some cultures view eating sharks as a more ritualistic practice in which the person eating the shark’s meat is endowed with the shark’s spirit or power.

Regardless of whether you’re eating the meat of a shark to gain spiritual strength or to simply enjoy the taste of a freshly-caught shark, there are serious advantages and risks to eating shark meat.

Some anglers perform a practice known as ‘finning’ in which they catch a shark and cut off only the dorsal fin for consumption before dumping the rest of the shark back into the ocean.

This is very unethical and a shameful thing to do as we believe that it’s essential that you use and consume as much of the shark’s body as possible so that none of it’s meat or other body parts are wasted.

You can even take the remnants of a shark that’s been cleaned and use it as bait for crab traps or to fertilize a garden’s plants by burying the remains of the carcass in the soil.

Shark meat can taste vastly different from other types of game fish species. Sharks sometimes become very exhausted rather quickly compared to other types of fish and it’s important to get a shark into your boat as quickly as possible if you plan on cleaning and eating it.

This is because a shark’s muscle tissue will secrete high amounts of lactic acid and carbon dioxide the more exhausted it becomes, which will greatly affect the quality and taste of its meat.

It’s important to reel your shark in as fast as possible to avoid this problem. It’s understandable that getting a shark into your boat is quite a task as the larger ones are known to fight considerably harder than most other fish species.

Another unpleasant fact that relates to sharks and their meat is that sharks are known to actually urinate through their skin. If you catch a shark and don’t properly clean and prepare it quickly enough, it’s meat will have a taste of ammonia, which is extremely undesirable.

It’s very important that you clean the shark and bleed it out as soon as you have it on board the boat in order to avoid spoiling the flesh.

Sharks have a very meaty and mild taste that is often compared to be much like chicken or even alligator meat. When prepared properly, shark meat has a slightly sweet flavor that is very tasteful. It’s also very rich in essential vitamins and minerals that people need to improve their health.

The ocean is teeming with many different species of sharks that anglers commonly target and others that they try to steer clear of, such as the widely-feared great white shark.

There are plenty of shark species that can be eaten and some are more popular than others in any given area of the sea.

Some of the more prevalent sharks that anglers are known to catch and keep for making a meal out of are Mako, Blacktip, Dogfish, Leopard, Soupfin, Sevengill, and others.

The most popular out of these sharks is undoubtedly the Mako as it can be found in many of the world’s oceans and is known to grow quite large and produce lots of edible meat.

It’s commonly believed by most shark fishing anglers that sharks that have reached maturity and have lived to grow to a decent size are the best ones to clean and eat. This is mostly because young sharks are very slender and don’t offer very much meat at all.

Old sharks might have much more meat than any other among their own species, but this extra weight and meat is not always a good thing. Old sharks are known to have higher levels of mercury and toxins in the form of metals in their flesh which is known to accumulate over the years.

In addition to the increased toxins and mercury in an older shark’s body, you’ll also find that the meat is quite tough and much tighter than sharks that have only just reached maturity and are still in their prime.

How to Cook Shark

There’s no shortage of different ways you can cook sharks. One of the most popular ways to prepare and cook sharks is to simply grill them with citrus juices like oranges or lemons.

Many restaurants are known to prepare pan-seared shark meat that is said to be very tasty.

You can also broil shark meat using the same types of recipes you might for almost any other types of popular game fish species.

Some anglers prefer to cut the shark meat into small bite-sized bits and fry them into ‘shark bites.’ Regardless of how you want to cook sharks, there are countless recipes online that you can use to prepare your shark just the way you want.