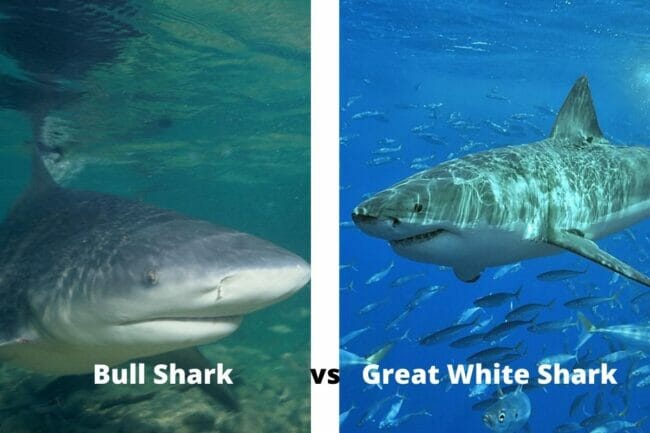 Sharks are some of the most dangerous creatures on Earth with very few natural predators outside of humans. In many areas, sharks are the apex predator in a specific environment as their ability to swim incredibly fast and ambush certain prey in the blink of an eye gives them a significant advantage.

It is true that there are some sharks throughout the world that are virtually harmless, but there are a select few that are especially deadly.

Many people are familiar with the basic details regarding Great White Sharks, but there are quite a bit of details related to Bull Sharks that are also very interesting.

Let’s explore the topic of Bull Sharks vs Great White Sharks in more detail and explain the characteristics and facts about each one.

How to Identify Shark Species

There are a few ways that avid shark anglers and others who spend a considerable time on the ocean can tell what type of shark they’re looking at if they happen to encounter one.

If you’re underwater in a cage or scuba diving, it’s fairly easy to spot these differences. However, it’s hard to get a good visual when you’re above the surface, but there are a few things you can look for to determine what type of shark you’re seeing.

Both Bull Sharks and Great Whites are incredible predators who scientists say have adapted over the course of millions of years to reach the state they’re currently in.

Both have developed extremely effective means of pinpointing certain types of prey and they also possess acute senses of smell, hearing and visual acuity which all work together to allow these massive species to devour nearly anything they want.

For the most part, both Great White Sharks and Bull Sharks can be found in relatively the same area.

However, there are a few places throughout the world where Great Whites are more well-equipped to deal with greater depths and colder water temperatures.

Likewise, the Bull Shark has developed certain adaptations that make it a more capable predator in certain coastal areas.

For people who have an interest in sharks, there’s a good chance that you’ve already watched a few shows or documentaries which detail the lives and habits of the elusive Great White Shark.

This beast is one of the largest shark species and also happens to be one of the most deadly creatures in the entire ocean. A single bite is often enough to kill most victims who are unfortunate enough to run into a Great White when they are in the water.

For starters, the Great White Shark can grow to immense sizes of 20 feet long. There have been a few stories and accounts from avid fishermen and other seafaring laborers who say they have seen a behemoth shark that’s roughly 25 feet long or more.

The Great White Shark is thought to be a descendant of the largest fish that’s ever existed, the Megalodon, which swam the world’s oceans millions of years ago.

You can usually identify whether or not you’re looking at a Great White Shark by taking into consideration the area in which you’re seeing the shark.

In most instances, Great White Sharks will only venture near areas where they expect to find plenty of food. They commonly visit the waters around the Cape of Good Hope off the southern shores of the African continent.

Some experts estimate that Great White Sharks are among the longest-living species of sharks that are still in existence. They are believed to be capable of living to the age of about 70, according to most experts.

This is an impressive age considering the rough life that many sharks are destined to live, but the oldest shark species in the world is believed to be the Greenland Shark. Some experts guess that the oldest Greenland Shark in existence today might be as many as 400 years old.

Bull Sharks are the smaller of the two species, but they are largely considered to be more dangerous in ways that the Great White might not pose much of a threat to humans.

Bull Sharks are known to venture much closer to shore with some individual sharks swimming up into areas where beach-goers might be swimming.

Around the Gulf of Mexico and the coast of the eastern United States’ Atlantic Ocean, it’s fairly common to find Bull Sharks attacking fish that anglers are trying to reel in, or even harassing scuba divers in some cases.

These smaller sharks might not have the immense bite power you typically find in most Great Whites and it’s also true that their mouths are quite a bit smaller as well.

The Bull Shark does have an edge over the Great White that strikes fear into the heart of anyone who’s relatively familiar with them.

Bull Sharks are much more aggressive than any other shark species in the world. This aggression is believed to be a result of extremely high levels of testosterone in the fish, which would explain their quick temper and bullish demeanor, which they draw their name from.

The average mature bull shark male or female typically grows to about 8 feet in length, but there are a few reported cases where they have managed to grow to 11 or even 12 feet long.

Compared to the massive 20-foot Great White Shark, this might seem insignificant, but a Bull Shark that’s 12 feet long is one of the more frightening prospects among anyone who’s relatively familiar with this type of fish.

The combination of a massive 12-foot body that might weigh up to 800 pounds along with the high testosterone levels they usually have is an unnerving thought.

Bull Sharks have a distinctly belligerent and antagonistic character, which means a larger-sized shark that’s as mean as most Bull Sharks might just be more scary than your average 20 pound Great White Shark.

Bull Sharks are a very common type of fish that can often be found in tropical waters and warmer climates. Great Whites have the capability to swim up into the brackish waters of most river systems throughout the United States, but this is incredibly rare.

Due to their immense size, Great Whites commonly roam the open offshore waters where they have much more room to move about.

Unlike the Great White, it’s fairly common for Bull Sharks to venture up into rivers that connect to the sea and some have even been found hundreds of miles from the ocean. In one case, a pair of Bull Sharks were discovered to have swam all the way up the Mississippi River to an area near St. Louis, Missouri in the American Heartland.

The Bull Shark is also one of the most prevalent of all the shark species in the world and is estimated to have a population that biologists and other scholars believe to be the fourth-largest shark population.

These sharks are actually the second-largest species of predatory shark behind the mighty Great White.

The easiest way to tell these two species apart is to take a good, long look at their overall body color. The subtle tones and changing colors on each sharks’ body will usually be a giveaway.

If you’re looking at a shark that’s roughly 8 to 10 feet long, it’s often hard to determine whether you’re seeing a mature Bull Shark or a young Great White Shark.

When it comes to Bull Sharks, their upper body around the top of their backs usually has a light grey or even a brownish tone that gradually shifts into a much more visible white color along their belly.

It’s fairly common for anglers and anyone with very little experience on the ocean to think that a Bull Shark is actually a Great White.

For the Great White Shark, the color shift is much more evident. These massive fish species will have the same grayish coloration along their backs all the way down to the middle of their bodies.

When their color changes from grey to white, it’s more of a sudden shift and it almost resembles a line where the grey and white colors meet.

The tail is another part of a shark’s body that you can use to tell the difference between Great White Sharks vs Bull Sharks. For many Bull Sharks, their tails are much longer and more slender on the upper portion.

This allows them to have short, sudden bursts of speed that they’ll use to chase down their prey. Great White Sharks, on the other hand, have a tail that looks much more symmetrical and has a much thicker tail fin compared to the Bull.

It’s no secret that the Great White Shark likes to roam the open ocean more than the Bull Shark typically does. The most obvious difference between Bull Sharks and Great Whites is their habitat, which is directly tied to what they are eating and hunting.

Great White Sharks are right at home in the vast, open ocean where it might be many hundreds or even thousands of feet deep. They are not known to have many predators at all and are usually the apex predator in about 90 percent of the waters they venture into.

If you’re an avid beach-goer who happens to see a shark prowling along the shallow waters near the shoreline, there’s a very slim chance that you’re looking at a Great White Shark and a very good chance it’s a Bull Shark. Bull sharks are right at home in shallow water that might only be about 10 feet deep.

Bull Sharks are also known to be much more exploration-oriented and will venture far outside of their normal habitat into rivers and other places in search of any type of food they can find.

Which Shark Species is More Likely to Attack Humans?

It’s a fairly well-known fact among those familiar with sharks that Great Whites are one of the least dangerous when it comes to posing a threat to humans.

This is mostly because Great Whites live in deeper waters that are far away from the shoreline and they live in areas where people typically don’t swim. However, in the few instances where they do venture into shallow waters and attack people, the effects are tremendous and almost always fatal.

You’re much more likely to be attacked by the smaller, more aggressive, Bull Shark. This is simply because Bull Sharks are known to live very close to the shore of most beaches and very often swim up close to the beach in search of various types of prey.

Both Great White Sharks and Bull Sharks are incredible species of fish that should be treated with respect. It’s important to understand that the ocean is their home and humans are stepping into their world when we go into the water anywhere in the world.

The good news is that both Great Whites and Bull Sharks are one of the least-threatening species of fish in the world.

If we give them an adequate amount of space and be aware of where these sharks are likely to be in the water, we can avoid most encounters with sharks or significantly limit the risk they pose to our well-being.