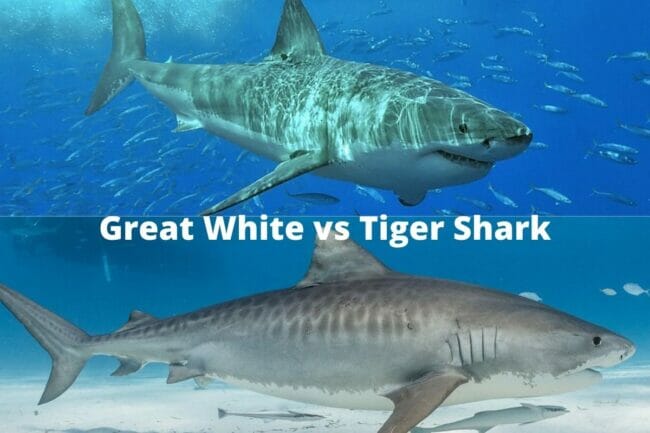 Two of the ocean’s apex predators are great white and tiger sharks. Each of these sharks often grow to exceptionally large sizes and both species can be found in virtually any part of the world’s oceans where there is temperate water throughout most of the year.

Many shark fishing anglers sometimes catch a tiger shark and mistakenly believe they have hooked a great white.

It’s sometimes difficult to tell the difference between the two species, so we’ve compiled this article to discuss some of the ways you can tell great whites vs tiger sharks apart.

Sharks are one of the ocean’s most feared creatures and there are many shark attacks recorded each year in various parts of the world. They are known to eat virtually anything they can in both shallow and deep waters.

While there are a select few people who are willing to be hoisted down into the water inside a cage to view these creatures up-close, many anglers are also brave enough to try catching one of these massive creatures on a rod and reel.

To the untrained eye, a great white vs tiger shark might appear to be very much the same, but these two species actually couldn’t be more different when it comes to their behavior, habitat, and other areas such as their usual diet. Both great whites and tiger sharks do have quite a lot of similarities, however.

Great white sharks and tiger sharks are two of the largest of the more than 500 different species of sharks that are found throughout the world.

If they manage to reach full maturity and have optimal conditions, both great whites and tiger sharks can grow to be well over 12 feet in length, with some great whites reaching sizes that would make anyone think twice about going for a swim in the open ocean.

Great white sharks are, by far, the most famous and feared species of shark in the world. They were the inspiration behind the famous movie Jaws, which was a film based on a true story of a killer great white that attacked multiple people on a section of the New Jersey coastline.

Great white sharks are very often portrayed in movies and popular culture as a mindless killing machine. However, great whites are actually known to be more docile when they are not hunting.

They are known to live in mostly cool waters that are usually between 55 and 75 degrees Fahrenheit. The most common regions of the world where great whites are found are around the United States, South Africa, Japan, the Mediterranean, as well as many other parts of the world’s oceans.

They are usually found in deeper water around the outskirts of coastal areas. Great whites might be found in water that’s less than 100 feet deep or even much closer to the shoreline.

They are also known to swim down into much deeper water that’s 1,000 feet deep or more with some tagged and tracked great whites exceeding 3,000 feet in some cases.

Tiger sharks derive their names from the dark, vertical stripes that are found on young tiger shark species. These predators of the sea are known to grow to very large sizes that rival that of the great white, but they are slightly smaller.

The tiger shark does not have the vicious reputation of the great white, but they are known to attack nearly as many people as great whites on a yearly basis.

While a great white might attack and swim away after realizing that a human is not the type of prey it commonly eats, a tiger shark will continue the attack. This is due to the tiger shark’s lack of ability to distinguish tastes and smells the same way a great white will.

Tiger sharks are known to prefer warmer waters than the great white and can usually be found in sections of the ocean with water temperatures ranging from 65 to 88 degrees.

A tiger shark usually stays in water that’s more than 100 feet deep, but they often come up into shallow offshore reefs to hunt. They can also be found in depths as far as 1,000 feet or more.

The IGFA world record tiger shark was caught in 2004 by a father-son duo off the coast of Australia. The monster shark weighed 1,785 pounds, which is more than twice the weight of an average tiger shark.

Great whites are known to grow up to about 15 to 16 feet in length, but there are tales from captains and others on the ocean seeing great whites that are roughly 25 feet or more.

Although the 25-foot great whites are more legend than anything else, there are records of anglers landing behemoth great whites on a rod and reel.

The IGFA world record great white is listed as a 2,664-pound giant that was caught in 1959 off the coast of Australia. However, there was a monster 3,450-pound great white caught off of Montauk, New York in 1986 that didn’t make it into the record books.

To qualify as an IGFA world record, a fish must be caught on line that’s no heavier than 130-pound-test and the Montauk monster was caught using 150-pound tackle.

Some of the major differences between great whites vs tiger sharks are evident, but a tiger shark will lose its distinct stripes once it grows to full maturity. These dark, vertical stripes will remain, but will be less defined as the shark continues to age. The following identification points can be used to tell a great white from a tiger shark.

A Great white shark gets its name from the color of its snow-white belly. Most other species of sharks will have a somewhat lighter-colored belly that might be gray, but the great white’s belly is unmistakable.

The tiger shark has a grayish-colored belly, which sometimes gets mistaken for a great white. However, once you’ve seen both types of fish, the white belly on a great white shark is a surefire way of knowing what type of species it is.

The obvious dark stripes of a tiger shark are another way you can tell these two large shark species apart. A great white will have a solid gray color on its back and sides white a tiger shark will usually appear to be a bit darker.

These faded stripes are often hard to spot when looking into the water, but from an underwater perspective, divers are often able to distinguish a great white from a tiger shark fairly easily.

Avid shark anglers commonly use a shark’s head shape as one of the main ways of identifying the fish they catch. This is mostly because the more popular species of sharks all have a very unique head shape compared to one another. Tiger sharks and great whites are no different.

Tiger sharks have a very square-shaped nose while the great white has a pointed nose shape. This is often more difficult to notice, but a great white’s nose will come down into a definite point whereas a tiger shark’s nose is more rounded-off and does not form this point.

The tiger shark’s tail is one of the ways anglers are able to firmly establish which type of fish they’ve caught. Tiger sharks have a very long tail fin that will stretch out higher than its body.

A great white shark’s tail is much more even with the top and bottom tail fin being the same length. This tail shape makes the tiger shark a bit faster than the great white, but both fish species can draw serious power with each thrust of the tail.

The overall body profile of a great white is another unmistakable identification point that most avid anglers can use to tell the difference between each species.

Great whites have a much greater girth and will be larger toward the middle section of their bodies. Tiger sharks are more thin compared to great whites and have a sleeker profile.

These two types of shark species are often a thrill to catch on a rod and reel, but it’s often a challenge just to get them to bite.

If you’re one of the few anglers who’s able to hook one of these types of shark, you’ll be able to tell the difference between a tiger shark vs great white using these four main identification points.