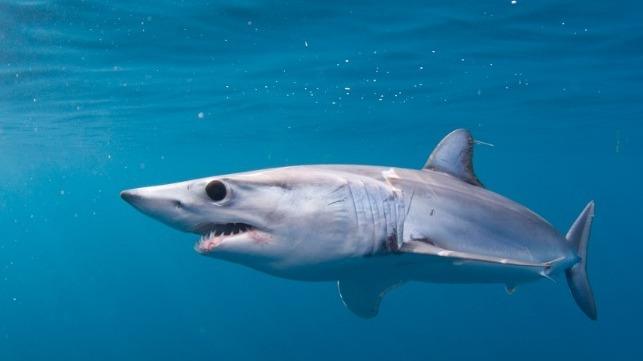 Mako sharks are known to be one of the most aggressive game fish that can be caught on a rod and reel.

Not only are they super aggressive predators but they are one of the fastest shark species and have a reputation for jumping wildly once hooked especially when in sight of the boat.

They also have a very impressive and highly visible set of teeth.

Catching these trophy pelagic’s is no easy feat and many days can out on the water can result in no fish but, with the right approach and knowledge you can increase your chances significantly.

The short-fin Mako is considerably more widespread than the long-fin and the majority of short-fin Mako fishing will be done in the 500 feet of water or less.

Mako shark fishing can be done by either traditional chumming and bait rigs or increasingly popular is high speed trolling for Mako.

Mako will happily feed on a wide variety of prey such as squid, tuna, bluefish and other sharks but it is the bluefish which is considered the best shark bait for Mako.

Although they can be caught inshore, it is offshore where you will find the best success usually with a lot of chum out.

Chumming for Mako shark is not much different from other species, a fairly standard chum would be a mix of mackerel and tuna ground down and tied off the stern in either a chum bag or a bucket.

I tend to favor bags over buckets as they can be easier to get a really long slick chum line out of.

Care and patience must be used when setting the hook.

A large Mako may take several bites of your bait before it gets the hook into it’s mouth and striking to aggressively and too soon is responsible for more missed fish than just about anything else.

I’ll run up to four rods in total with baits suspended at varying depths. Ultimately once a shark has the scent of your chum and has started to home in on it’s source the chances of them not seeing your bait is quite slim.

The most successful bait for Mako shark is without doubt live bluefish especially when circling under a kite. Mackerel, squid and menhaden are also very successful.

A large chum bag is almost essential and you need to have enough on board for a full days fishing.

Chum will draw them in from miles around especially of you throw smaller bait fish into the slick of the chum.

The smaller bait fish will draw in small fish in the 3 to 5 pound range. This fish and the sound and vibrations that they give off will help to bring in larger sharks, so don’t just throw in some chum and sit there waiting.

Fresh bait is almost always preferred over frozen or store bought so if you can either buy off the dock the day before and keep refrigerated or catch your own using lighter gear.

Mako shark gear will need to be at least a 50 lb class rod and reel and of course heavy wire leaders and circle hooks.

Fish of this size require a shark fishing rod with a lot backbone, a strong butt and top class guides.

Top quality shark reels need to be able to hold a lot of very heavy main line and also have the very best drag systems and internal gears.

I’d run 500 yards of 80 lb main line, with a shock leader section of 300 lb mono which is then attached to a six foot length of #15 wire crimped and connected with a heavy duty barrel swivel.

On some shark fishing charter boats you can see some monstrous shark setups running up to 8 lines but this is overkill and can become a tangled mess, 4 lines out in the chum around 20 feet down is more than enough for any boat.