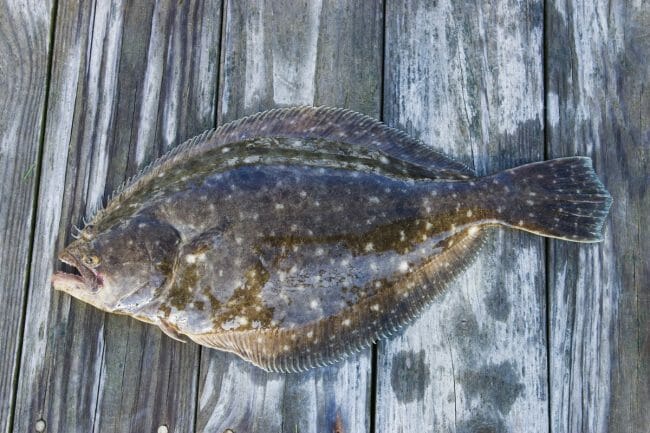 Flounder are one of the most sought after fish along the coastlines of North America. They are known as one of the most unique saltwater game fish in the world as they have a reputation for burrowing down into the sand and waiting on their next meal to swim within reach.

Flounder are specially adapted to hunt in this manner thanks to their eyes being situated on one side of their head.

Despite their freakish appearance, flounder are excellent table fare and many anglers consider them to be among the tastiest of any coastal fish species.

Flounder fishing involves utilizing certain techniques that would often not work for other species. Most anglers who target flounder will cruise around the shoreline in search of the distinctive tracks the fish leave behind when they burrow down into the sand.

These tracks are often hard to see from the shoreline, making it a bit more difficult when it comes to surf fishing for flounder, even in areas where boaters normally have great success.

To offset this disadvantage, anglers can use a variety of techniques that help them cover more of the shoreline’s bottom in search of these elusive fish.

If you plan to have a successful outing along the shoreline when it comes to flounder fishing, we’ve compiled a few of the most important tips you’ll need to know in order to be successful.

When to Fish for Flounder Along the Surf

Surf fishing is vastly different from targeting certain species of saltwater fish from a boat. While these fish typically roam around along the shore, catching them from one central location on the beach can be difficult.

Fishing from a boat will allow you to target flounder at virtually any time of the year, but surf fishing for flounder is mostly done in the warm weather months of spring into the early fall in most areas.

Flounder typically retreat to deeper water once the water begins to cool. They often swim out near large reefs where they will usually congregate in large numbers.

Their annual spawning ritual takes place in these deep waters and flounder won’t return to their summer time habitat along the coastline until the waters once again begin to warm.

If you plan to fish along the shoreline for flounder, it’s best that you do so throughout the spring and summer in order to have the best chance to catch anything.

Sometimes anglers can still catch flounder along the coastline in the early fall months, but they will begin to move out to deeper water when the water temperature drops below 60 degrees in most areas.

Being able to fish from a boat will allow you to utilize a number of deep water techniques and tactics to catch flounder in great numbers.

Most anglers often report catching bigger flounder in deep water as the more mature fish of the species are likely to be less pressured when they are in the sanctity of deep water reefs that are hundreds of feet or miles from the coast.

However, if you’re stuck fishing from the surf, there are certain ways you can maximize your efforts to bring in sizable flounder from the shore.

Where to Catch Flounder in the Surf

Surf fishing can be very confusing to those who are largely unfamiliar with fish behavior in the waves along their favorite beach. Some species of fish will avoid these areas while others seem to thrive in the surf and are regularly caught along the waves of most beaches. Flounder are one of the most common species of fish that you’ll find along the shoreline of any coastal area.

They often prefer the calmer waters near inlets and other areas, but you can also use certain techniques to probe the bottom for any flounder that might be lurking below the waves.

In many cases, flounder prefer burrowing down into the sand in areas where the tide is changing because this will usually be their best chance to ambush unsuspecting bait fish or other creatures.

It’s often nearly impossible to spot flounder in the surf since the crashing waves usually distort the water so much that anything on the bottom is mostly indistinguishable from the sand itself.

In most cases, people will only realize a flounder is nearby when they almost step on them and the fish quickly darts away, leaving a cloud of debris in its wake.

If you’re planning to fish along your favorite beach for flounder that might be burrowed into the sand among the waves, there are a few very useful strategies that will typically bring you success in your efforts.

Beach fishing typically involves using a long, heavier surf rod and large surf reel to cast a variety of different kinds of bait well past the breaking waves and into the calm waters beyond.

Unlike the average method for surf fishing, you won’t have any success by casting your line out and placing your rod in a holder only to sit and wait for a flounder to bite. Instead, you’ll need to be proactive in your search for flounder and scour the beach with your rod and reel.

Anglers who are willing to make plenty of casts along their chosen beach will usually find a few flounder hidden among the waves if they use the right tactics. Since you won’t be able to get a sense of exactly where the flounder will be in the surf, you can use your bait to probe the area.

There are a few types of bait you can use to fish in a ‘fan’ pattern that allows you to thoroughly cover every square foot of the ocean floor along the coast.

While it’s typical for most surf anglers to cast their lures and bait out as far as they can, you’ll only be wasting your time doing this for flounder fishing.

Your best strategy when it comes to fishing along the surf for flounder involves casting the lure or bait out about 20 feet and slowly working it back in towards the beach. In many cases, flounder prefer to stay closer to the shore in an effort to avoid predators like sharks or other fish.

Shrimp is the most popular menu item for flounder and you can choose between various soft plastic lures that are designed to look like shrimp, or the real thing.

Using real shrimp will appeal to the flounder’s sense of smell, as well as their eyesight, but you should be aware that other species of fish might easily tear the bait off your hook before you have a chance to catch your target.

You’ll likely find that using the imitation shrimp lures is less frustrating than having to stop and put more bait on your hook every few casts. Most anglers who have success fishing for flounder in the surf prefer to use a combination of a bucktail jig along with a shrimp lure.

You’ll want to tie the shrimp lure on a few feet behind the bucktail jig on the same line. The jig will act more as a sinker than an actual lure in this instance and the flounder that you’re after will most likely focus on the shrimp as it makes its way over their position. Be sure to fish slowly and thoroughly work the rig over every inch of coastline.

You’re more likely to have success fishing this style rig along areas that feature depth changes. Flounder like to burrow down on the low side of a ledge or dip in the bottom and use it as a spot where they will ambush their prey. If you’re aware of a ledge like this, work it very thoroughly and you’ll likely get a bite from a flounder at some point.

You can also swap out the shrimp lure for any kind of natural bait you want to use. There are instances where flounders might be more apt to bite cut bait or even small crabs instead of shrimp.

The key to flounder fishing is to remember that they are stationary fish and will not move from their location unless forced to by humans or large predators.

With this in mind, you should exercise patience when fishing an area of the surf for flounder. Eventually, you will get a bite.

When you do finally have a flounder bite your lure, you might realize that they will not aggressively strike at it like other saltwater fish species. Instead, flounders will sometimes be more subtle and bite the lure without trying to run away.

If you’re working the rig along and feel weight on the line, don’t try to set the hook immediately. Wait a few seconds and lift the line again to feel for any movement.

If you use this method, you’ll have plenty of success and will be able to find the right spots in the surf along your favorite beach for flounder fishing.