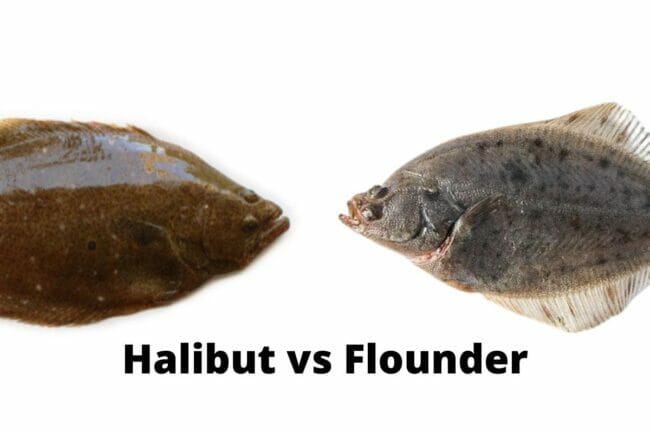 Halibut and flounder are two very similar fish in quite a few ways. They share a variety of different characteristics and look virtually identical in shape and proportions, except for a few differences.

Flounder can be found in many different locations throughout the world while halibut are mostly confined to the waters of the north that are known to be cold and deep.

Both fish are heavily-favored by those who love to enjoy a good seafood meal with tasty fish fillets.

Halibut and flounder each have plenty of flavor in their meat, yet there are some stark differences in relation to the overall texture and consistency of flounder and halibut meat.

What is a Halibut?

Halibut are a member of the flatfish or flounder family and very closely resemble the common flounder that are caught throughout most beaches and inlets of coastal waters around the United States.

Halibut are perhaps one of the most popular fish that can be found in the cold waters surrounding Alaska and nearby areas. They are known to have the capability to grow to massive sizes and are said to be able to live up to 30 years in some cases.

They are a very peculiar fish in that, when they are born, they swim vertically just like most other fish until they reach an age of about five weeks.

After this time, one of their two eyes starts to move across their head to the other side and halibut will then begin swimming horizontally in the same way flounder are known to do.

Halibut spawn in the frigid winter months in exceptionally deep water of about 1,200 feet or sometimes more.

Most halibut weigh at least 50 pounds when they reach full maturity and some can go on to reach unreal sizes in the cold, dark waters off the Alaskan coast.

The largest halibut ever caught is said to be a 515-pound behemoth that was landed off the coast of Norway in 2013.

What is a Flounder?

Flounder are known to live along most coastlines throughout the world from North America all the way over to the European coast.

There are many different species of flounder and they are among the most hideous-looking fish in the ocean that can be found near the shoreline in many places.

These fish live along the coast and will often make their way up into the estuaries around where some rivers empty into the sea. They have peculiar habits and are known as one of the most highly-adapted ambush predators in the entire ocean.

Their feeding habits take them very close to the shoreline during the warmer months out of the year, but anglers have been known to catch them in very deep waters during the winter when they retreat back into the deep where they are also known to spawn during the cold months.

Flounder are known to eat a number of small creatures that range from crabs and sand fleas to small bait fish that happen to swim within striking distance.

The fish will bury itself down into the silt or sand along the bottom so that just the eyes are visible, which allow it to peer out and watch for unsuspecting baitfish to swim by.

Many anglers are able to spot them or see where flounder have been laying due to the fact that their body leaves an outlined imprint in the bottom, which is known as a ‘flounder track.’

They are a favorite target of many sportsmen in the United States and are capable of growing to more than 20 pounds in some cases. The world record flounder is said to be a 22-pound monster that was landed off the coast of New York in 1975.

The Difference Between Halibut and Flounder

Halibut are much larger than flounder, but are also known to have a slightly different body shape, as well as some other differentiating factors that set them apart from one another.

There are many similarities between halibut and flounder, but there are also some differences you need to know when it comes to comparing these two types of fish.

Halibut can grow to massive sizes with some anglers reporting the existence of 600-pound giants roaming the deep waters off the Alaskan coast. They share the same brownish coloration that many flounder have on one side of their body where their eyes are located.

A halibut’s eye’s will almost always be ‘right-facing’, or in other words, they will be situated on the right side of their body.

The other side of their body is a pale white color that is starkly different than the other side. Most anglers can tell a halibut vs flounder apart just by the sheer size of each fish, but when you catch one that is smaller, it can sometimes be tough to tell which one you’ve got in your boat.

Each fins are pointed straight out away from the fish’s body and will taper back towards the tail.

Flounder share many similarities to halibut with a few exceptions. They don’t grow to be nearly as large as their massive halibut cousins and will only reach about 15 to 20 pounds in most cases.

If you have a fish that’s smaller than this and you aren’t sure what kind it is, there are a few identifying factors you can look for.

The flounder’s tail is also rounded and is much smaller in proportion from the halibut’s tail, which can be very large and pointed outward. While a halibut’s eyes are almost always situated on the right side of the fish’s body, flounders’ eyes can be located on either the right or left side of its body.

Are halibut good to eat?

Halibut is just as edible as flounder, but answering the question of whether one tastes better than the other is one that might be hard to assess. Halibut are well-known for being packed with essential, healthy nutrients that our bodies need to function properly.

Their meat is also lacking in the type of fat that you commonly find in most other fish, especially ones that live most of their lives in the cold, deep waters such as the Alaskan coast.

These fish have a taste that’s described as very mild and somewhat sweet. It’s not overly fishy like some other sportfish and many people who are sensitive to strong fish tastes are able to enjoy halibut in a variety of different cooking methods.

Their meat is known to be very firm and will hold together when grilling quite well compared to flounder, which is very flaky. You can cook halibut on the grill, in the frying pan, or in a variety of different ways and enjoy these giant deep-water fish.

Are flounder good to eat?

Despite their reputation as one of the ugliest fish in America, flounder have a reputation for being one of the tastiest fish you can find along the country’s coast.

Like halibut, flounder are known to have a very pleasant, sweet tasting filet that is also very mild compared to other fish. Many people prefer flounder meat over most others because it is incredibly soft and tender instead of being firm and chewy.

There is no fish that’s quite as tasty as fresh-caught flounder and it’s a must-have menu item for any reputable seafood restaurant along the eastern coast of the United States, especially in Florida.

Flounder have slightly more fat in their meat compared to halibut and you obviously won’t get the same massive amounts of meat off of a flounder as you will a mature halibut.

Flounder can be grilled, fried, baked, or cooked in virtually any way you desire and their meat will likely be as tasty as any fish you can catch along the United States coast.

Flounder fillets will often fall apart while eating them, especially when they’ve been grilled. Many people prefer to leave the skin on when grilling flounder to help hold the meat in place until it’s ready to be served.