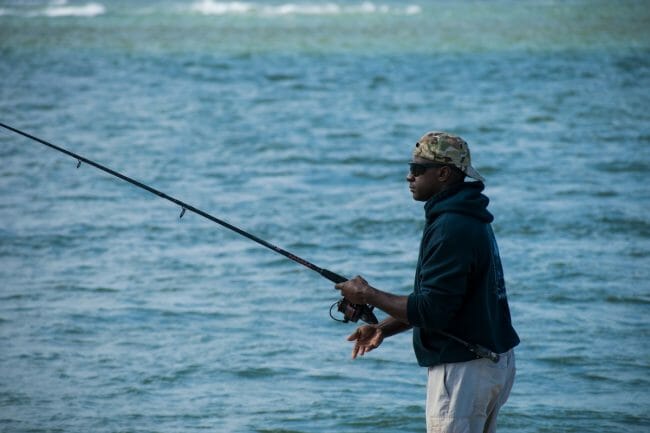 If you’re not very well-versed in the world of surf fishing, some of the tackle and gear used, as well as the strategies, might be totally foreign to even the most skilled anglers.

There are a number of different strategies and tactics used in surf fishing that don’t apply at all to freshwater or even offshore deep sea fishing.

When it comes to the question of whether or not you need to be using a shock leader for surf fishing, there is no truly definitive answer for every scenario.

In some cases, shock leaders are an absolute must-have item among the rest of your gear and tackle while in others, it might not matter that much at all.

Read on if you’re interested in learning more about shock leaders and are wondering whether you should be using one on your next surf fishing trip at the beach.

What is a Shock Leader?

A shock leader is basically a heavier length of line that’s a few feet long and is used to prevent you from breaking your line when casting out into the surf.

You won’t have to use a shock leader for freshwater fishing or even fishing along the saltwater inlets and offshore reefs out on the ocean. These are exclusively used by surf fishing anglers and they play a major role in the overall function of a surf fishing rig.

Surf fishing often requires making very hard casts to get the bait out as far as possible. Anglers will use surf fishing rods that are longer and better suited for catapulting their rig out well over a hundred feet or more into the ocean.

Having a shock leader helps to absorb the extreme amount of pressure caused by a heavy rig that consists of a baited hook and sinker.

Shock leaders are usually a few feet in length, up to about 40 or 50 feet in some cases depending on what the angler is targeting and the weight of their rig.

Another way that a shock leader helps improve your overall performance on the water is by protecting your main line that is spooled onto your surf reel from developing any abrasions or nicks that could cause your line to snap.

Leader line is often very thick and heavy, with some anglers using well over 100 pound test for surf fishing.

When to Use a Shock Leader

You don’t always have to use a shock leader when surf fishing, but it is something you should certainly consider if you’re using a heavier presentation and trying to cast your surf fishing bait out as far as possible.

Whether or not you’ll need to have a shock leader really depends on what surf gear and tackle you’re using, as well as what kind of fish you’re planning to target.

Mono vs Other Lines

Mono line has more ability to stretch than any other type of fishing line due to its composition and the fact that it’s made of basically one single strand of material.

Having several feet of much heavier line on the end of your main mono fishing line helps to offset the weight capacity and force that you’re putting on the main line and increase its ability to stretch.

This also helps you launch your surf fishing rigs out much farther than you would by simply using only your main monofilament line because the heavier mono leader is usually capable of stretching to a greater degree.

If you are fishing with a heavier rig, such as a bigger hook and larger sinker used for species like sharks or other very strong fish, it’s usually a good idea to tie on a shock leader just to make sure you don’t snap your line.

The only instance where you certainly won’t need a shock leader is when you’re using a heavier braided fishing line. Braid is much stronger than mono or fluorocarbon fishing line and is made up of multiple strands of highly durable material.

You shouldn’t expect braided line to have the same stretching capability that mono does, but it is much stronger and will usually hold up well, even if you’re fishing with a heavier rig.

What Size/Length Shock Leader Should You Have?

When it comes to deciding whether or not you really need to be using a shock leader, the answer is usually yes. But how long should the shock leader be? How heavy should the line be?

There are a few rules of thumb that most surf fishing anglers go by to make sure they’re getting the right amount of durability and stretch in their shock leaders.

The first thing you need to calculate is just how much your rig weighs. This includes the sinker, hook, and bait. If you have a solid understanding of the weight, or even just a rough estimate, you can usually count on the fact that you’ll need at least 10 pounds of line strength for every ounce that your rig weighs.

In other words, every ounce you have on your rig translates to an increase in your line test of at least 10 pounds.

This is virtually true for nearly any rig, no matter how heavy it might be. Always go with a monofilament line as a surf fishing shock leader so that you get the most ability to stretch as you cast.

The length of the shock leader is another common question that anglers have. You certainly don’t want to have a shock leader that’s too short and doesn’t adequately serve its purpose.

Most anglers will use different lengths depending on the type of fish they’re going after or how heavy the line might be, but it’s better to be too long than too short when it comes to shock leaders.

Your shock leader should typically be at least 2 or 3 rod lengths long, or roughly 25 to 30 feet in length. Some anglers will actually measure this length, but most surf fishing enthusiasts rely on a rough estimate to make sure they have the right amount of shock leader for their particular rig.

It’s also very important that you secure your main line to the shock leader very firmly and tie them in a formidable knot to ensure that it won’t break or come loose.

Using a shock leader with your surf fishing rig is not only something that will prevent you from losing your bait, hooks and sinkers. It will also help to make your fishing experience safer for you and everyone around your position.

A line that happens to break when you make a very hard cast out to sea can be extremely dangerous and pose serious risk to anyone that might be in the way.

Shock leaders can save you a huge amount of frustration when you’re fishing around rocky areas with lots of cover as the line will be more capable of withstanding the rough underwater terrain.

By knowing just when you need to have a shock leader, as well as tying on the right kind of shock leader and using the proper amount of line, you’ll greatly increase your angling success along the shoreline and have much more confidence in your equipment and tackle.