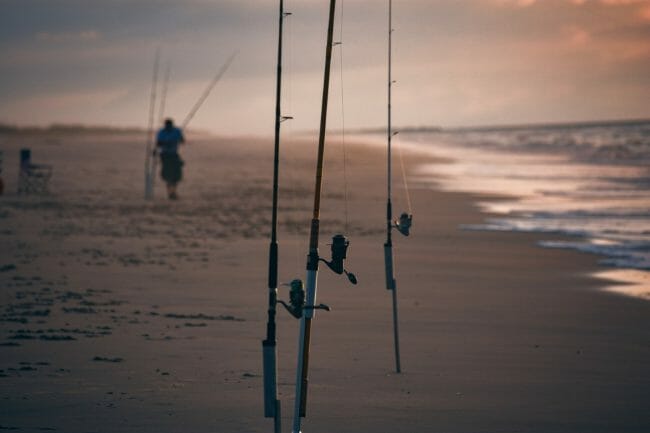 Choosing a surf fishing reel means matching your reel to a rod with the correct power rating and action will allow you to make pin point casts out beyond the crashing surf.

Most anglers will choose a spinning setup but for really long distance casting a baitcast or conventional reel can be the better option particularly if you are using very heavy rigs.

If you are just stating out with surf casting then I would advise a spinning reel as baitcast/conventional reels do have a steeper learning curve than a spinning reel.

A spinning reel will also cast lighter weights easier than a conventional reel assuming you have it spooled correctly with the right line.

What Size Reel for Surf Fishing?

A 5000 or 6000 is the best size reel for surf fishing assuming you are not targeting very large species like shark from the shore.

If you are fishing very light setups from the beach then your performance may be better on a size 4000, but this would be for very light tackle fishing.

Just because you might be targeting smaller species does not mean that a larger species won’t take your bait and having a decent sized reel with a larger spool is the safer option.

Penn have a well earned reputation for building some of the highest quality reels available.

Penn is so sure of the Spinfisher VI’s ability to resist salt water that they say it doesn’t need to be washed in fresh water after usage.

I’m not sure about you, but I’d still rinse any reel as a precaution.

Penn’s build quality has become legendary, and they have almost written the book on how big saltwater fishing reels should be designed.

The Spinfisher VI differs from the V in that it has better CNC gear technology and IPX5 sealing.

The IPX rating is a standard that defines a product’s water proof and water resistant characteristics.

In contrast, the more costly Penn Slammer III mentioned below has an IPX6 rating.

The 2500 to 5500 have an automated bail trip, which means that after casting, you just spin the handle and the bail flips back into place, while the 6500 and above have a manual bail closure only.

The true draw of the Spinfisher is its HT-100 carbon fiber drag, which is protected by a fully sealed spool and stays silky smooth under strain even after extended usage.

The Daiwa Saltist is one of the most popular salt water reels and you’ll see them used in various sizes for just about any style of fishing.

They are used extensively in the smaller sizes for casting off of piers and jetties.

As a surf fishing reel they are great for light to medium sized setups and due to their fast retrieve can haul in line quickly when needed.

Because of how nicely the Saltist is constructed, the lesser sizes are a bit hefty for all-day casting.

Daiwa has put a lot of effort into making the Saltist as resistant to the corrosive effects of salt water as possible. Once salt water seeps into the housing and bearings of a reel, it will damage it; always clean your reels in fresh water as quickly as possible after usage.

With the exception of the watertight Carbon ATD Drag, the Saltist is almost entirely made of metal. There are no expensive or unusual materials used, just sound engineering and very tight tolerances.

The eight main bearings and one anti-reverse bearing are constructed of a corrosion-resistant stainless steel.

When it comes to surf casting, a 5000 or 6500 is the way to go since you get a lot of line capacity coupled with a significant increase in retrieve rate when compared to the smaller models in the range.

If you are looking for a conventional baitcast reel for surf casting then one of the most common reels to use as a beginner is the Penn Squall II Star Drag.

Star drag reels do not have a level-wind system in place that you will find on larger reels that are more geared towards trolling and jigging.

The removal of the level wind system means that there is less friction running on the spool as you are casting.

Ideally you want the spool to completely disengage from all the internal gears when casting, this is often referred to as free spooling.

A free running spool will give you excellent casting performance.

There is a learning curve with no level wind reels as you need to lay the line down in an even manner with your thumb as you retrieve. The better you get at this over time the easier the line will run off the spool when you cast.

Like most conventional beach casting reels with the Penn Squall II you will need to tweak and adjust the drag initially to get the right performance.

If you are new to conventional reels then you should spend a full day tweaking your set so that you have the right settings for the size of weights you will be throwing.

The Squall II has a graphite frame to save on weight unlike the larger Fathom that has an all metal design.

Graphite does not suffer from corrosion in saltwater as metal frames do although they will not be quite as strong as an all metal design, for most surf casters this is not an issue.

The Squall Star Drag employs six shielded stainless steel ball bearings that are protected from saltwater infiltration and intended to resist saltwater corrosion if they do get wet.

To prevent the spool from reversing under pressure, a single anti-reverse bearing is utilized, which is backed up by a quiet ratchet mechanism that employs a conventional dog.

The Squall Star Drag’s magnetic braking mechanism is adjusted through a dial, which is preferred than a slider since it reduces the possibility of seawater infiltration. This is only available on the models 12 and 15.

Penn’s Versa-Drag system is made of extremely durable carbon fiber and provides a very smooth drag. The HT-100 drag washers on these reels give between 15 and 20 pounds of drag.

The HT-100 drag washers have been proven to resist pulling 100 miles of line from the reel, which is a lot of line.

The Slammer III is the third model in Penn’s highly popular Slammer series of saltwater spinning reels. It is designed with corrosion resistance in mind.

The Slammer III is the third model in Penn’s highly popular Slammer series of saltwater spinning reels. It is designed with corrosion resistance in mind.

Penn has gone to considerable lengths in terms of construction, design, and material selection when it comes to the Slammer’s components.

These reels, which range in size from 3500 to a whopping 10500, feature large spools for storing a lot of line and an extremely strong drag mechanism.

The size 10500 is the largest in the series, with a whopping 60 lbs of maximum drag force, which is extremely enormous for an open face reel.

If you’re searching for a tough spinning reel for shark fishing, the Pen Slammer III is the reel for you.

The Ultegra XTD from Shimano is a purpose built spinning reel for long distance surf casting.

These make a great entry level surf reel and as they come with two spools a very versatile one too.

You could run two different surf rods with this reel one for heavier work and one for lighter.

For the price they are not as well sealed as some of the higher end offerings from Penn above so make sure that you do not dunk them in the water or if you do make sure to rinse it thoroughly and regularly clean and service it.


It also comes with a spare spool and spool shims that allow you to add lighter line to the spool without having to load it up with double the amount of line.

The shims make the center of the spool wider allowing you to use the spare spool for lighter surf setups, yet you still get the advantage of the extra wide spool casting performance.

So as an example you can run one spool with 40lb line and the other with 20lb which should cover most surf fishing scenario’s.

Buy on Amazon
Scroll to top