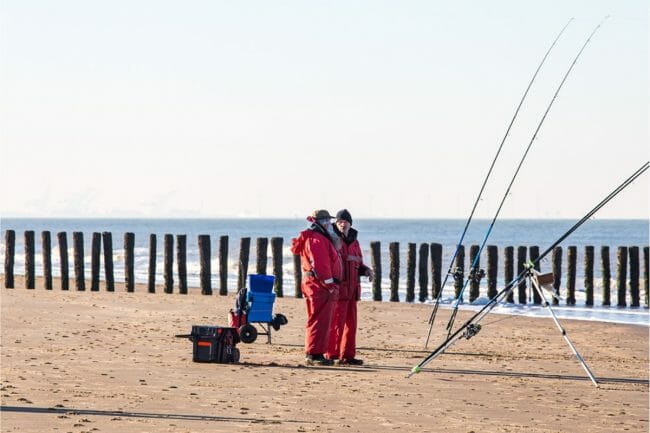 Surf fishing requires the use of a certain set of gear items that are mostly unnecessary when it comes to inshore fishing around inlets and flats, as well as offshore angling.

Fishing from the beach means you’re constantly dealing with the waves that are sometimes incredibly strong and able to pull your bait out of position toward the shore, or away from it.

If you want to be a skilled surf fishing angler, you’ll need to have the right gear that will allow you to adequately deal with the surf, as well as the many other factors that play a role in your overall success on the beach.

In this article, we’ve compiled a surf fishing gear list of 11 items that every angler must have before they plan their first surf fishing trip.

When it comes to surf fishing rods you’re going to need a rod that will be quite different from deep sea fishing or any other kind of angling you might do in freshwater or saltwater.

For most species, you’ll be required to cast your bait well beyond the crashing waves in order to get it to the right spot where certain species are found.

In order to do this, you’ll need a longer rod that is capable of launching the bait and your rig out to a much farther distance than you could with any other rod.

It’s also crucial that you have a rod that is strong enough to withstand the heavy weight and pressure you’ll experience from fighting most of the popular saltwater game fish species. Even some of the smaller species that are caught in the surf will put an exceptional strain on your rod, so it’s critical that you have one strong enough that won’t break.

You’ll need a bigger, stronger rod for surf fishing and this concept also applies to the reel you’ll need to use. The best surf fishing reels needs to be big enough to hold a decent amount of heavier fishing line, such as 20 or even 50 pound test in some cases.

The reel should also have a good drag system that will help you in maintaining control over your line and the fish when you’re in the middle of an intense fight.

Although there are a number of different reel types for fishing, spinning reels and conventional reels are by far the most popular for surf casting.

The best fishing line for surf fishing is going to be one that’s heavier than what you’ll use for inshore fishing or especially for freshwater angling in lakes and rivers.

It’s recommended that you use monofilament fishing line for fishing in the surf because it has more stretching ability and makes it easier for you to cast farther in most scenarios.

It’s very important to use a shock leader line when surf fishing. The purpose of this shock leader is to withstand the extreme amount of pressure that you’ll put on your line when you make a very hard cast while using heavier surf fishing rigs and bait.

While most fishing lines might normally snap under such pressure, a shock leader that’s at least 50 pound test monofilament line is able to stretch and keep your line from breaking under the immense pressure.

As you might expect, surf fishing requires the use of bigger hooks if you intend to go after larger-sized fish. Shark anglers, especially, will typically use hooks that are as big as 8/0 or 10/0 to make sure they are big and strong enough to hold up against a powerful predator like a shark.

Most anglers will use a circle hook for surf fishing. These hooks are usually much less likely to injure a fish and give it a greater chance of survival if you do have to release it.

There are a huge variety of sinkers that are commonly used in surf fishing. Most anglers prefer to use a pyramid sinker because this type is designed to dig into the sandy bottom and hold itself in place much better than a rounded sinker thanks to its pointed end.

If you’re fishing in especially rough water with a very strong pull that might rip your surf bait out of place, you can use what’s known as a sputnik sinker to help provide extra stability.

The key to choosing the right kind of sinker for surf fishing is to understand what type of fish you’re going after and to also have a good knowledge of how the bait presentation will look and function underwater.

Keeping your bait in place and your rod secure is a big part of being a successful surf fishing angler when you’re using a rig that is meant to sit in place in the surf. Using a sand spike is crucial in accomplishing this and will give you a huge advantage on the beach.

Most anglers will use multiple rods and will set them in certain intervals apart from one another, keeping them in place using a sand spike.

Like anything else pertaining to fishing equipment, you can purchase better quality sand spikes, but it will likely cost more than some of the cheaper models.

Surf fishing involves the use of a big variety of different gear, tackle and equipment. Unlike anglers who fish from a boat, anyone who goes fishing from the surf is required to transport their gear onto the beach by hand.

Using a fishing cart is a huge asset in regards to keeping your gear together in one central location and allowing you to move it relatively easily across the sand.

You can’t use any type of cart on the beach and most anglers quickly find out that the sand can render most carts useless unless they have the right kind of tires.

Purchasing a good quality fishing cart for your surf fishing trips will be a solid investment that will pay off greatly in the long run if you plan to do a lot of surf fishing.

It’s no secret that most of the game fish species you’ll catch when surf fishing will have sharp, pointed teeth that are capable of doing a great deal of damage to anyone who happens to get their hand caught in the fish’s mouth.

It’s very important that you have a good pair of fishing pliers for surf fishing to help you remove the hook from the mouth of your catch. Using a pair of pliers is also better for the overall health of a fish as it means you’ll be less likely to injure it when removing the hook.

Taking the hook out can be a delicate process, but using a good pair of fishing pliers goes a long way in making sure it’s done quickly and easily.

You might not think that it’s important to be able to see into the water when you’re surf fishing because the waves and the foamy water make it very difficult to catch sight of any fish that might be swimming along the beach.

However, wearing a good pair of polarized sunglasses will give you much more of an advantage than you might think as you will be able to see into the water more easily and will be capable of spotting structure, fish, schools of bait fish, and lots of other things that surf fishing anglers need to know about.

Wearing a good pair of polarized sunglasses will also help to protect your eyes from the harsh sunlight and UV rays that reflect off the water’s surface, which can cause damage to your eyes over long periods of time.

Surf fishing involves being out in the sun and wind for long periods of time, which can do quite a bit of damage to your skin over the course of several hours.

As anyone who spends a great deal of time on the beach already knows, it’s important to protect your skin from the sun and the heat if you want to stay comfortable.

Make sure you are wearing a shirt and hat that will not only block the sun’s UV rays, but will also help keep you cool through the long hours you’ll spend sitting or standing on the beach while fishing.

It’s also a good idea to bring along a rain jacket in case a small pop-up rain shower comes along. Most anglers know that fish tend to bite more often when it’s raining and you’ll be able to catch more fish if you are ready and equipped to deal with the rain.

If you dress appropriately, you’ll be much more comfortable and will enjoy your surf fishing trip a lot more than if you decide to wear clothes that are not well-suited for the beach.

You’ll need to keep your drinks and snacks cool and protected from the heat, which can be sweltering sometimes when you’re surf fishing.

There are plenty of different cooler models that will work for surf fishing to keep these items cold, but you might also want to have a cooler that’s designed for keeping your fish cold after they’re caught.

Just like most other gear and equipment items related to surf fishing, you can expect to pay a bit more for the better quality fishing coolers that are able to hold your fish. A quality cooler is a good investment and you’ll be able to haul this and your other gear if you have a decent surf fishing cart.