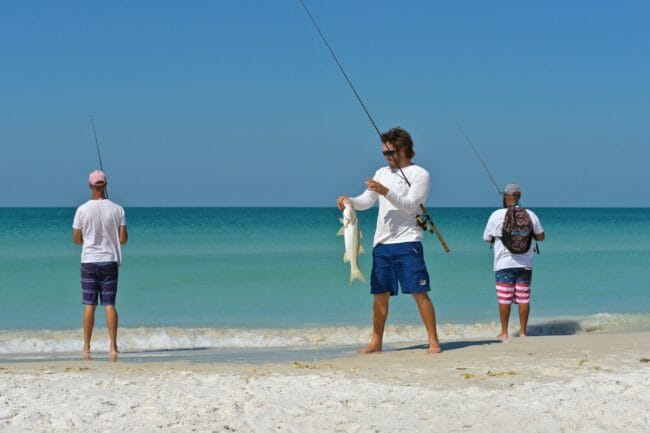 There are an abundant number of different fish species you can catch along the surf at any beach. Some of the larger varieties of fish require the use of large, heavy tackle to not only cast your rig out as far as possible, but to also bring in your catch.

Surf fishing with light tackle is also very popular as there are plenty of smaller fish species that are considered excellent table fare, or just fun to catch.

Light tackle surf fishing is a great way to test your angling skills and truly challenge yourself when it comes to catching fish in the waves.

There are several unique techniques and tactics you can make use of with light tackle when surf fishing and some of them are highly productive for the most sought after saltwater fish species.

In this article, we will cover the basics when it comes to light tackle surf fishing and also explain the best strategies you can use and why they work.

There’s nothing overly complicated about light tackle surf fishing. It mostly requires that you stick to the basic rules and techniques that most anglers are already accustomed to using if they’re well-versed in freshwater fishing.

The basis of any type of surf fishing, whether you’re going light or heavy, revolves around why type of fish you’re aiming to catch.

If you’re targeting bigger fish, you’ll obviously need larger line, hooks, sinkers, rods and reels, but light tackle is much simpler as you won’t have to deal with so much big, heavy gear.

When using light tackle to catch fish in the surf, there are a few specific areas you’ll want to pay close attention to in regards to your setup.

It’s important to make sure that your rod, reel, line, and other components are strong enough to withstand going up against the might of the waves, as well as the fish that are likely to bite your lure or bait.

When you do catch a fish, it becomes more of a challenge to get it onto the beach using light tackle because you’re more likely to have the line break or have the fish give you a stronger fight against your reel’s drag.

You can use light tackle to catch anything from sea trout to pompano and species like mackerel and many others from the beach. It’s also a bit more fun trying to wrangle these feisty fish species by using lighter rods and reels.

There are anglers who would much rather use light tackle in the surf to catch these smaller species than to lug big, heavy rods onto the beach and try to catch larger-sized fish.

Pompano are arguably the most popular species of fish you’ll catch from the surf with light tackle. They’re smaller than most other saltwater fish you will catch, but pompano are known for being tenacious fighters that will put most light fishing tackle to the test.

If you fish inlets and flats around coastal areas, you’re probably already accustomed to catching sea trout, but these slender fish species can also be caught from the surf. They’re one of the most popular fish along the southern coastal states along the Atlantic and into the Gulf of Mexico.

There are other species like red drum, flounder and striped bass that can be caught using light tackle in the surf. These fish are one of the most exciting to target and fight as they can be found on virtually any beach and have a reputation for putting up a formidable fight against light tackle.

If you’re planning to use smaller bait or lures, you’ll need a lighter rod in order to have the ability to cast out as far as you need.

In most instances, the fish you’re after might be just a few dozen feet into the foamy surf at the edge of the beach, but going after some species requires that you have the ability to cast out pretty far.

You should be aware that these lighter rods are much more likely to snap when you’re fighting a bigger-sized fish, so it’s crucial that you’re very careful if you do happen to hook something larger than what you’re expecting.

If you’re going after fish and trying to use a more subtle bait or lure presentation, having a lighter rod will also allow you to create more lifelike twitching motions and other movements.

Some lures such as spoons are meant to be retrieved with a twitching or slight movement along the bottom.

Being able to create this type of movement while the waves are pulling and crashing around the lure is tough, but you can manage to attract certain fish if you’re patient and understand just what to do with your rod and lure.

Some of the best light tackle surf fishing rods that you can use are basically the same style that you’d employ for freshwater fishing scenarios.

Brands like G. Loomis, St. Croix, Penn and others are excellent when it comes to making lightweight rods and reels that are perfect for fishing with lighter tackle.

When it comes to the saltwater spinning reels for light tackle, most experienced anglers will use a size 2500 or even as large as a 4000 in some cases.

You’ll be using lighter fishing line, so you won’t need to have the bigger spools that most surf fishing rod and reel combos offer.

Using a lighter rod for surf fishing opens up the possibility for you to fish with different lures than most surf anglers.

In most cases, surf fishing enthusiasts will use a large rod that’s made to launch bait out as far as possible, but a lighter rod allows you to have a greater amount of control over the lure’s movement in the water.

In most cases, you’re using specific types of lures that are tailored to only catch a certain species of fish. Jerkbait lures are one of the most popular surf fishing lures that are capable of catching a wide variety of fish if used in the right way.

These lures will stay on top of the water and only dive just a foot or two, in most cases, below the surface. You can jerk or twitch your rod to produce the type of erratic motion that entices many game fish species to bite when they’re cruising along the beach looking for their next meal.

Spoons are another ideal choice of lure for fishing with light rods and surf reels as you can also use them in a variety of different ways to catch fish.

For many avid surf anglers, spoons allow the opportunity to vary their retrieve and catch fish at different times of the year when they’re more or less active.

Topwater lures such as poppers are another popular choice as they will stay on the surface of the water and produce the telltale splash and bubbling movement that many saltwater fish are looking for along the beach.

Surf fishing with light tackle does have some similarities that you will find coincide with what you’d do with heavier tackle.

Fishing is still best during the low-light hours of dawn and dusk and can even be more productive for light tackle anglers as the lures you can use give you a bigger advantage.

Using a popper or jerkbait early in the morning is an excellent way of attracting the bite of a hungry mackerel or red drum.

Fishing during the early morning or late at night usually means that you won’t have to contend with beach-goers who want to play and swim in the water. Having the whole beach to yourself is the best way to determine which spot is the most ideal location.

Once you’ve decided on the best spot for fishing along a particular stretch of beach, you can go and get set up early in the morning and start fishing before anyone is able to move into the location.

Surf fishing with light tackle is something that anglers of all ages and skill levels can enjoy. It’s much easier to learn and get the hang of since you’re not having to deal with overly-large or heavy gear and equipment.

Using light tackle is also the best way to get young anglers acquainted with surf fishing. By using the tips and information we’ve outlined in this article, you should have the knowledge you need to get started fishing at your favorite beach using light tackle strategies.