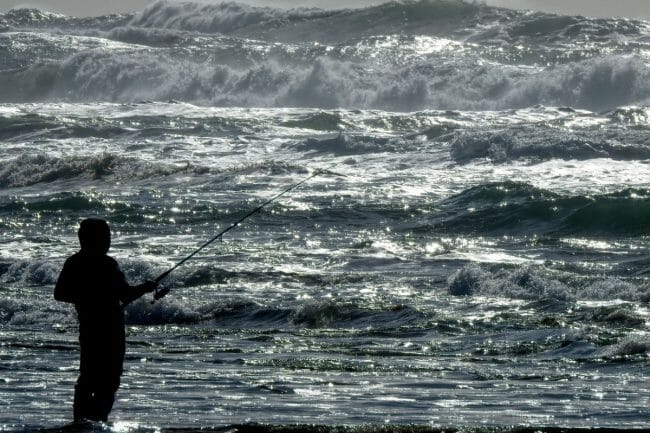 Surf fishing is nothing like any other form of angling. It requires the use of gear and tackle that are very different from fishing in lakes and rivers, and even tackle that’s unlike what you might use when fishing many miles offshore.

Fishing in the crashing waves creates an environment that makes small bait fish and other creatures disoriented and sometimes confused, making it easier for larger predatory fish to take advantage and make an easy meal out of them.

Most anglers know what bait will work for fishing offshore or even along the inlets and channels near the beach, but understanding what type of baits are best for fishing in the surf can be a bit confusing.

There are a number of other variables that come into play when you’re surf fishing, but nothing you do will be productive if you’re using the wrong type of bait.

In this article, we will lay out some of the best surf fishing baits for most species of saltwater game fish that are usually caught along most beaches, as well as how to use each type of bait to heighten your chances of catching fish in the surf along your favorite shoreline.

Almost any type of fish that can be found prowling the waters along most shorelines will feed one shrimp if they have the opportunity to. In fact, some of the more popular types of saltwater species that are usually caught in the surf prefer shrimp over almost any other type of bait you could possibly use.

They are known to be hard to keep on the hook at times, but shrimp are the perfect type of bait for beginners and novice anglers who are just getting started in surf fishing.

One of the major advantages of using shrimp is that you can catch a huge variety of fish on them. You’ll also likely not have any trouble finding shrimp at your local bait shop or other places that sell bait because they are one of the most readily-available types of bait when it comes to saltwater fishing.

You can purchase them frozen or live, depending on what type of fish you’re going after throughout the year.

Fresh shrimp are much better than frozen shrimp when it comes to surf fishing because the fish that do feed on these small sea creatures will be attracted to the look and smell of the live shrimp in the water.

There are a wide variety of different ways you can rig shrimp and virtually any sort of surf fishing rig will be productive when using shrimp as your bait.

Our second choice is one that most anglers might not select based on the simple fact that they don’t look like what you might typically use to catch saltwater fish.

Most beginner anglers might view this type of bait with suspicion, but they are actually very capable of catching a huge variety of fish in the surf. One of the main advantages of using Fish Bites is their ability to stay on the hook no matter how rough the seas might get.

Fish Bites can be found at virtually any bait shop or online retailer and come in a large variety of different colors. Some colors are better suited for certain species at specific times of the year, but colors like pink and orange are considered a great choice for year-round fishing for fish in the surf.

You can also use Fish Bites with other types of bait on the same hook. Some anglers will use fish bites as a trailer behind other types of saltwater fishing baits.

You won’t have to worry about keeping them alive, or dealing with bloody, slimy cuts of flesh or other types of creatures, which is another major reason why so many beginners should try this type of bait first before moving on to more complicated options.

As for the rigging of Fish Bites, there really is no wrong way to fish with these small slivers of rubbery material.

Some anglers might cut them into small strips or squares if they’re fishing for smaller species while others often use two of the normal Fish Bites strips on their hooks to attract larger fish to bite. Fish Bites are an excellent choice for species like redfish, pompano, and many others in the surf.

One of the most prevalent types of bait that avid surf anglers will use is sand fleas. These small crab-like creatures are somewhat of a mystery to novice anglers as they can be difficult to find or catch, as well as tough to place on a hook.

However, if you follow certain instructions related to using sand fleas, you’ll be certain to have great success in catching almost any type of saltwater fish species.

These small creatures are what you normally see quickly burrowing down into the sand when the waves recede along the beach. If you’re fast enough and have a solid small net, you can often dig down quickly and catch these critters before they burrow down too far.

Live sand fleas are without a doubt one of the top baits you can possibly use, but they are incredibly difficult for new anglers to find and catch.

You can also find sand fleas at most bait shops near areas where surf fishing is popular. Fish that swim along the shoreline and come close to the waterline are usually hunting for sand fleas, so fishing with them will be a major advantage over other anglers who might be using different baits.

You can expect to catch pompano, redfish, whiting, and other fish with these small, but unique creatures.

They can be hard to hook if you’re unfamiliar with them, but you can’t go wrong by boring the hook down through the shell on either the head or the tail end of the sand flea. Once hooked, they will usually remain on the hook better than most other types of surf fishing bait.

One of the only downsides to using cut bait is that they won’t always stay on the hook very well. Avid surf anglers will often salt their cut bait down the day before their fishing trip in an effort to tighten up the skin and meat, which makes them stay on the hook longer.

One of the best types of cut bait are mullet and herring, as well as a variety of other species of small fish. You can fish cut bait in sections that are as large as you want. Using a larger piece of cut bait will obviously be better for catching bigger saltwater species in the surf.

When you’re buying cut bait or using your own catch to cut into strips, be sure that the meat isn’t too soft or it will fall off the hook too easily and be very difficult to cast.

Cut bait is a great choice if you’re looking to catch mackerel, striped bass, black and red drum, snook, and other species.

Another popular choice of bait that is slightly less popular than the ones we’ve mentioned already is squid.

These small creatures are excellent choices of bait for beginners as their flesh is very tough and you’ll have no problem keeping them on the hook as you cast your rig out into the waves.

You will get ink and slime on your hands, so be ready to carry a rag with you or other materials to keep your hands clean so you don’t get your rod and reel too messy.

You can cut squid into small strips if you plan to target smaller species of fish, or use larger squid and bigger hooks to go after sharks and other big predators that come close to the shoreline.

There are a wide variety of different ways you can rig squid, but some of the most productive methods involve rigging that will keep your bait off the bottom and up where fish can see if more easily.