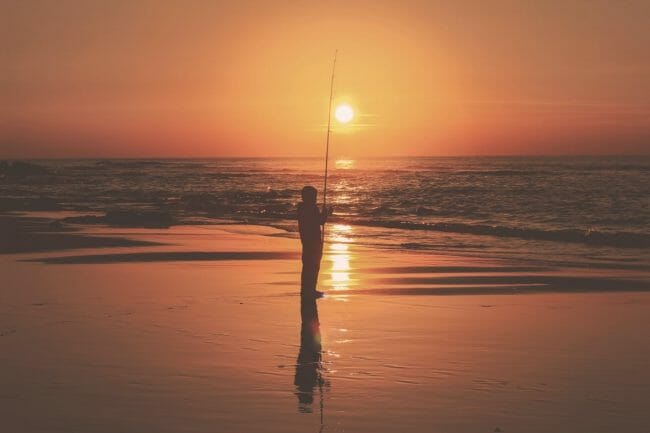 Redfish are one of the most popular game fish species along the southern Atlantic and Gulf coast. Many anglers consider them to be among the most exciting fish to catch due to their massive size and aggressive feeding habits at certain times of the year.

Avid anglers will agree that there’s nothing quite like catching bull reds on a topwater plug or other lure during the warmer months when they venture into shallow waters.

Redfish are known by a variety of different nicknames such as red drum, reds, channel bass, spot tails, and many other names depending on the region you’re fishing in.

For much of the coastline along the southeastern United States, redfish can be caught year round in the surf at almost any beach.

Fishing for reds from a boat is a huge advantage as you’ll be able to maneuver back into the inlets and flats where they will congregate in large schools.

However, if you don’t have the luxury of fishing from a boat, you can still have success surf fishing for redfish by using the right approach and the proper rigs.

In this article, we’ll cover the most important tips you’ll need to know when it comes to catching reds in the surf at your favorite beach.

Best Time to Catch Redfish in the Surf

If you’re already familiar with surf fishing, you probably know that it can be quite different from catching fish in the calm, shallow inlets. Redfish will usually venture closer to shore as the weather warms during the early spring.

Having success catching big redfish in the surf comes down to using the right approach and being at the right location at the right time.

Redfish are a migratory species that will move to a new location throughout the year depending on the water temperature. Most of the time, redfish will gravitate toward areas where the water is at least 65 degrees and typically no warmer than about 90 degrees in the midsummer months.

When the water temperature begins to drop, you can expect the redfish to move out of a certain area in search of more comfortable habitat.

In the spring, redfish will begin moving out of the deep water where they’ve been throughout much of the winter months.

As they slowly make their way toward the shoreline of most beaches around the southeast, they will usually stick very close to some type of underwater structure such as reefs, shipwrecks, rocks or other objects.

Grass will begin to spring up in some areas when the water temperature heats up, which creates the ideal spot for redfish to move into. These fish love hiding in tall grass as it allows them to easily blend in and ambush any potential prey at the same time.

Redfish will feed more aggressively during the spring, but the bite will typically slow down when the heat reaches 90 degrees around the month of July.

Once the heat sets in during the summer, redfish will become a bit less active. They will spend most of the day taking cover in or around structures where they can find shade.

They will become much more active in the early morning or just before dark since they will be able to avoid the blazing sun and extreme temperatures.

The fall is when redfish will begin their annual spawning routine. This is widely considered to be the best time of year to target redfish as they will usually feed voraciously on anything they can attack. Reds will venture deeper into inlets and other inshore areas where they will prepare to lay their eggs.

The best time to catch redfish in the surf is anytime from late spring to early fall when they will be roaming the coastline looking for their next meal.

In late fall, when the spawn finally cranks up, you probably won’t have much luck catching redfish from the surf unless it’s a lone bull red making its way back out to the deeper water offshore.

Best Locations for Redfish in the Surf

Like any other stretch of water, you’ll need to be able to properly read the surf in order to determine the best spots where redfish might congregate or pass through.

Since there is rarely any cover for redfish in the surf, you’re more likely to have success in the early morning or late evening when the sun isn’t beaming down on the water.

Avid redfish anglers also know that an overcast day will usually bring cooler temperatures, which can be an outstanding time to catch redfish in the surf.

Redfish will generally prefer waters that are more rough and have harder tow than usual because it’s easier for them to chase down baitfish that can get disoriented by the strong waves and current.

This means that you shouldn’t always assume that the fishing might not be that great when the surf is very high. In fact, the opposite is usually true on most beaches around the southern United States around the Atlantic and the Gulf of Mexico.

You’ll want to look for areas where the waves break unevenly along the surf, or where there’s a dark spot in the water. This typically indicates some sort of depth change, which usually draws redfish in where they will set up to ambush small, unsuspecting bait fish as they swim by.

You’ll usually have better luck at times when the tides are shifting since redfish will use this time to take advantage of an easy meal.

If you can find any sort of structure along the beach, you can usually bet that there are redfish holding close to it throughout the day and this will be the best possible area to fish.

Redfish won’t venture very far away from ledges and structure along the beach, so you’ll want to cast your rig as close as possible to any type of structure that you deem to be a good spot for reds to congregate. If there is no structure, you can expect redfish to be actively feeding in the surf just off the shoreline.

You don’t have to cast the rig out to a considerable distance to have the best chance at catching redfish. In fact, most avid redfish anglers who commonly fish in the surf say that reds will sometimes be about 20 feet off the shoreline at any given time as they hunt in the surf.

For surf fishing, you’ll want to use a pyramid sinker since these will usually do a better job of holding your line in place, no matter how strong the surf gets. Simply attach the pyramid sinker to a snap swivel that you then attach to your main line and you’re ready to hook your bait on the line.

You’ll want to have a heavy barrel swivel tied to the main line that is connected to a heavy leader line using a crimp.

Finally, you’ll want to use a circle hook that’s either 8/0 or 12/0 in size. Anything smaller won’t be able to hook the redfish’s mouth and larger hooks will usually be too big for most redfish to fit in their mouth. The best possible bait you can use is typically cut bait.

According to most avid surf anglers who regularly target redfish, your best bet is to go with porgies, mullet, pinfish, or some other type of small bait fish that redfish will be looking for in the surf. Using these types of bait will appeal to the fish’s sense of smell and they will often work to track down the bait in the surf.

Once you pick your spot for surf fishing for reds, you’ll want to spread your surf fishing rods out about every 20 feet or so, depending on how well you’re able to keep them monitored. Be sure to have the rod holders firmly in the sand as a monster bull red can easily pull the rod holder free and take off with your rod and reel.

Most small to medium-sized reds will run their prey up into the beach to eat them, which means you might see your line moving toward the beach if you have a bite. If this happens, simply wind the slack line up onto the reel and put pressure on the hook to make sure you don’t lose the fish.

Redfish can be one of the most exciting species to catch in the surf. If you stick to these tips and have a good amount of patience, you should be able to land a decent amount of redfish in the early morning, or late evening hours.

Be ready for any size redfish as the big trophy-sized reds will usually be prowling the surf during the early morning hours shortly after sunrise.