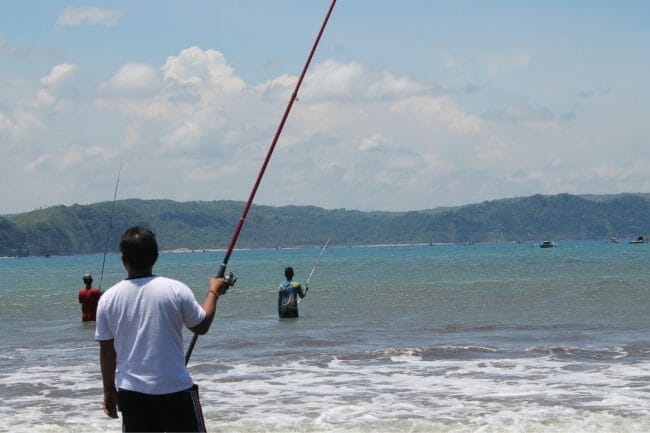 The success of any surf fishing trip is almost always decided by the state of the tide at the particular time when you are fishing.

Regardless of the bait, tackle or tactics you use, it can be rendered ineffective if the tide is not at a suitable level or is shifting in a way that fish don’t like.

The most experienced surf anglers know that most of the different game fish species rely on the changing levels of the surf or its intensity to give them the chance to ambush certain prey.

According to most surf fishing anglers, high tide is usually considered to be the best for just about any species as they will use the heightened water level to devour sand fleas and many other types of small bait fish that are caught unaware by predators.

By waiting on this tide, you’ll greatly increase your chances of success when fishing for virtually any saltwater game fish species.

In this article, we will take a closer look at the best tide for surf fishing and help explain why certain times of the day or even the seasons out of the year can have quite a bit of bearing on whether you will successfully catch the fish you’re after.

The key to grasping just when you’ll need to time your next surf fishing trip depends on a number of factors that you should pay close attention to. The tide shifts four times per day across the span of the Earth.

This shift is caused by the sun and moon, but is actually stronger when the moon is near due to the fact that the moon is much closer and its gravitational pull affects the water’s of the oceans to a slight degree that makes the tides rise and fall.

The tide will be low on both sides of the Earth that are farther away from the moon. The moon will actually pull on the Earth’s gravitational field to such a degree that the shape of this pull appears much like an oval surrounding the Earth with the longest end pointing straight towards the moon.

This basically means that at any given time, there are actually two high tides on the Earth: one that is closest to the moon and one that is on the opposite side of the world. Knowing which tide is going to be affecting your region at specific times will help you understand when the tide will be higher or lower due to the movement of the sun and moon.

Using the Tide in Surf Fishing

Some saltwater fish species will sit back and wait on the low tide to force small bait fish into shallow pockets where they can corner fish while other species might utilize the rising tide to capitalize on the element of surprise and ambush their prey while they are disoriented. In either case, the tide always plays a large role in fish behavior.

Also Read: Where to Cast When Surf Fishing

You might not be able to have great success during low tide in some parts of the world, but you can use this time to get a better understanding of what the beach bottom looks like underwater.

The low tide will usually expose some types of structure that are prone to holding fish when the tide is rising. If you take the time to study these structures and depth changes during low tide, you’ll be able to make better use of the high tide.

Is High Tide the Best?

The main question we want to address is whether the high tide is the absolute best time to catch fish in your given area. The answer to that truly depends on the type of fish you’re going after.

There are some species that will use the shifting tides to chase different bait fish and other creatures down and eat them during the changing tides. Most fish that do this will typically be on the bottom of any outgoing tides or the first portion of the incoming tides since these waters will be the most likely spot where small bait fish and other prey will get caught up.

Some fish species will wait until the tides are shifting and prowl along the edge of the rising tide, ambushing various types of aquatic creatures as the water continuously rises until it reaches its high point. Some species that are known for doing this include pompano, croakers, and others that will run bait fish all the way up to dry land in an effort to chase them down.

If you’ve studied the area you’re fishing in thoroughly during low tide, you should be very well acquainted with certain spots that have deep holes, ledges, structure, humps, or really any kind of depth changes that might give you an edge when it comes to specific types of fish.

You can mark these spots on a map, or simply make a mental note of them and return when the tide is rolling in to take advantage of these areas where large predatory fish might frequent.

Understanding what type of creature your target fish will want to hunt will help you in planning when and where you’ll fish. If you’re targeting pompano that are eagerly swimming up into the brim of the high tide trying to devour sand fleas and small crabs, you can anticipate when and where they will be, as well as using the same type of bait that they are looking for in the surf.

In many cases, anglers who target pompano or croaker that are working into the rising tide will use small crab lures or even live crabs to catch these fish.

The Best Tide for Surf Fishing

If you’re wondering when the absolute best tide for surf fishing occurs, you can usually answer that question by looking for when the high tide will be coinciding with the times of dawn or dusk.

As any good surf fishing angler who’s worth his salt knows, fishing is always better at dawn and dusk because the fish will be using the limited amount of daylight to target their prey, as well as the tide.

If you’re able to time it just right, you can sometimes catch the high tide moving in right at dusk or just as the sun is setting in a certain area. This is undoubtedly the best time that you’ll have to catch most types of fish.

This high influx of water can cause the perfect conditions for anglers who are willing to get up early and brave the chilly temperatures to target these fish along the beach as the tide is shifting.

Various types of fish species often rely on the changing tides to help them hunt down their prey and find their next meal. Without it, hunting would be much more difficult and they would have a much tougher time trying to survive.

Planning to Fish the High Tide

As we’ve noted, you’ll have increased success by fishing during high tide. This means that you’ll actually need to be on the beach fishing when the water starts moving in and also when it’s moving back out toward the sea.

If the high tide is predicted to be 6 a.m., you should start fishing at least by 5 a.m. or earlier and plan on fishing for a few hours in order to thoroughly fish through the rising of the tide.

When it comes to finding the best tides to fish in the surf, planning is key. By using the low tide to get a good grasp on what type of structure will be submerged during high tide, you can plan accordingly and maximize your efforts.

Pay special attention to charts and other data that might indicate when your area will be experiencing the first high tide, which is the highest, or the second high tide.

The best way to learn how the tides affect your fishing is to practice and take into consideration the lessons you learn as you fish the high or low tides. Doing this will make you a better angler and help increase your catch rate quite a bit.