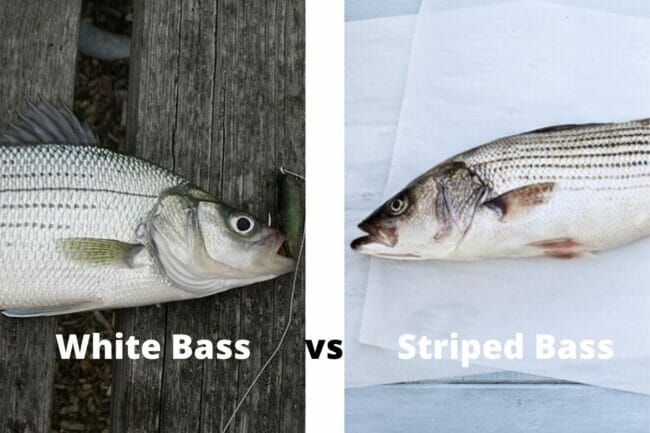 It’s sometimes hard to tell the difference in white bass vs striped bass. For most anglers, these fish appear to be largely the same and there are few distinguishing qualities that make it easy to determine which one is a striped bass and which is a white bass.

They are found in the same freshwater areas and feed on the same types of prey to survive in many cases.

While striped bass are known to grow to massive sizes, white bass are capable of growing to only a fraction of the size that a large, mature striped bass can reach.

If you’re fishing in waters where you’re likely to catch either species, it’s important to know the differences in each type of fish to make sure you don’t harvest one that might be out of season.

To help tell these two species apart from one another, we’ve laid out the main differences between white bass vs striped bass in this article.

What is a White Bass?

White bass are native to the eastern and mid-western United States and are found mostly in lakes and other waterways that are connected to the Mississippi River system.

They are commonly referred to as white bass, silver bass, or even sand bass in some cases where they are found in large river systems.

They have a distinct silver coloration that sets them apart from their distant cousins, the largemouth and smallmouth bass, and they can sometimes appear to have a greenish hue to their overall coloring.

Their backs are typically black in color, but their sides features horizontal black stripes, which make them appear very similar to striped bass.

While these fish might look similar to striped bass, they don’t grow nearly as large. In many cases, white bass will grow to about 10 or 12 inches in length and reach a weight of about 1 or 2 pounds at full maturity.

If you catch a white bass in any freshwater location, there are likely dozens more in the same area since these fish live and swim in large schools. They will swarm small bait fish or even pick off the occasional crawfish or small insects that can be found in freshwater rivers and lakes.

They will spend most of their time throughout the year in rivers, but will venture into large lakes and reservoirs during the spawning season, which typically happens in the spring of each year.

What is a Striped Bass?

Striped bass are one of the most popular game fish species in the world for many reasons. They are one of the few fish that are capable of surviving in fresh or saltwater environments and are known to grow to massive sizes that are well over 50 pounds in lakes, rivers, and coastal areas throughout the United States.

Striped bass are also known as linesides, stripers, rockfish, or any other nicknames that locals sometimes bestow upon them in certain regions throughout the country.

Striped bass are the largest species in the bass family that are considered temperate bass and they are a world-famous sportfish that is targeted by anglers in coastal waters, as well as rivers and lakes.

These fish can grow to immense sizes and it’s not uncommon for anglers that fish in large reservoirs that are connected to river systems and the ocean to land stripers that are up to 70 pounds.

The world record striped bass caught in 2011 on a rod and reel was an 81-pound giant that was landed in the coastal waters off of Connecticut, but a commercial fishing vessel netted a 125-pound behemoth off the coast of North Carolina in 1981.

Striped bass live most of their lives in saltwater coastal regions and will venture up into river systems to spawn, sometimes more than once in a year.

There are many locations where dams have blocked the passageways on rivers that striped bass once used and these fish are forced to live their entire lives in freshwater.

These freshwater-only striped bass are also able to grow to the huge sizes that saltwater variations can and are a popular target among anglers throughout the eastern and midwestern United States.

They are known to have a voracious appetite that can sometimes decimate other fish species populations in certain lakes and reservoirs. Striped bass are opportunistic feeders that will eat virtually anything they can catch in their mouths.

In freshwater lakes, they have been witnessed eating anything from frogs and fish up to 12 inches in length or more, as well as hatch-ling ducks and birds when given the chance.

The Difference Between White Bass and Striped Bass

There are some obvious differences between striped bass and white bass if you are an avid angler and know what to look for in either species. These differences are often subtle, but it’s important to be able to recognize them if you’re planning to go after one of these fish species in particular.

White bass are relatively small compared to striped bass and typically grow to about 12 inches in most areas. They have a silvery coloration that can sometimes appear to have a greenish tint, especially when they are underwater in freshwater lakes and rivers. White bass have black stripes that run along their sides and their overall coloring appears to have more of a shine than striped bass.

The scales of white bass are described as being rough to the touch and their scales are larger than most of the other freshwater fish species you might find in the same waters.

Like striped bass, white bass have two dorsal fins that are very similar in shape and positioning on their bodies.

White bass’ bodies are much more rounded and have more girth in relation to the fish’s overall length compared to striped bass, which have a more elongated body shape. They have a head that is more sharply-tapered toward their nose and their mouths are much smaller than a striped bass.

These fish have a patch of teeth that are raised and feel much like sandpaper to the touch, but there is only one patch in the mouth of a white bass whereas a striped bass will have more than one of these patches.

Striped bass have a distinct appearance that sets them apart from almost all other freshwater and saltwater fish in most cases. Their sheer size is an indicator of their voracious appetite and striped bass are capable of growing to be up to 6 feet in length and weigh well over 50 pounds.

Aside from the fact that their bodies are shaped differently, striped bass also have the trademarked black stripes along the sides of their bodies that run horizontally.

These stripes will be much more defined on a striped bass and will stand out when you look at them both underwater and on the surface. The white bass’ stripes are more faint and can also appear to be more jagged instead of a long, linear stripe.

Striped bass will also have two dorsal fins in the same way a white bass does, but the front dorsal fin of a striper is pointed upward, away from the fish’s body while the white bass’ dorsal fin is pointed slightly backward towards its tail.

The fins and tail of the striped bass will be lighter in color compared to a white bass and will sometimes appear to have a slightly greenish coloration.

Are white bass good to eat?

White bass have meat that can be closely compared to that of a largemouth bass in both texture and taste. Their meat is often described as having more of a ‘fishy’ taste than other freshwater species that are commonly targeted for table fare, such as crappie, bluegill or perch.

Their filets can be grilled, but most anglers who do eat these fish will fry them in a batter that produces a crispy, flavorful outer layer. They can sometimes be very enjoyable when fried at the right level, but cooking them most other ways will only result in a somewhat bland, fishy tasting meal that is not desirable.

Are striped bass good to eat?

Striped bass have meat that is described as tasting very similar to that of white bass in many cases. Their meat has the same type of texture in smaller striped bass, but the meat of larger striped bass is often too oily and soft to be easily cooked through frying or on a grill.

Some anglers do harvest and cook smaller striped bass in the same type of frying method you might use for white bass. The taste of striped bass is described as being a bit more flavorful and less ‘fishy’ than white bass and is also known to be more flaky and less firm as well. Striped bass that are caught in the ocean will often have a slightly salty taste in some instances.