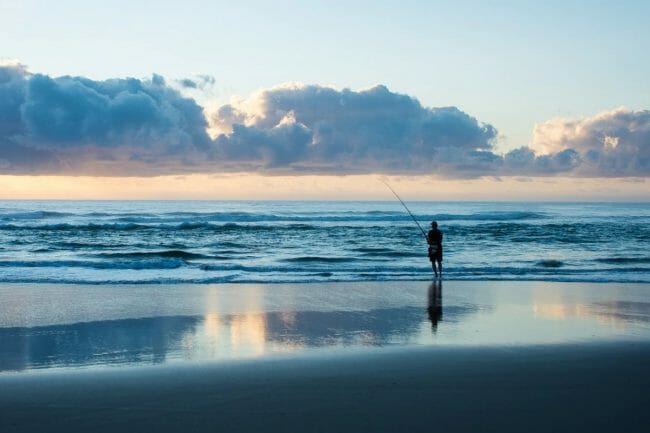 Striped bass are one of the most popular game fish species found along coastal saltwater areas throughout the United States.

They’re capable of living in both saltwater and freshwater environments and can be caught everywhere from rivers and large reservoirs to coastal waters.

Anglers consider striped bass to be among the most prized and sought-after types of game fish as they are capable of growing to massive sizes of more than 60 pounds in many cases.

Striped bass are typically caught by anglers who have specially outfitted boats with heavy tackle and the latest sonar equipment to track down these giants.

However, it’s not absolutely necessary to have a fishing vessel to have a shot at catching a trophy striped bass. In fact, many anglers have done quite well fishing for striped bass in the surf at their local beach.

There are certain areas of advice that surf fishing anglers should follow in order to have a good chance at hooking a striped bass and we will cover some of the most important points in this article.

Striped bass are among the biggest species of fish that are capable of surviving in both freshwater lakes and rivers, as well as saltwater waters.

For this reason, striped bass have become highly popular with anglers all over the world as they can be targeted at various times of the year when they are chasing different types of bait fish species.

Many anglers commonly refer to striped bass as ‘stripers’ and one of the main identification factors these fish have are the long black stripes that typically run the length of their bodies.

It’s not uncommon for striped bass to grow to more than 60 pounds and some anglers have even landed behemoth stripers that weigh in excess of 100 pounds.

Striped bass are found prominently along the east and west coast states in freshwater rivers and lakes, but can also be caught along coastal areas around the United States and Canada.

Some of the most prominent times of the year for striper fishing are during the spring when these giant fish are known to begin their annual spawning routine, as well as some of the different shad and herring ‘runs’ that take place in North American freshwater rivers and reservoirs.

The Basics of Surf Fishing for Striped Bass

Fishing in the surf is an excellent way to catch a wide variety of different types of game fish species that range from small pompano to full-grown sharks and everything in between.

Different areas of the beach are usually more productive for a variety of factors, but anglers who regularly fish in the surf at a particular beach can often pinpoint some of the best locations.

Contrary to popular belief, surf fishing doesn’t actually involve fishing in the crashing waves and strong tidal pulls of the surf itself. Rather, surf anglers commonly throw their lures out well past the surf and into the calmer waters beyond the breaking waves.

This concept applies for anyone who plans to utilize surf fishing as a means to target striped bass as this species will almost certainly avoid the chaos of the breaking waves and stick to the shallows just beyond the surf in coastal areas.

Surf fishing involves using a long, heavy rod that will allow anglers to throw their bait and lures out as far as possible.

When it comes to surf fishing for striped bass, as well as any other species. The farther you can throw the bait out past the waves, the better your chances of catching fish will be.

It’s also very important to use the right type of tackle and equipment, as well as the right kind of rod holder since a bite from a large striped bass can easily pull the rod into the water if it is not properly secured.

There really isn’t a certain time of year that is considered to be poor timing when it comes to surf fishing for stripers. Anglers who have closely studied and researched the striped bass species will know that these fish begin their annual spawning ritual during the spring months like so many other fish in North America.

During the spring of each year, anglers can expect to have a slight advantage when it comes to catching some of the biggest striped bass that typically won’t bite throughout the other months of the year.

During the spawn, stripers will swim very close to the shoreline where they will sometimes form schools. As these schools of striper grow in number, they can be caught with relative ease using just about any type of lure, especially those that resemble a small bait fish.

This is likely the best time to go surf fishing for stripers and anglers can catch monster striped bass in rapid succession simply by being at the right place and time.

Another very productive time of year for surf fishing for striped bass is during the fall season when stripers will chase after various species of bait fish during the many different ‘runs’ up and down the rivers and lakes of North America.

One of the most popular targets of striped bass are any variation of shad species as these bait fish make up the bulk of the striped bass’ diet throughout the year.

For anglers who are curious about the specific time of day when striped bass can be caught more easily than other times, the same logic that’s used with other species of fish applies to striped bass.

Typically, the early morning and late evening hours are going to be the most productive times of day for surf fishing for striped bass. During these times, stripers will take advantage of low light conditions and ambush their prey.

Striped bass are opportunistic feeders and will typically utilize any type of drop off or ledge to their advantage when it comes to hunting for small bait fish.

They are known to hang out on the lower side of these ledges and wait on unsuspecting bait fish to pass by before striking at them with impressive quickness.

When the weather heats up during the summer months, striped bass will shy away from the warmer shallow waters and can usually be found in deeper areas of any coastal area.

This usually means that your chances of catching a striped bass during the middle of summer will be the lowest when fishing in the surf.

Look for sandbars and troughs around the beach area where you plan to fish in order to identify prime locations where striped bass might be lurking in search of their next meal.

Surf fishing for stripers involves using the same type of baits that you might utilize for other species. These often include cut herring, shad, bunker, shrimp, eel, and many other naturally-occurring prey.

Be sure to hook these baits with a large, strong hook that won’t easily bend as striped bass have been known to straighten many hooks that are simply too weak to stand up to their incredible strength.

Utilizing a heavy type of fishing line, as well as a large sinker are also key points to remember when it comes to surf fishing for stripers as you never want to risk being outmatched against a large trophy striped bass that might break your line and your heart.