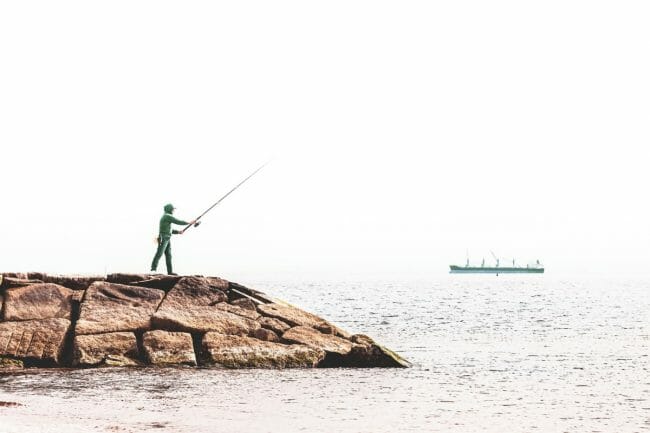 Striped bass are one of the most popular fish in the world due to their potential to grow to enormous sizes, as well as the fact that they can be caught in fresh or saltwater.

Various wildlife programs throughout the United States engage in regular stocking of striped bass in some of the country’s most prominent lakes and rivers, which also adds to the overall appeal from sportfishing anglers who are looking to tangle with these giants.

Most anglers will target striped bass from a boat as these behemoth fish require a special amount of heavy tackle and significant planning and preparation to catch a bonafide trophy striper.

However, in this article, we will discuss some of the ways that anglers can target these types of fish from the shoreline and enjoy a moderate level of success despite the fact that they are typically limited to only being able to fish a fraction of the water that anglers can fish from a boat.

Let’s take a closer look at some of the ways you can target striped bass and how to maximize your chances of successfully catching them from the shoreline of your favorite local lake, river, or coastal saltwater area.

Striped bass are mostly considered a saltwater fish as they are commonly caught along the coastal areas of the United States. For certain portions of the country, striped bass can be caught in greater numbers when these types of fish flock to certain areas to take advantage of various ‘runs’ of specific types of bait fish.

Along the eastern coast of the United States, striped bass can be caught during the spring months as they are typically found chasing after large schools of bait fish like shad and herring.

These runs will often include the striped bass going far up into the reaches of rivers that delve deep into the interior of the continental United States, especially around the southeastern portion.

Anglers can have incredible success when targeting striped bass during the early or even late spring months if they know what areas to focus their efforts on.

Even fishing from the shoreline for striped bass can be highly productive for those who know where to look and just what type of lures and baits to use.

How to Catch Striped Bass from the Shore

It’s highly important that anglers do their research when it comes to fishing and catching striped bass from the shore, regardless of whether they are fishing in saltwater or freshwater bodies of water.

If you are relatively familiar with the shad and herring runs that come through certain areas of a lake or river, it can be quite simple to narrow down the best places to set up along the shoreline and try your luck at catching striped bass.

There are a few major points that you need to take into consideration when planning to target striped bass from the shore. The first of which is using the right kind of tackle.

When it comes to fishing for striped bass (even from the shore) it is highly important that an angler be prepared to hook into a large-sized striped bass, even if they don’t expect to catch one that’s of significant size.

Striped bass can grow to be well over 50 pounds in many cases, which is large enough to render most moderate and medium-sized rods and reels virtually useless should you ever encounter one of this size.

These fish are known to pull especially hard against the angler’s rod, especially at the onset of being hooked.

There are many cases of anglers who have managed to hook a large striped bass, but were woefully unprepared to go toe-to-toe with a trophy-sized striper.

When this happens, it is not uncommon for a large striped bass to strip the drag off a reel, or even snap a light action rod like a twig.

With these facts in mind, it’s highly important that anglers use heavy tackle when fishing for striped bass and be prepared to hook into a monster-sized fish at any time.

Look for the Right Spot

As with any other type of fish, it’s highly important that you find the ideal spot for fishing along the shore for striped bass. This can be tough as these fish are commonly found cruising through open water in search of large schools of bait fish.

However, it is not uncommon for striped bass to pass relatively close enough to the shore for a well-equipped angler to have a shot at catching them.

Whether you’re fishing from freshwater or saltwater shoreline areas, the most important thing you want to look for is any type of drop off or ledge-type of structure.

These can be prevalent in rivers, lakes, or even along coastal shorelines and anglers who are seasoned striped bass fishing enthusiasts are well-aware of the fact that striped bass will lie in wait on the other side of a ledge or drop-off and attack any bait fish that travel over it.

When it comes to fishing in freshwater, rivers are widely considered to be the best option for catching striped bass from the shore.

Striped bass are known to prowl up and down rivers in search of easy meals that range from small bait fish to moderate-sized fish like trout and even bass.

For anglers who plan to fish along the shoreline of rivers, it is important to note the rate at which the water is moving.

Striped bass can be found in rivers that contain slow-moving water, as well as relatively fast-moving water as these fish are very strong swimmers and can easily chase down their prey in this type of environment.

If you’re planning to fish in a river with stronger current, be sure to have a heavy enough weight to keep your lure or bait firmly in place to avoid having it swept downstream.

Most serious anglers who regularly target striped bass in rivers recommend using a striper rod that’s at least 8 feet long and a larger-sized reel that’s at least a 5000 size as this will allow you to make longer casts and get farther out away from the shoreline and out toward the middle of the river where the striped bass are likely to be.

When it comes to catching striped bass from the shore, some of the best baits and lures are going to be relatively the same type that you’d use while fishing from a boat.

Any type of swimbait lure that closely resembles a shad is going to be the best option when fishing for striped bass from the shore.

Many anglers also have good amounts of success in using lipless crankbaits and medium-diving crankbaits that can be thrown out a considerable distance from the shore.

The most important key to remember when it comes to fishing for striped bass from the shore is to match your bait and lure to the exact presentation of the specific type of bait fish that the striped bass are going after in your particular body of water.

If you do this well, you’ll have no problem catching plenty of striped bass during these prolific ‘runs’ where they will voraciously chase after bait fish.