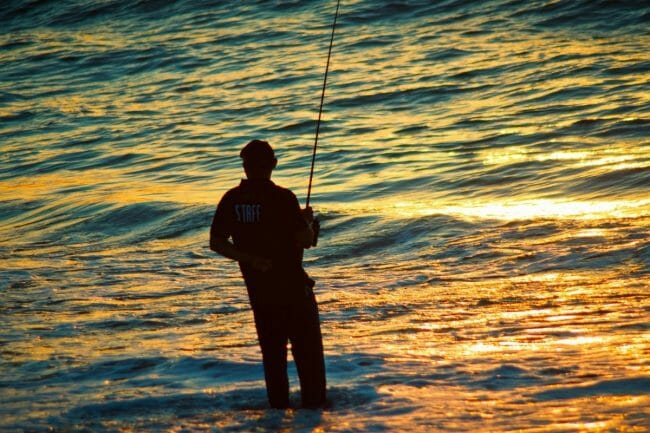 Striper are known throughout the world of fishing as some of the most voracious feeders in the oceans, rivers and lakes.

They engulf huge numbers of almost any kind of bait fish or other creatures that come within striking distance and will usually eat significant amounts of food each day to grow to the enormous size that they are known to reach.

When it comes to narrowing down their selections to the top choices, it can be tough for most anglers to pick just one single bait that’s better than others.

There are plenty of striper fishing enthusiasts who have their own personal preference, but if you asked each angler to compile a list of their top 5 baits for striped bass, the odds are good that you’d get the same basic answers from each one.

In this article, we’ll take a closer look at some baits for striped bass and discuss when, where and how each one should be used in order to maximize your chances of catching one of these giants.

Perhaps the most popular choice of bait among anglers who target striped bass is the shad. These small bait fish will gather in small or even very large schools and travel together in order to find safety in numbers.

The fact that they run together in these schools might not be the most protective strategy when it comes to striped bass as they are known to follow these schools and pick off stragglers or go directly into the school to devour mouthfuls of shad in one single bite.

Schools of shad are the main reason why so many striped bass travel many miles up rivers and into large lakes during the spring of each year.

As they prepare for their annual spawn, they will seek to devour as much prey as possible in the few short weeks leading up to their spawning ritual as they might go days or longer without eating while spawning.

Shad can be purchased at most bait shops near lakes and rivers that are known for having large numbers of striped bass.

Rigging a shad so that it can swim around a few feet below the water’s surface is often an excellent strategy for targeting hungry stripers during the spring and early summer months.

Most skilled striper anglers advocate for keeping shad as lively as possible right up until you’re placing the hook in them as striped bass are said to prefer these types of bait live instead of dead.

In some areas throughout North America, bloodworms are widely considered to be the top bait during the winter months when stripers are very deep and can be found near the bottom of most waterways.

Bloodworms are an exceptionally popular choice of bait in the northern portion of the United States, as well as along the coastal regions on the East Coast. They are highly effective in attracting strikes from stripers when no other baits seem to work.

Many anglers are shocked to find that bloodworms are very expensive compared to other types of bait and even other worms. In some areas, a large bloodworm might sell for as much as one dollar per worm.

For anglers who are truly dedicated to catching monster stripers, investing in a large amount of these bloodworms is a strategy that will eventually pay off.

In most cases, using bloodworms presents a few challenges that you don’t normally deal with when it comes to striper baits. They are small, which means bloodworms are likely to be picked off by fish that you’re not intending to catch.

This is something that is simply part of the process of striper fishing and most anglers will attest to having to unhook dozens of smaller fish to catch one decent-sized striped bass.

When it comes to fishing in saltwater areas for striped bass, there are certain types of baits that are considered better than others.

Crabs are among the most popular choices of bait for saltwater stripers as they are very effective in weeding out other types of smaller fish that anglers don’t want to deal with.

In fact, you might catch any assortment of the most popular kinds of sportfish that live along coastal areas when using crabs, but it’s unlikely that you’ll have smaller fish steal your bait in the same way they are capable of picking off worms.

Stripers are known to go after hard shell crabs when they are hungry enough, but their favorite choice of crab are those which have a softer shell or even a soft underbelly beneath their hard top shell portion.

Striped bass are known to cruise many miles along coastal areas in search of crabs lingering in the sand.

There are certain advantages to using hard shell crabs like the fact that it’s harder for small fish to rip them off a hook.

However, using a soft shell crab is typically going to maximize your chances of catching stripers, but you’ll also be running the risk of other types of predatory fish stealing them off the hook or even biting and putting you through an intense fight before you’re able to land them and make another cast with a fresh crab on the hook.

Crabs are known to be more popular in the southern regions of North America and are generally used in the warmer months of the year when they are more prevalent along coastal beaches.

Bunker are commonly known as menhaden and are easily the most common bait used to catch stripers.

Herring might be a very close second as both of these types of bait are generally sold at bait shops with a distinct purpose of catching massive predatory fish like striped bass.

It’s not exceptionally hard to find bait shops that sell frozen or salted batches of cut bunker and herring, but the best strategy for using these bait fish to catch stripers involves finding live bunker and herring.

This usually presents a great problem for most anglers as many bait shops aren’t equipped to keep a steady supply of live bunker and herring and generally prefer to sell them as ‘cut bait.’

In order to find a sizable batch of live bunker and herring, anglers will typically have to go get them right out of the water themselves.

This often requires the use of a cast net and can take a number of hours to net a decent amount of bunker and herring that will be sufficient enough for a day’s journey on the water fishing for striped bass.

Both bunker and herring are quite effective, either in live form or as chunk or cut bait that have been frozen.

In either case, these types of bait are generally considered to be great for striped bass as they will effectively catch striped bass throughout all seasons of the year in southern coastal areas.

When it comes to selecting the a bait for striped bass, the most important bit of information is the age-old advice of ‘match the hatch.’

This basically means that anglers should seek to use baits that are naturally-occurring in the general area they are fishing for striper.

It’s also important to understand that you must use these fishing baits at your own discretion as some of them will work more effectively at different times of the year.

In any case, striped bass are opportunistic feeders and will take advantage of an easy meal when they see one.

You’ll also need to match your gear to the type of bait rig you intend on using, given that stripers can grow to very large sizes you need to match your striper rods, reel and line setup to the size of fish and the style of casting that you will be doing.

In order to narrow down the best type of striper fishing bait choice for the specific area you plan to fish, it’s a good idea to do plenty of research before your trip and determine the main type of prey striped bass will likely be targeting at the time of year you’re going to be fishing.