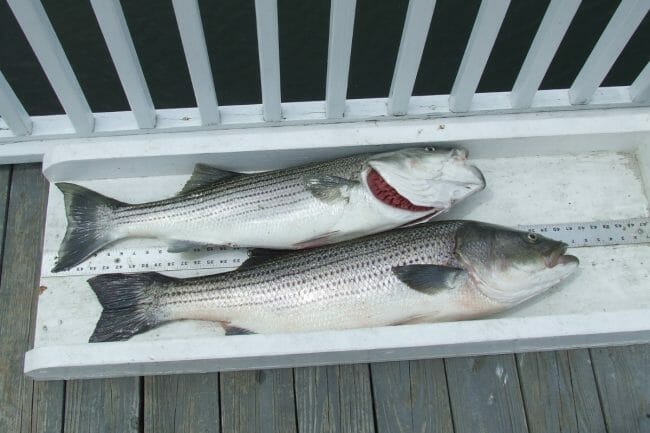 Striped bass are one of the most sought-after sport fish species in the world due to their ability to survive in both saltwater and freshwater conditions.

This means anglers can target them around coastal areas, as well as deep inland as they swim up various river systems and lakes in search of their favorite bait fish species throughout the year.

Another reason striped bass are so popular is their ability to truly bend a rod to unreal degrees in some cases.

These fish are capable of growing to more than 70 pounds in some cases and it is not uncommon to catch stripers that weigh in excess of 50 pounds in areas where they are usually targeted.

In fact, the world record striped bass was caught in Connecticut in 2011 and weighed a whopping 81 pounds.

For anglers who plan to target these massive fish in freshwater environments, there are a number of tips and tactics you’ll want to pay attention to in order to have the greatest possible advantage.

Here are some of the most important facts and information related to freshwater striper fishing.

For most striper enthusiasts, it’s no secret that you can just as easily catch a massive 50-pound behemoth as you can hook into a modest 10 pounder in the same relative area.

Stripers behave quite similarly, whether they are well over the 30 pound mark, or just a few pounds and a couple years old.

It’s commonly accepted that the larger striped bass will usually be caught in saltwater areas as they like to roam the ocean in search of large schools of bait fish.

However, it is quite possible to target massive striped bass in freshwater areas if you know what to look for and have the right tackle.

It’s important to always be prepared to hook into a monster striped bass if you’re exclusively fishing for stripers.

This might save you the headache of losing an expensive lure or rig—or even your favorite striped bass fishing rod—should you hook a monster striped bass with gear and equipment that is too small for the task.

These giant fish are known to quickly and easily break the line of bass anglers and even those who might be crappie fishing in the cold winter months on their favorite lake.

Be sure to use a heavy rod that is capable of standing up to a fight with a 30 pound striped bass as you very well might catch one of this size during your outing.

As most striped bass anglers will agree, it’s much better to be prepared in the event that you run into a large striped bass than to be caught off-guard.

When it comes to fishing freshwater for stripers, the key will be to pay attention to where the shad are found. This is highly important as striped bass will chase schools of shad for miles up into a river system or large reservoir, gorging themselves on these small prey along their journey.

Shad will school up throughout the late winter and early spring months as the temperatures begin to rise.

According to the most experienced striped bass anglers, the best time of the year to catch these giant fish species is during the spring months of March or April, especially throughout the southern portion of the United States.

As the southern states begin to experience warming trends during March, most of the northern areas of the country are still locked up with frigid temperatures and likely will be until well into late April.

Wherever you plan to fish for striped bass, it’s best to pay close attention to the water temperature and plan your attack for when the water reaches a temperature between 60 or 70 degrees Fahrenheit.

This is when striped bass will become most active as the water has not become too hot for them yet and they are still lumbering out of their winter state of sluggishness.

During this time, it’s easy to find striped bass that will chase any lure that resembles a bait fish with intense vigor.

In many cases, stripers will attack lures that are fished just below the surface, making this particular time of year especially exciting for anyone who happens to be fishing for them.

When it comes to deciding what types of bait or lures to use to catch striped bass in freshwater, the choice is obvious—stick with any type of bait that will closely resemble a shad or other species of bait fish that the stipers are chasing after.

In any event, you can’t go wrong by using a type of lure that is meant to resemble a shad as these are the striped bass’ most coveted species of prey.

In freshwater lakes and rivers, striped bass will strike at any type of lure that remotely looks like a shad or small bait fish. These lures include everything from a spoon or a topwater prop bait that churns the water and entices a violent surface strike.

Many anglers prefer to stick with tried-and-true options like crankbaits or jerkbaits as these can be tossed in or around schools of shad and worked in various styles of retrieval to produce strikes from small or large stripers.

In most cases, certain lakes and rivers might have specific types of lures that tend to work better than others for certain reasons. Be sure to study and research the lures that are recommended to be used in the particular body of fresh water that you plan to fish.

This research should always include making a trip to the local bait shop and asking some of the old timers or regular anglers who frequent the waterway.

Natural baits can also be used to catch striped bass of all shapes and sizes. Purchasing large minnows or shad from a local bait shop is always a solid plan if you’re hoping to catch monster striped bass.

These can be rigged on a bobber or even thrown in with a small weight and reeled in along the outside of a school of shad to attract a bite.

Where to Find Freshwater Stripers

Striped bass are no different than other bass species when it comes to the particular type of habitat they prefer in a freshwater lake or river.

More often than not, stripers will be found in or around underwater cover like rocks, trees, and any other kind of structure where they can hide and ambush potential prey.

However, when striped bass are more active and are expected to be chasing after shad and other bait fish, they will usually stick to the open water as they are known to steadily cruise throughout the waterway in search of these schools of fish.

Stripers will search high and low during the spring months until they find a school of shad for bait fish, which they will then harass and feed on until they have eaten their fill.

Trolling with various kinds of lures is an excellent strategy for finding striped bass in any lake or river as they are usually known to prowl the open water a few feet under the surface as they look for schools of shad.

Anglers can have quite a successful outing by trolling the open water with a few A-rigs that will appear to be a small school of shad running through the lake or river.