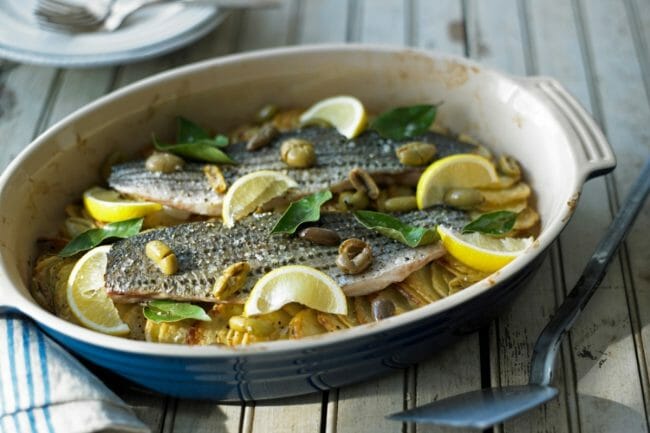 Striped bass are among the most unique and most highly-targeted fish by surf anglers and others who fish along coastal areas.

They are one of the few fish species that are anadromous, which means they are capable of surviving in both freshwater and saltwater. These fish are also capable of growing to immense sizes of well over 50 pounds in the right conditions.

In fact, they are considered to be the best table fare of any fish within the bass family and their meat is very high in nutrients and flavor.

Are striped bass good to eat? Many would agree that they most certainly are and there is lots of information you should know in relation to eating stripers and how to properly cook them. In this article, we will answer the questions related to whether or not you should keep these fish for their fillets.

Are Striped Bass Good to Eat?

If you’re reading this article, you’re either planning to catch striped bass or have already done so and are wondering whether these fish are worth the trouble of filleting and cooking.

Anglers who go through the effort to catch striped bass do so mostly for the thrill of fighting and landing such an impressive fish, but there are also great rewards as it relates to the meat that they offer as well.

Out of the many varieties of fish that are classified as bass, striped bass are considered to be among the best table fare of any. The simple answer to the question of whether striped bass are good to eat is a resounding ‘yes.’

Like most other fish that are capable of growing to massive sizes, striped bass that are very large are also very old. Throughout the time in which these fish grow to be giant trophy stripers, they also accumulate various metals and toxins in their bodies.

These metals and toxins are guaranteed to make very large striped bass taste poorly, no matter what lengths you go to clean and properly cook them.

If you’re planning on eating striped bass, make sure you don’t keep one that’s more than about 36 inches in length as the meat will usually be too soft and filled with unhealthy toxins and metal.

Instead, you should target striped bass that are about 18 to roughly 30 inches to get the ones that will offer the best taste.

What is a Striped Bass?

They are one of the most popular of all freshwater and saltwater game fish species for many reasons, their versatility and great strength and size being just a few.

These fish have very peculiar habits that set them apart from most others. They live most of their lives in the ocean, but will migrate up into the freshwater rivers where they will spawn and lay their eggs.

There are various methods of catching stripers that include fishing with heavy rigs from the surf, as well as fishing from boats far out from the coast. Unlike salmon, which migrate from the sea into freshwater rivers, striped bass do not die after they spawn. Instead, they will live and can actually spawn more than once a year.

The construction of large dams that helped create vast reservoirs in many areas of the United States turned out to be devastating to the striped bass populations that once swam many hundreds of miles up America’s largest rivers.

However, various states in this part of the country have made efforts to restore the striped bass population by stocking them in lakes that are blocked off by dams.

Striped bass can be found as far north as Canada and as far south as Florida. The world record striped bass is a whopping 81-pound behemoth that was caught in the winter off the coast of Connecticut in 2011.

There is no denying that stripers are among the greatest fish in North America and you can truly enjoy your catch by keeping striped bass of the right size, as well as preparing them the right way.

Can You Eat Striped Bass?

Just like the versatility of the striped bass’ many habitats and natural range, this fish can also be cooked and prepared in a wide variety of different methods. The answer to the question of whether or not you can eat striped bass is a resounding yes, as long as the fish is properly cleaned and prepared.

The meat of striped bass is quite unlike most others you’ll find in and around North America. The middle section of the striped bass’ filet is made up of a reddish colored meat that is by far the tastiest portion of this fish’s meat.

This fish’s middle section is known as the bloodline and failing to properly clean striped bass can result in the meat being ruined and becoming overly oily, which will also spoil the taste.

In order to make sure you drain all the blood from the fish before you filet the meat from it, you will need to ‘bleed’ the striper right after you’ve caught it.

There are a variety of different ways to do this, but the easiest one involves taking a pair of fishing pliers and, while holding the fish with your thumb by the mouth, insert the pliers down into the mouth and use it to rip out the striper’s gills.

This needs to be done right after you’ve caught the fish while its heart is still pumping in order to ensure that the blood will be drained as much as possible.

Once you’ve removed these gills from the fish, be sure to dip it down into the water or keep it submerged in a bucket of water as the bleeding portion of the remaining gills will quickly clot and slow the amount of blood from draining.

Once you’ve done this, you can get ready to filet and cook your striped bass.

Striped bass are known for growing very large, which means they will have a longer lifespan than most saltwater or freshwater fish. This long lifespan also means that more mercury will accumulate in the fish’s meat over time and is another reason why you should not bother with eating striped bass that are longer than about 36 inches.

The mercury levels in striped bass and other fish have been rising in recent decades and biologists and scientists believe that various industries are to blame as their products and manufacturing processes lead to more mercury finding its way into the waters around the United States.

Striped bass are known to be fish that contain a slightly higher amount of mercury than other species.

It’s recommended that you consume no more than two servings of striped bass per week with one serving being about 4 ounces of meat.

Striped bass are known as one of the best-tasting fish in North America. They are loaded with essential vitamins and minerals that help provide the human body with many benefits from increased metabolism to enhanced brain function.

The taste of each individual striped bass will differ depending on where the fish was caught. Stripers that are caught in saltwater tend to have very flaky meat and offer a bit more flavor than those caught in freshwater.

Stripers that come from freshwater lakes or rivers will usually have more fleshy meat, but will lack the flavor of saltwater striped bass.

Be sure to bleed the fish out before filleting it so that it will have the best possible flavor when cooking.

How to Cook Striped Bass

Striped bass can be cooked virtually any way you might cook almost all other fish. These fish can be deep-fried, poached, broiled, smoked, grilled, or even toasted.

Overcooking striper fillets will cause them to lose their flavor, so be sure that you don’t go overboard with whatever cooking method you choose.

One of the best ways to cook striped bass and maintain the flavor of the meat is to broil it. By coating the filet with butter and various citrus fruit juices like lemon, as well as spices that are commonly used in grilling fish, you can cook these fish in a way that helps them soak up the spices and butter to create a hearty and bold flavor you won’t soon forget.

You can also grill these fish using the same method of basting them with butter, lemon juice and spices like paprika, salt and pepper.

Be sure to cook them at a temperature of no more than 180 degrees Fahrenheit and turn the fish fillets after every 5 minutes.

You can use various online videos and other resources to view the many methods for preparing striped bass fillets, as well as the most popular recipes used by avid anglers.