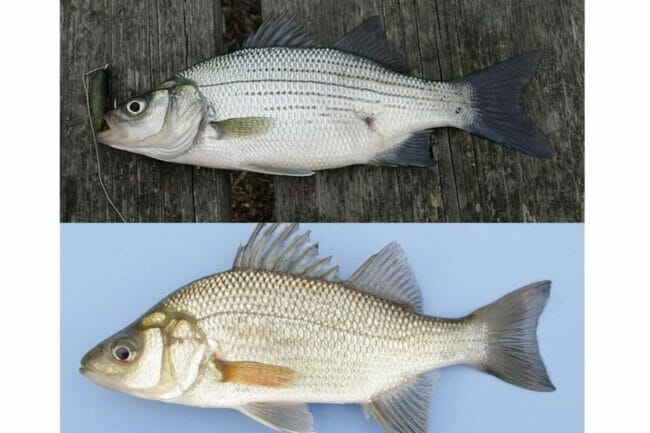 They are not as popular as some of the more sought-after freshwater species like crappie or largemouth bass, but there’s a good chance that if you’re fishing in lakes and reservoirs throughout the United States, either a white bass or white perch could end up on your hook at some point.

Both of these species are actually part of the same genus within the Temperature bass family.

The fact that they are tied together in the same biological family means that white bass and white perch have many of the same feeding and behavior patterns, as well as spawning rituals and other characteristics that are similar.

What is a White Bass?

White bass are found throughout most of the United States’ freshwater river systems that feed into many of the most well-known lakes and reservoirs that are visited by millions of anglers each year.

They are dispersed throughout the southeastern part of America, as well as the Midwest along the Mississippi River system and other waterways that stretch upward into southern Canada.

The color of white bass is not actually what most anglers would refer to as ‘white.’ It’s actually known to have a greenish tint on the top part of their bodies along the back and dorsal fins, but their sides are silver-toned.

The scales on the sides of the white bass’ body have very defined, somewhat bold horizontal black stripes.

This silver coloration to the scales along the sides of white bass are quite similar to crappie in the way that their scales create a silvery sheen underwater.

It’s often easy for seasoned anglers to be able to tell what a white bass looks like in comparison to a white perch and this silver tone is often the most common way of identifying the fish.

What is a White Perch?

The white perch is often found throughout the Great Lakes regions and the rivers and tributaries that feed into them. They are found in most freshwater lakes where anglers like to fish for panfish species like crappie, perch, bream and others.

In fact, many anglers like to target white perch specifically when ice fishing in certain parts of the Great Lakes region because they are one of the better-tasting freshwater fish in this part of the continent.

The white perch certainly lives up to its name in terms of the fish’s color. Many anglers recognize white perch by their distinct white-colored bellies and the fact that they lack the type of defined, black horizontal scales along their sides.

It’s white perch is known to have the same type of greenish tint on top of the fish’s back that’s very similar to white bass and other bass species.

Both white bass and white perch are not known to grow to enormous sizes, even in optimal conditions. White bass are known to share many similarities with striped bass, but they are not capable of reaching the massive sizes that stipers will at full maturity.

In most cases, white bass are known to grow to a length of roughly 10 to 12 inches and might weigh up to 2 pounds in the best conditions and with the right diet.

White bass only live to be roughly 5 or 6 years old, but some are capable of living a few years past that and reaching a size that any angler familiar with them would consider a trophy fish.

The world record white bass was caught in North Dakota in 2017 and tipped the scales at 4.3 pounds. Any white bass over the 2-pound mark is considered to be a trophy-sized catch.

The white perch is so similar in terms of their size, profile and shape to the white bass that many anglers have trouble distinguishing them from one another.

White perch typically grow to roughly the same size white bass are known for reaching. They often can grow to the same 10 or 12-inch length that white bass might be, as well as the same weight of roughly 2 pounds.

Most of the largest white perch are caught by ice anglers during the frigid winter months when the lakes and reservoirs are frozen-thick with multiple feet of ice covering them.

Mature white perch that are considered trophy-size species might be as long as 16 to 18 inches and can be 2 to 3 pounds. The world record white perch was caught in 2016 by an angler in Massachusetts. The fish weighed 3.8 pounds, which is a monster-size for a white perch.

White bass are well-known for traveling in large schools in the many rivers and lakes that are connected by the Mississippi River system, as well as other sections of the United States.

These large schools of fish will chase after shad, minnows and other types of bait fish throughout the year.

When white bass are schooling and chasing after small bait fish in this manner, it’s quite easy to catch them with any type of bait or lure resembling a shad. In the cold winter months, white bass are usually found in deeper water as far down as 50’ in some cases.

They like to stay close to structure in deep water and will emerge when the water begins to warm up, which is when they will school together and chase after bait fish.

White perch, on the other hand, are a very interesting fish as they are known to be a semi-anadromous species. This means that white perch are capable of living most of their lives in either saltwater or freshwater, or a combination of both. Traditionally, white perch will behave in the same way a striped bass will as a matter of instinct.

They are described more than 100 years ago as living most of their lives in the ocean only to swim up into the rivers and tributaries during their yearly spawning phase.

Many white perch numbers have been landlocked for decades after the construction of large dams along some of America’s biggest rivers many years ago.

These fish have not displayed any negative effects from having to spend their entire lives in freshwater and there are known to be many white perch that still live much of their lives in the ocean.

There are five basic points of identification that anglers can look to in order to distinguish between these two types of fish.

These identification factors might take some practice to key in on these differences before you’ll be able to tell whether the fish you’ve caught is a white bass or a white perch.

White bass are not as sought after as white perch, mostly because the white bass don’t have a desirable taste.

The white perch species are widely known as one of the finer delicacies when it comes to freshwater fish.

Although these two species might appear to be very similar, each of these identification points can be used by anglers to differentiate them with certainty.