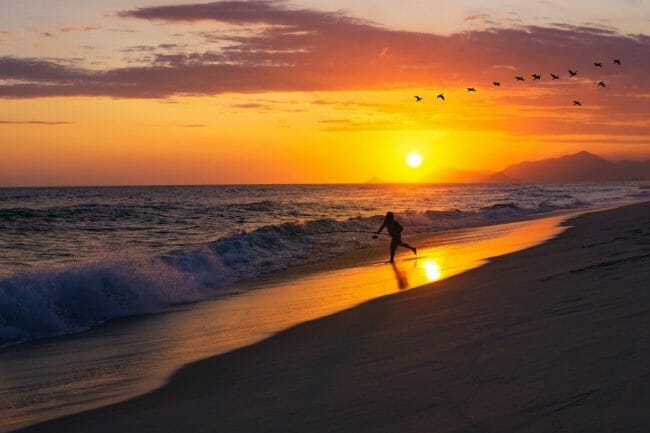 Surf fishing is something that most anglers consider to be a daytime activity since the tides are shifting at night as it can be difficult to see your rig and line. However, more and more anglers are venturing out under the cover of darkness to catch the many different types of fish that feed after the sun goes down.

There are a number of benefits to fishing at night such as the fact that you can avoid the blazing sunlight and the winds are usually not as bad either. Plus, there aren’t any beach-goers trying to swim in the water, which means that you’re pretty much free to fish anywhere you want along the beach.

If you’re looking to get started surf fishing at night, we’ve compiled this article to give you some of the most basic tips and techniques you’ll need to know in order to be successful.

Since you’re fishing at night, you won’t have to contend with beach-goers who are swimming in the water and obstructing some of the best fishing spots in the same way they do during the daytime.

You’re also not having to contend with other anglers who might already have the best locations to fish locked down early in the morning. This is one of the most freeing aspects of surf fishing at night and can serve as a huge advantage to anglers who truly utilize their freedom to fish virtually anywhere on the beach.

Saltwater fish will usually prowl around coastal areas throughout the night in search of various prey that might be swimming among the waves near the beach.

Sharks are also more active at night and surf anglers typically will hook into a few sharks while fishing at night. The best locations for surf fishing at night tend to be relatively the same as the top spots for daytime fishing.

Also Read: Where to Cast When Beach Fishing

One of the most important things to keep in mind is that you’re going to be dealing with the changing tide at night, which means water will surge into the shore, covering areas that are usually exposed during the daytime.

This can be a major advantage for anglers who take the time to go out and scout during the daylight hours for a suitable fishing spot that offers significant depth changes or pockets.

As the tide continues to move in, you may have to relocate or simply move your gear and fishing position back a number of feet in order to avoid being soaked.

Be sure to look for areas of the beach that form deep holes or spots where large fish will lurk in wait for unsuspecting bait fish to swim by where they can easily be ambushed.

It’s also very important that you check the weather and be prepared for any potential rain or storms that might move into the area. Storms are known to move very quickly near coastal areas and can come up without much warning, leaving you scrambling to get your gear back to your vehicle or where you’re staying.

Also, keep an eye out for strong winds that could develop as this will certainly make fishing at night much more difficult.

Best Baits to Use for Surf Fishing at Night

When it comes to selecting the best type of bait to use, there are a number of factors that come into play that will determine whether or not you have a successful outing on the beach at night.

As always, it’s very important to do your research prior to arriving at your fishing spot and gaining a more thorough understanding of the different type of fish in the area you’re at, as well as what type of prey those game fish species like to go after at night.

Remember that fish will use their sense of smell to a much greater degree at night as they aren’t able to see as well in the water. Certain surf baits that work during the daytime won’t always prove to be successful under the cover of darkness.

It’s usually a good idea to use baits that are naturally occurring in the area during the specific time of year you’re fishing from the surf. Things like sand fleas, crabs, squid, shrimp, herring, and other cut bait are typically considered to be ideal choices that anglers can’t really go wrong with.

As with any other type of fishing, you’ll want to ‘match the hatch’ and use baits or lures that closely resemble the same thing your target fish are going after. If you’re hoping to catch larger fish like sharks, be sure to rig a larger size bait and hook on your line.

When it comes to what kind of tackle you’ll need for surf fishing at night, your overall rod selection, as well as line, hooks and sinkers will remain relatively the same as what you’d use during the daytime.

If you’re specifically trying to catch large sized fish like sharks, be sure that you have a rod that’s big and heavy enough to handle fighting a fully-grown shark in the surf.

Since you’ll have much more room and won’t be impeded by beach goers and other anglers for the most part, it’s a good idea to use multiple rods to help maximize your chances of catching fish. Most surf anglers who venture out at night typically use at least two or three rods and some will even have as many as 5 or more per angler.

If you use multiple surf fishing rods, be sure that you’re keeping a very close eye on each rod in order to reel in any fish that happen to bite.

Failing to do so can usually result in the fish running parallel to the shoreline and getting tangled in the other lines you have set in the water, which can be a massive headache and will take loads of time to either untangle or cut the lines and tie all your surf rigs back on.

Other tips for Night Surf Fishing

Fish behavior will be slightly different at night than during the daytime in most areas. Instead of staying well away from the shoreline beyond the breaking waves, fish are much more apt to bite close to the shore.

This means that the usual strategy of casting your rig out as far as possible doesn’t necessarily have to be the case. If you’re using multiple rods, you’ll be best served if you utilize them in such a way as to fish multiple distances from the shoreline with one rod as far out as you can cast and the others set at incrementally shorter distances.

Most anglers who have much experience surf fishing at night recommend that it’s best to stay out of areas that have larger waves when possible.

This is a tip that rings true during the daytime, as well as the night, but fish will almost certainly be hunting for potential prey in areas where the waves are a bit more calm. This usually allows them to more easily chase after fleeing bait fish without losing them in the waves.

Be sure to bring along plenty of lights that will properly illuminate your surroundings and help you see your rods and fishing line as well as possible. Having a bright headlamp is a must when it comes to surf fishing at night.