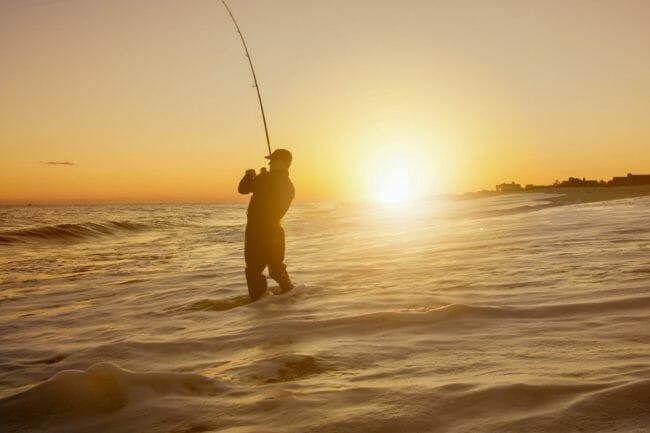 Spanish mackerel are among the most popular fish species that saltwater anglers target for a few simple reasons. They make excellent table fare, are highly prevalent along the coastal United States, and they are loads of fun to catch.

They are commonly caught by anglers fishing out in the open ocean, but can also be caught with the right tackle and techniques from the shoreline.

If you’re like most anglers who fish along coastal areas, you probably don’t own a sportfishing boat, so you’re left to try your luck from the shore in the surf.

Contrary to popular belief, surf fishing for spanish mackerel can be just as productive as fishing over deep water reefs and shipwrecks miles offshore.

In fact, surf fishing for spanish mackerel is an excellent way to catch these tasty species and any angler can have a successful outing if they stick to a few time-tested methods that have proven effective when it comes to catching spanish mackerel.

Spanish mackerel are one of the most prevalent fish in the waters surrounding the United States and South American coastlines. They are migratory fish that will move along the coastline and inhabit certain areas depending on the temperature of the water in an area.

As the weather cools during the late fall and early winter months, spanish mackerel will make their way down the American coastline down to the Florida Keys and the Carribean where they will remain until the climate heats back up again.

These fish will generally move in large schools where they are known to hunt down other creatures like squid and shrimp. They will often follow these types of prey far into the shallow waters near the coast and they will cruise along the surf looking for potential meals.

When they venture into these shallow waters just off the shore, spanish mackerel will begin to target various types of bait fish that they can easily out-swim and chase down for an easy meal.

The spanish mackerel is nearly identical to the larger king mackerel, but has a few distinguishing features like the bright yellow spots dotting the sides of their bodies. These fish are virtually built for speed and power, which makes them one of the most fun fish in the ocean to catch.

When to Catch Spanish Mackerel

If you’re looking to target spanish mackerel, the best time of the year to do so is generally once the weather heats up during the spring months along most coastal shorelines.

For most anglers who fish along the coast in the Gulf of Mexico, spanish mackerel will start to make their presence known around early April as the water temperature moves closer to the optimal 70 degree mark.

From that time through the hot summer months is one of the most ideal times to target spanish mackerel. In most areas along the Gulf of Mexico and the Atlantic coastline, these fish will stick around until mid-to-late November when they will make their way back south toward the equator.

If you’re relatively new to saltwater fishing, or fishing for spanish mackerel in general, there are a few solid tips you’ll want to keep in mind. One of the best indicators that fish are nearby are seagulls and other birds that fly overhead and keep a close eye on the water for unsuspecting prey.

These birds will be the first to spot fish like spanish mackerel chasing after small schools of bait fish and picking off any stragglers or simply swimming straight into the school and attacking them head-on.

If you’re walking along the coastline and see a cluster of birds overhead that are periodically diving down into the water, you can rest assured that it’s a prime spot for catching fish like spanish mackerel.

In most cases, you can watch these birds for a few minutes and gain a better understanding of just how far out these fish are depending on the general location where the birds are diving down into the water.

As soon as you spot an area like this, it’s a good idea to set up your gear and claim the spot as other anglers will likely move in quickly as well.

This means that you’ll have a good chance at catching these fish from a pier, jetty, bridges, or other structures that are known locations where bait fish will take refuge in or around the structures and hide from predators.

How to Catch Spanish Mackerel in the Surf

Unlike most other fish species that anglers target along the coast, spanish mackerel generally prefer to strike at a moving target instead of a stationary bait that doesn’t move.

Anglers must tap into the predatory instincts of spanish mackerel and entice them to bite by making their lure of choice look like a frantic, fleeing bait fish that’s desperately trying to get away from the predator.

For this reason, anglers who target spanish mackerel will often use lures like spoons, plugs, tube lures, and a variety of other methods. There’s no need to use the same long, heavy surf rod and surf reel setup that you might utilize for typical surf fishing as you’ll need something that’s capable of throwing a smaller, lighter lure out as far as possible.

In most cases, a 7 or 8-foot rod with a smaller saltwater spinning reel attached will be more productive than the heavy surf fishing rigs that are equipped with 50 pound test line.

When surf fishing for spanish mackerel, be ready to use a totally different approach than you might go with for any other type of fish.

Spanish mackerel are aggressive feeders and are much more likely to strike at a lure that’s rapidly moving across the water’s surface, or just below the top of the waves.

A good rule of thumb for beginner anglers who are unaccustomed to fishing for spanish mackerel is to retrieve your lure at a speed that you might expect to be much too fast for most fish to bite.

In reality, anglers who do this will get more strikes as a fast-moving lure somehow activates the spanish mackerel’s instinctive need to chase down fleeing bait fish and take advantage of an opportunity to grab an easy meal.

One of the best strategies for ripping a lure through the water in the right spot to catch spanish mackerel is to cast the bait out well past a sandbar and work it back toward the rising bar very quickly.

If you’re doing this for several minutes without a bite, it’s advisable to slow down your retrieve just a bit and experiment with various speeds. Sometimes a spanish mackerel will strike at a lure that’s moving at just the right pace.

Spanish mackerel often travel in packs or schools, so if you catch one, there’s a high likelihood of there being others in the near vicinity looking to feed on any potential bait fish they can.

Most avid surf anglers will have their usual long, heavy rods cast far out past the breaking waves and securely fashioned in rod-holders.

It’s a good idea to have lighter surf fishing tackle that’s specially rigged to fish for Spanish Mackerel as you can quickly grab this rod and make a few casts when you see several birds congregating overhead.

In doing so, you can take advantage of the moment and land a few decent-sized Spanish Mackerel while you’re fishing for other species in the surf.