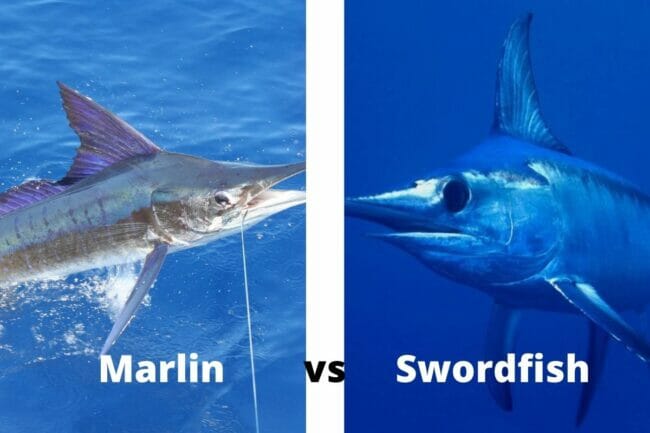 Marlin and swordfish are two of the most popular species that sportfish anglers seek after in the waters of the open ocean.

Both species have similar characteristics and novice anglers or beginners might even mistake one for the other as they share many different characteristics.

When it comes to fishing for these two types of fish, there are a few things you can refer to in order to tell the main difference between swordfish vs marlin.

The overall body shape and size are relatively the same when it comes to both swordfish and marlin. It is true that marlin are capable of growing to greater lengths than a swordfish, but each fish are both very large in respect to their weight and length.

If you’re planning an offshore fishing trip and will need to know how to tell the difference between swordfish and marlin, we’ve compiled this article to help anglers distinguish between the two.

What is a Swordfish?

The swordfish is one of the top predators in the ocean that’s faster and stronger than nearly any other sportfish. Their massive, muscular bodies are shaped like a torpedo, which gives them the ability to pull exceptionally harder than most other fish.

It’s fairly easy to see why so many anglers see these large fish as one of the top few sportfish species in the world.

Swordfish undergo one of the most drastic changes in sizes of any other fish in the ocean. They begin their lives as miniscule fish that are virtually invisible to the naked eye, but will grow to massive sizes over the course of several years. They live out on the open ocean many miles away from shorelines in most cases.

Swordfish can grow to enormous sizes of up to 1400 pounds and as long as 12 feet in the right circumstances. The swordfish draws its name from its long, sword-like bill that it uses to help swim through the water at blistering speeds to chase down various prey.

The fish will use this unique bill by thrashing its head side-to-side, which works to disorient or injure their prey long enough for the swordfish to strike.

Unlike most other fish species that are cold-blooded, the swordfish are capable of warming their blood around their brain and eyes, which helps them hunt down prey at extreme depths where the water temperature is usually frigid.

These fish are highly-prized for their nutrient-packed meat, as well as the extreme levels most anglers have to go in order to catch them.

What is a Marlin?

Many avid anglers consider the marlin to be among the most exciting and challenging fish in the ocean to catch. They are found throughout many parts of the world and, like the swordfish, live on the open ocean where waters are considerably deeper than they are around coastal areas.

There are a few different types of marlin species, but the blue marlin is undoubtedly the most popular as it can grow to enormous sizes and is incredibly challenging to catch.

They are prized, mostly, for their ability to grow to massive sizes. In ideal environments, the blue marlin is capable of reaching a length that is roughly the same as the largest variety of swordfish at about 14 feet.

However, the blue marlin is capable of packing on serious mass and can sometimes tip the scales at nearly 2,000 pounds.

There have even been tales from anglers from more than a century ago of blue marlins that weighed well over a ton, but these claims are only backed by photographs and lack the needed official weight certifications that today’s record marlin require to be certified.

Nevertheless, the blue marlin is considered by most anglers to be the undisputed king of the ocean among sportfish species.

Blue marlins are known to travel hundreds or even thousands of miles during their annual migration patterns. They will swim along the warm ocean currents that span the globe and will feed on larger fish species like tuna and mackerel as their main source of food.

Despite their immense size, they are capable of swimming at blazing speeds and many anglers describe a fight with a trophy blue marlin to be unlike any other sportfish species in the world in terms of difficulty.

The Difference Between Swordfish and Marlin

To the unskilled eye, swordfish and marlin can appear to be very similar in most cases. They share the same long, muscular body and each type of fish also has the long, sword-like snout that they use to pierce the water and also disorient their prey when feeding.

However, there are some proven methods anglers can use to tell the difference in swordfish vs marlin, despite these similarities.

For the most part, both swordfish and marlin will usually have a similar color pattern. Their upper portion will be a very dark blue color while their lower half is made up of a lighter hue that’s almost white.

The middle of the fish is a line that is yellow in color and differs in thickness depending on which species you’re looking at.

The most surefire way to tell the difference between these two fish lie in the shape and structure of their fins, as well as a few other identifying factors.

For the most part, the overall appearance of a swordfish is nearly indistinguishable from a marlin. However, you can spot a few major differences by looking more closely at the fish’s body shapes, as well as a few other characteristics.

The body shape of a swordfish is more rounded than a marlin and has a slightly higher profile toward its front portion. The marlin usually has a body shape that doesn’t taper down in the same way a swordfish typically does.

The overall body size of a swordfish is usually smaller than a full-grown marlin, but this can be tricky to tell the difference if you catch a fish that’s not fully mature yet.

The fins are what most anglers look to in order to tell the difference between swordfish and marlin. The dorsal fins of the swordfish are vastly different from a marlin in that they are not elongated and look more like a shark’s fins than any other fish.

A marlin’s dorsal fins extend across the length of the fish’s upper body, which is usually described as looking like a sail instead of one single fin.

The skin of the swordfish is usually described as being more silvery in color, especially compared to a marlin, which can have a range of different vibrant colors and even stripes along the sides of their body.

The most obvious difference between a swordfish and any marlin species is the overall size. Most marlin are capable of reaching well over 1000 pounds while only a few swordfish will ever grow to be this large.

Another differentiating factor is the fish’s length, which is usually over 12 feet for marlin while a fully-grown swordfish will usually grow to be about 10 to 12 feet in the most extreme case.

There are multiple species of marlin and the black marlin is known to most closely resemble a swordfish.

The black marlin shares the similar fin shape of a swordfish, but anglers can typically tell the difference between the two species very quickly because a black marlin will have a very dark or black color while the swordfish will almost always be lighter and silver in color.

In some cases, a swordfish will have a dark blue color along their upper half, much like the marlin, but the marlin’s color differences are more drastic and usually separated by a distinct yellow or other color stripe down the middle of their body.

A blue marlin’s dorsal fin will be elongated and often run the length of their upper back toward the tail, slightly similar to a sailfish, but not quite as high.

The blue marlin is also the easiest to distinguish from the swordfish because of its intense blue coloration and yellow midsection.

Are Swordfish Good to Eat?

Swordfish are an extremely popular menu item for restaurants all over the world. They are a fish species that’s packed with a high number of nutrients, as well as the right amount of protein and fats that are considered to be very healthy in comparison to other fish species.

Simply put, the swordfish are easily one of the top choices among anglers looking for a healthy, tasty meal.

The taste of the swordfish’s meat is usually described as being very mild compared to most other fish. Their meat is usually cut into ‘steaks’ and grilled to produce the best flavor.

Most people prefer swordfish to other types of fish as its meat is soft and holds together quite well no matter how you cook it.

Are Marlin Good to Eat?

While the marlin and swordfish share quite a bit of similarities, their meat is drastically different when it comes to flavor and whether or not it’s safe to eat.

Also Read: Can You Eat Marlin?

Marlin are known as having very high levels of mercury throughout much of the world and it’s often recommended that anglers don’t consume large amounts of this fish as they can risk taking in too much mercury, especially by eating the meat from a very large marlin.

There are some portions of the world where marlin have less mercury in their meat and they are considered mostly safe to eat in smaller portions.

Marlin is typically best when smoked, but can also produce decent-tasting results when grilled with the right spices and other elements.