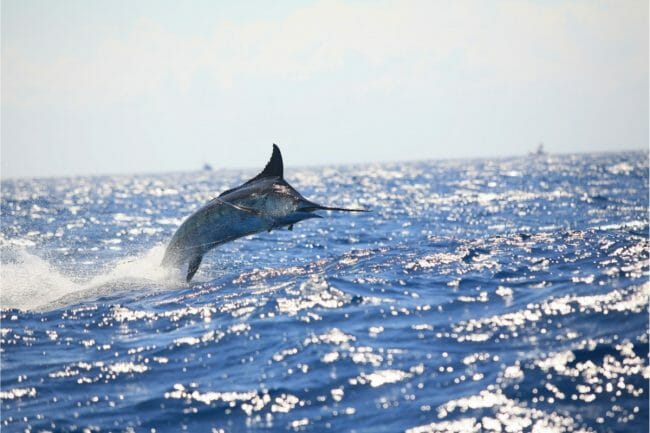 Can you eat marlin and what do they taste like?

Blue marlin are perhaps the most sought-after game fish species in the world. They are known for their distinct pointed nose and torpedo-like body that’s built for speed and power.

Anglers from all over the world venture to remote areas and fish for hours on end without so much as a bite just to have a shot at catching this majestic fish. Once you do finally catch one, the most common question from anglers is, are marlin good to eat?

Though they are packed with thick meat along their muscular bodies, marlin are actually one of the fish that many experts tell you to stay away from.

Some species of marlin are known to have very high levels of mercury and should not be consumed by anyone.

However, there are some marlin that you can eat and they are sometimes described as being among the better-tasting fish you can catch in open offshore waters.

If you want to learn more about marlins and everything that pertains to preparing, cooking and eating them, read on.

Are Marlin Good to Eat?

Marlin are among the most aggressive species of saltwater fish in the world. Anglers work incredibly hard sometimes to catch them and it is understandable to have the desire to enjoy some of your reward in the form of a freshly-cooked meal.

However, you need to be aware that eating marlin can be dangerous if you don’t know which species of marlin are safe to consume, as well as the right ways you need to prepare them.

They are often compared to swordfish, which are a very popular menu item of seafood restaurants and other eateries.

Marlin is quite a bit more popular in the countries of South America than anywhere else, mainly for the fact that they are more prevalent along the coastline of these nations.

People from some countries like Japan are known to eat marlin raw in the form of sashimi and it is considered a delicacy.

There’s no doubt that marlin are considered the Holy Grail of sportfishing for many anglers. The highly-coveted blue marlin is easily a species that is on the bucket list of any serious fisherman or woman.

Black and white photographs of famous anglers from many decades ago show us images with a giant marlin hoisted up several feet above the head of a person at the docks of a marina.

It’s also true that many anglers will often have a marlin mount prominently displayed in their office or home as a symbol of accomplishment since it is no small task to land such a fish.

Marlin are known to live in the open waters of the ocean, often many miles from the coastline. They feature a characteristic long, sword-like nose and elongated body with a lengthy dorsal fin that has a high point near the front.

They are capable of swimming at very high speeds thanks to the unique design of their tails, which have very long lobes that make it possible for the tail to reach water that is undisturbed by the fish’s body.

This is a peculiar trait that almost no other fish possess, especially at this size and it gives them an incredible amount of power in the water.

Most anglers target marlin for the distinct combination of massive size and immense powerful swimming ability. It takes a great amount of skill, determination and physical fitness to land such a creature and it’s no wonder why so many anglers view the marlin as the greatest sportfish in the ocean.

Can You Eat Marlin?

Yes, it is true that marlin can be eaten, but anglers should be cautious about which types of marlin they choose to keep and cook.

They also have a strong taste that is not to everyone’s liking, so there are much better fish species out there to eat, if you are planing on catching one it is best done in a catch and release style.

Marlin are known to have quite a bit of meat on their bodies compared to other fish. They can grow to more than 500 pounds and one fish is enough to feed dozens of people in most cases.

Also Read: Can You Eat Starfish?

Striped marlin are known to have a much higher mercury level than most other marlin species and it’s a good idea to refrain from eating large amounts of blue marlin as well, for reasons we will explain later.

You can eat cooked marlin and it’s also safe to consume their meat raw as well. This practice is quite common in many parts of the world, especially around Asia and should be done with caution as you can easily digest too much mercury by eating large amounts of raw marlin or sashimi.

The main reason most fish have a higher amount of mercury in their flesh is due to the fact that they live much longer than other species.

A longer life in the ocean is almost guaranteed to result in a higher amount of mercury as it has had more time to accumulate in their meat over the years.

Marlin are capable of growing much faster than most other types of fish and can reach a length of about 7 feet in less than a decade in some cases.

It’s important to study up on marlins and learn which areas of the world are known for having very high mercury levels in the water.

Some regions are better than others and you can usually expect marlin caught around the coast of Hawaii to have very low levels of mercury compared to those taken from other parts of the Pacific. Their massive bodies are also known to have high levels of other toxins as well.

Marlin is quite unlike most other fish in the sea except for tuna and swordfish. These species share a few common qualities and characteristics with marlin, so it makes sense that they might have a similar taste in some cases.

Some people describe marlin as looking more like swordfish fillets than anything else, but noting that it has a distinctly different taste.

Marlin are usually described as having a taste that is more like tuna than any other fish species. Those with great amounts of experience eating both fish say that marlin typically taste similar to tuna, but possess a stronger flavor that some might find undesirable.

Of course, the taste of a marlin will always have more to do with how they are cooked than anything else and many people report that smoked marlin is among their favorite seafood dishes.

Those who have eaten raw marlin in the form of sashimi say that it tastes more like tuna and the meat quality and consistency are also comparable.

The general taste of marlin is often too strong for most people and there is a good reason why they are not usually on the menu of many restaurants outside of the regions where the species is commonly caught.

Many anglers argue that marlin is a sportfish that should be released instead of being eaten. This line of thinking is becoming more common among anglers that regularly fish for marlin as there is a definite concern about the shrinking numbers of marlin in areas where they were once plentiful.

Over the last several decades, many anglers have kept most of the marlin they’ve caught in order to have them mounted.

The large numbers of marlin that are harvested each year is beginning to take a toll on the overall population of the fish and places that were once teeming with marlin are now seeing sparse numbers of the majestic fish.

How to Cook Marlin

Like most other types of popular game fish species, there are many different ways to cook and prepare marlin. Some are more prevalent than others depending on where you are in the world, but there are plenty of impressive recipes for marlin that will delight your taste buds.

Smoke marlin is likely the most popular form of cooking these fish and is a common practice around areas like Cabo San Lucas, Mexico where anglers from all over the world travel to catch trophy-sized marlin weighing hundreds of pounds.

Grilling marlin is perhaps the second-most popular method of cooking these fish as it allows you to add in a wide variety of different spices and other elements like lemon and orange flavoring.

Pan-seared marlin steaks are a popular menu item at many restaurants in Hawaii and other areas where marlin are commonly caught. This cooking method is another one that’s highly recommended for producing a better-tasting product than almost any other way of preparing the fish.

You can also enjoy raw marlin in small quantities in the form of sashimi, poke, or carpaccio, but it’s very important that you consume the meat as fresh as possible to avoid harmful bacteria.

We hope we have given you some answers to the question; can you eat marlin? They are edible but some species have higher mercury level than others and are best avoided, they also have a very strong taste that not a lot of people like.