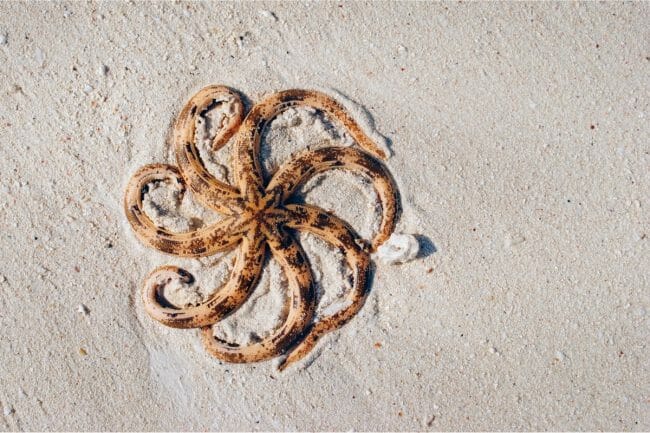 There are countless species of sea creatures that you might find if you’re out fishing, snorkeling, or spearfishing around coastal areas. The reefs that are found just off the coast of most beaches are home to abundant numbers of marine life.

Some of these animals are more popular than others when it comes to whether or not people actually want to eat them.

Starfish are one type of creature that most people don’t consider as edible, but can be cooked and eaten.

Some cultures around the world view starfish as having mystical properties and believe that they are able to provide regenerating life energy and vitality.

This is mostly due to the fact that starfish are one of the only known creatures that are capable of regenerating a severed limb after it’s been cut off.

While they are not the tastiest type of animal you’ll find in the ocean, some people do like to catch and eat starfish.

In this article, we will cover starfish and everything that is related to cooking and eating them.

If you’ve never tried to eat a starfish, you might want to take the tips we’ll lay out in this piece and use your knowledge to try this delicacy for yourself.

Are Starfish Good to Eat?

The question of whether starfish are good to eat comes down to one’s personal tastes. Some people prefer seafood that is less fishy and has unique flavors while others embrace the natural, salty taste and often chewy texture of some fish and sea creatures that are edible.

Starfish do have a taste that is unlike any other animal in the sea and some people describe it as one that you will either ‘love or hate’ depending on your own preferences and how it’s cooked.

There are a large variety of starfish species throughout the world and some are actually poisonous. The ones that contain dangerous poison are generally located around Asia and are not found near North America.

However, it’s always good to be cautious and make sure that you are aware of the exact type of starfish species you’re eating before you ever take it from the water and start the cleaning and cooking process.

Starfish are actually loaded with various nutrients that are essential to healthy eating. They are packed with protein and it’s estimated that there are roughly 22 grams of protein in every 3.5-ounce serving of starfish.

As you might have guessed, they have virtually no fat in their bodies and starfish also don’t contain any sugars or carbs either. If you’re looking for a very unique and healthy option when it comes to seafood, starfish is an excellent choice.

What is a Starfish?

Starfish are some of the most peculiar creatures in the ocean. There are roughly 1,800 different species of known starfish that exist throughout the world and they each have their own distinct physiology.

Most people think of starfish as having the same five-pointed star shape and body structure, but some starfish species actually have up to 9 or more arms that might be very long and slender or short and stubby.

Starfish also come in a huge variety of different colors that help them blend in with the ocean like around them or the reefs they live near.

Most people are unaware that starfish are not actually fish, as in creatures with fins and vertebrae, but are actually echinoderms, which are a form of invertebrate animals.

Instead of circulating blood throughout their body, a starfish lives with a water vascular system, which takes in seawater like a sponge and circulates it through a series of channels inside the starfish’s body.

Starfish don’t swim or have any sort of identifying features like fins or tails, but they do actually have a tiny mouth on the center of their underside, as well as eyes, These eyes are not located in the place where we typically expect them to be, but are actually on the end of each of the starfish’s arms.

The eyes work differently than most fish eyes and are mainly intended to allow the starfish to sense light and darkness.

You can sometimes find starfish that have washed up on the beach, but most people who want to eat fresh starfish will go out and catch them in the wild. Starfish are normally found around rocky areas near the beach, as well as lying on the seafloor in and around underwater reefs.

It’s not very hard to find them as they usually stick out from the rest of the marine life around them, but you should be very careful when collecting starfish and make sure that you’re getting a species that is edible and not one that’s poisonous.

Starfish can live for more than 30 years and in the wild and some species are known to grow to more than 10 pounds. You will mostly find starfish in tropical regions and the most common of the many species have the typical 5 arms that look like a star shape.

Can You Eat Starfish?

Starfish are edible and some offer plenty of nutrition in the form of proteins and essential vitamins that are very healthy. Starfish are a delicacy in many Asian food markets and many people prefer them to the common sea urchin, which is also eaten for various reasons.

They have a very distinct texture that is unlike most other sea creatures. Starfish are mostly made up of chewy, moist flesh that has a taste that many have described as being something that most people might not prefer when it comes to seafood.

You can eat starfish in a variety of ways. Some people prefer to dice them up into small chunks while others will cook them whole on a stick or in smaller pieces.

Most people don’t eat starfish for the taste, but rather for the health benefits or perceived physiological benefits. These creatures are loaded with B12 vitamins and are a great source of protein energy when cooked properly.

Like most other sea creatures, starfish do collect some levels of mercury if they are exposed to a high amount of it in the water. Some fish are known to have very high levels of mercury while others are often very safe to eat at any time.

Starfish are not known to have dangerously high mercury levels and you’re probably safe to eat virtually as much as you want.

There’s a good reason why starfish are not among the most popular dishes at most seafood restaurants. Their flesh is known to be described as chewy and often has a very salty taste that is typically undesirable to most people.

Depending on how the starfish is cooked, the meat can have a texture that is more like beef, or it can be very soft to the point that it nearly dissolves in your mouth.

While they are not considered to be the most palatable creature in the ocean, starfish can be cooked with certain spices and other elements so that they have a decent taste that is tolerable to the average person.

Most people who don’t like starfish often point to their mushy texture as the main reason why they will not eat starfish.

How to Cook Starfish

Like most other marine animals, there are a wide variety of different ways you can prepare and cook starfish. In some parts of Asia, they are commonly cut into small chunks and boiled to be added to soup.

Most people around the world will typically grill starfish in order to cook them in a way that toughens their flesh and makes it easier to eat instead of being too chewy.

You can also cut a starfish up into small pieces and use certain combinations of batter and flour to fry them into ‘starfish bites.’ The most common method that’s used throughout the world is to boil them as they make good bits of chewy meat that are perfect in various soups.

You can find plenty of different recipes for starfish online, but if you want to experience an authentic method of cooking these creatures that people usually prefer, it’s best to order them in a Chinese or Asian restaurant.

These restaurants usually offer starfish as a soup or in bite-sized chunks that are grilled or fried according to a specific recipe that can sometimes be quite tasty.