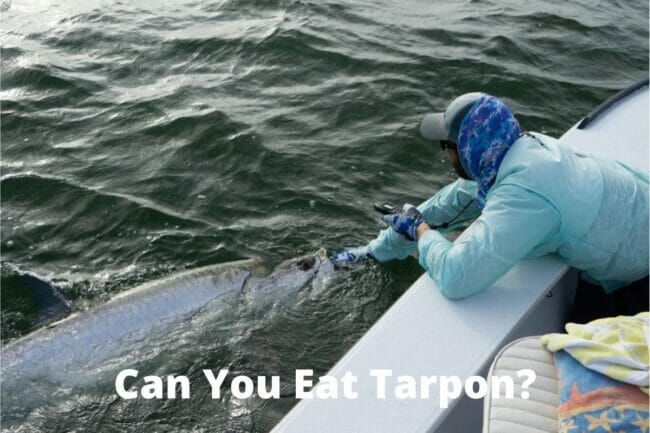 Tarpon are commonly considered to be one of the most exciting game fish species in the world. They are known to grow to immense sizes and anglers usually target tarpon because of their giant size rather than their contribution to seafood cuisine.

The topic of catching tarpon typically brings novice anglers or those who are not familiar with these monster fish species to ask the same question:

In this article, we’ll discuss this question and more information related to cooking and eating tarpon, as well as other tarpon fishing facts.

Both species are virtually identical in almost every way, but the Atlantic tarpon draws many thousands of anglers to the coast of Florida each year.

They are distinct in both their size and stature, as well as their other appearance characteristics.

Tarpon, sometimes referred to as Silver Sides, Silver King, and other names which indicate their unique appearance, have very large scales that appear to be much like steel armor and each fish’s overall color is a bright, silver sheen that’s unmistakable for avid tarpon anglers.

These fish are usually caught in areas where the water temperature is above 70 degrees Fahrenheit, but tarpon don’t often prefer water that’s more than roughly 88 degrees.

Once hooked, tarpon often display a number of acrobatic and extremely powerful moves on the end of the line.

Can You Eat Tarpon?

Yes, tarpon are just as edible as any other fish, but there are a few major drawbacks in terms of their flesh, the taste and other concerns that make the Silver Kings more of a catch-and-release type of fish.

The main question many people often wonder in relation to these massive fish are whether or not they are edible, as well as to what degree are they edible compared to other saltwater game fish species?

Most of the common concerns related to eating tarpon are that they are an incredibly bony fish, especially in relation to their overall size.

Tarpon are very much like a trout when it comes to their overall body and bone structure. These large fish have numerous small, thin bones that somehow always seem to end up in the fillets no matter how much care you take in removing them.

If you’re hungry enough and willing to deal with the long time periods it usually takes to de-scale tarpon, as well as to filet or try to clean them in a way that makes them easier to cook and eat, then you can absolutely eat tarpon.

What Size Tarpon is Best for Eating?

Tarpon are famous for growing to incredible sizes, especially in parts of southern Florida where the water remains somewhat warm throughout the entire year.

However, there are a few things you need to know in terms of what the best size to eat is when it comes to tarpon.

Like most other fish species, especially those capable of growing to very large sizes of more than 60 pounds, the tarpon’s flesh can take on a very different texture and flavor as the fish gets older and bigger.

It’s widely known that, if you’re going to keep, clean and cook a tarpon, it’s usually best to keep the smaller ones that are not bigger than about 100 pounds or so.

The IGFA world record tarpon is noted as being a 286-pound monster that was caught off the coast of Guinea-Bisseau, Africa in 2003. A fish of this immense size is typically going to have extremely soft meat that makes it difficult to cook in the usual methods like frying or grilling.

The average size tarpon ranges anywhere from roughly 20 to 80 pounds in most parts of the world. However, there are different laws and regulations regarding tarpon and harvesting these fish depending on where you catch them throughout the world.

It must be noted that every angler who intends to harvest and eat any species of fish should be aware of any laws and regulations pertaining to that particular species in the area where they are fishing.

For instance, tarpon is strictly a catch-and-release only fish in the state of Florida, which means you’re not allowed to put it in a live-well or walk around the beach taking photos of your catch.

In the Sunshine State, every angler who catches a tarpon is allowed to snap a few quick photos, but is encouraged to put the fish back into the water as quickly as possible to maximize its potential for survival.

Just one state over in Georgia, however, anglers are allowed to harvest tarpon as long as they are at least 68-inches-long.

It’s very important to follow any laws in the state you’re fishing in to ensure that you don’t illegally harvest or handle a tarpon.

Thankfully, for most areas, you can simply do a quick online search and find out the specific laws and any other regulations related to virtually any type of species.

This question is one of the most obscure when it comes to catching and eating tarpon. It’s often difficult to be a genuine tarpon connoisseur who really has a deep knowledge and understanding of the best ways to cook these fish unless you’re an avid tarpon angler.

If you cook and prepare it the right way, tarpon can be somewhat edible to those who are capable of dealing with an especially smelly fish.

Tarpon is known to have a very strong fishy smell, which makes most anglers shy away from keeping them. However, if you’re willing to deal with this strong smell, as well as the bony flesh, you can actually cook and eat tarpon if you choose to.

The two main reasons why most anglers don’t generally want to eat tarpon are because of the strong smell and the bony structure of the fish’s meat. Even if you do go to the trouble to clean and cook this fish, you’re likely to spend a great deal of time—as you’re eating—picking out small bones.

This is especially unpleasant and makes most anglers really appreciate the finer delicacies of the ocean that have a desirable taste and can be filleted without any bones ending up on your plate.

As a side note, you can actually consume tarpon raw if you had some reason for wanting to do so (I imagine that this would only pertain to a survival situation). If you’re going to eat raw tarpon, it’s highly important to be sure that you only eat raw tarpon that’s caught in saltwater.

This is because the saltwater is capable of purging certain types of germs and bacteria that live on the outside of the fish’s scales and skin.

How to Cook a Tarpon

There are various methods you can use to cook a tarpon, but it’s especially important that you properly and thoroughly clean the fish before cooking. It’s common to discard the fish’s skin and spend a good deal of time de-scaling them in order to help avoid any harmful bacteria on the exterior ending up in your meat.

There are certain ways you can de-bone the tarpon to get most of the small, pesky bones out of the meat before cooking and eating these fish, but you’re probably going to end up with some bones in the meat anyway.

If you take extra care when filleting the fish, you can usually cut around some portions that have lots of small bones, or you can try to remove them using your hands before preparing the filet to be cooked.

Since these fish have very soft flesh that might not stay together when cooked, it’s sometimes best to make fried cakes or patties out of the meat. When prepared in this manner, tarpon can be surprisingly tasty if you use the right spices and flavors, as well as a skilled cook.

This method involves cooking the tarpon fillets for roughly 10 minutes before removing the meat from the bones and putting it into a food processor or even a blender to get the fish’s meat into finely-cut pieces that will easily mix with the rest of your recipe. It’s a time-consuming process, but worth the effort if you’re determined to eat your catch.

Tarpon might not be the most desirable fish in the ocean, but you can often clean, cook and eat them just like most other species.

You can also store tarpon in the freezer if you need to, which might actually help kill off harmful germs that reside on the skin or meat.

If you’re going to eat tarpon, you’d best roll up your sleeves and get ready to do the work as these fish require a bit more effort to properly enjoy as a culinary dish.