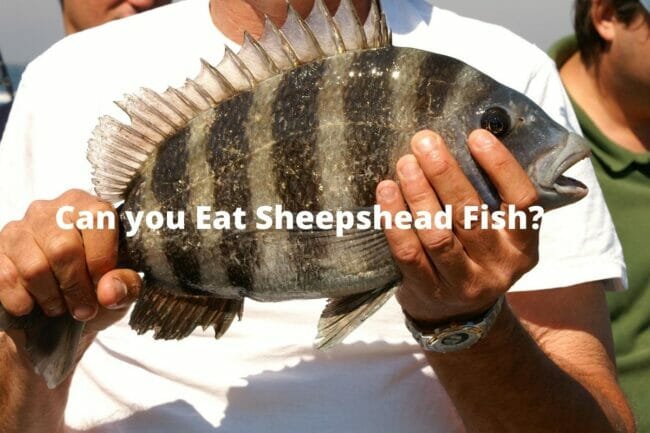 Sheepshead is one of the more peculiar fish species found along the coastlines of the United States. They are known for their distinct black and white stripes, but their teeth structure is unlike any other game fish species in North America.

Most anglers who encounter these fish and catch them while inshore fishing or bottom-fishing along offshore reefs often ask the question: can you eat sheepshead fish?

We’ve created this article to answer that question, as well as to discuss more about the sheepshead species and ways that you can prepare and cook it.

What is a Sheepshead Fish?

Sheepshead fish get their name from their strange appearance. Their teeth look nothing like most other fish, but instead closely resemble the front teeth of a human in many ways.

Sheepshead have incisors and even molars, which they use to chew and crush various types of prey.

These fish can be found around the Atlantic coastline of both North and South America. They are often caught by anglers who are fishing inshore areas like bays, sound, or around docks and other structures, but it’s also common to catch them further offshore as well.

Sheephead will move into deeper offshore waters in the winter when the water temperature drops. They will spawn in these deeper offshore areas around various structures like reefs or anything else they can gather around.

After the spawn, they will return to shallow waters around the shore where they look for barnacles on rocks and other solid structures, as well as crabs, mussels and oysters along with other prey.

How Big Do Sheepshead Fish Grow?

Sheepshead don’t typically grow to the massive sizes that other saltwater fish species usually reach. They usually average about 1 to 8 pounds and might measure anywhere from 14 to 18 inches in length.

In the right conditions, a sheepshead might exceed 10 pounds, which anglers who routinely target them will consider to be a trophy fish.

The IGFA world record for sheepshead is a massive 21-pound giant that was caught off the New Orleans coast in 1982. While a sheepshead fish that exceeds 20 pounds is rare, there are a few tales of anglers catching fish that weigh more than 22 pounds.

How to Identify Sheephead

As we’ve already noted, sheepshead are probably one of the most unique types of saltwater fish species native to the North American coastline. They do appear to be somewhat similar to a few other species and some anglers might often confuse them for black drum.

However, there are some distinct characteristics and features that sheepshead have which you can use to confidently identify them.

Their teeth are the most unique part of the fish and often appear to be very ‘human-like’ in many ways. Anglers who are unfamiliar with sheepshead are often startled at their strange dentition, but these teeth allow them to crush and bite crabs shells, oysters, mussels and other creatures that other types of fish are unable to eat.

Sheepshead have a distinct appearance in their coloration as their bodies feature dark vertical stripes on either side that are separated by white scales.

Their dorsal fin extends all the way down their back and has a serrated appearance when fully extended. A sheepshead will also have a small tail that features a very clear V-shaped fork.

Can You Eat Sheepshead Fish?

The answer you’ll get from anglers and anyone who’s tried to eat sheepshead is a resounding “yes.” You absolutely can eat sheepshead fish and they are actually considered to be one of the best-tasting species found along most shoreline areas along the Gulf of Mexico, as well as the Carribean Islands.

Sheepshead have a very sweet flavor and their meat is often described as a lighter-colored filet that is firm and ideal for frying or grilling with a variety of different recipes.

While some fish species tend to lose their meat quality and flavor as they grow larger and older, sheepshead retain much of the good flavor and texture that they have throughout their lives.

It should be noted that smaller sheepshead are often the more ideal choices if you’re looking to keep the ones that will be best for eating.

Most anglers who usually keep sheepshead so they can prepare and cook them will harvest fish that are anywhere from 3 to 5 pounds as sheepshead of this size are typically best in terms of meat quality, texture and flavor.

Most chefs or anglers who have caught and cooked these peculiar fish often describe their filets as having a distinct taste when compared to most other types of game fish species. The taste is usually described as sweet instead of being overly salty or ‘fishy’ as some other species are usually said to taste.

It’s quite unlike any other fish you’ll find in the Atlantic Ocean and the species that’s said to be closest to tasting like a sheepshead is the triggerfish, which is one of the other more sought-after species that’s known to be a culinary delight.

The sheepshead’s sweet and tasty flavor comes mostly from the fish’s diet, which consists of mussels, barnacles, oysters, crabs and virtually any hard-shelled prey that the average inshore species will pass by.

This flavor is described as being much more desirable than many other species that are commonly caught and harvested for cooking.

Most anglers usually discard the sheepshead fish due to its ugly appearance, but those who are aware of their flavor and meat quality consider the sheepshead to be one of the best-eating fish you can catch in parts of the Atlantic coastline.

As we’ve noted already, the sheepshead’s meat is usually more firm than most other types of fish that live in the same relative area. This is often believed to be due to the sheepshead’s omnivorous diet in which it consumed both plants and a wide variety of different creatures.

It’s known that most omnivorous fish tend to have a much more firm texture and the filets will maintain much of this texture without being overly soft. When fried or grilled, the sheepshead’s meat is described as having the right amount of flaking.

How to Prepare Sheepshead

There is virtually no wrong way to prepare a sheepshead fish when you’re getting ready to cook them. These fish are fairly small and compact in stature and it’s relatively easy to cut away their skin and scales to produce nicely-portioned filets.

You would cut and filet a sheepshead in the same way you would any other fish by making a deep vertical cut just behind the pectoral fin and cutting down until you reach bone.

Then, you should angle your knife parallel to the fish’s body so that you can cut away as much meat as possible. As you cut, be careful to keep the knife blade on the outside of the meat and cut away the skin, which should leave a nicely-portioned filet.

The sheepshead’s filets maintain their texture and firmness very well, which allows you to cook these fish in pretty much any manner you choose.

Most anglers prefer to put them on a grill and add in any other spices or marinate they want, but the sheepshead’s meat has a taste that doesn’t necessarily need to be ‘covered-up’ in the same way other fish species tend to require.

How to Cook Sheepshead

There are numerous ways you can cook a sheepshead fish and virtually any routine fish recipe will work well. These fish often greatly appeal, in terms of flavor, to anyone who likes oysters and crabs as the meat tends to have a very similar taste.

The old saying of “you are what you eat” certainly comes into play with fish like the sheepshead and this peculiar species’ diet gives it a very desirable taste that isn’t hard to work with in terms of cooking.

Most people who commonly cook sheepshead like to fry them in a light batter that consists of mild spices or citrus-flavored ingredients.

The best overall manner that most people use to cook sheepshead involves baking them since the fish takes most types of spices very well and maintains much of its desirable taste, regardless of how it’s cooked.

It’s common to season the sheepshead filets with lemon juice, salt and pepper as this creates a nice balance which helps to bring out the fish’s flavor without masking it.

Some anglers like to add in some other ingredients like oregano, basil or olives in with the sheepshead filets to help bring out the shellfish taste.

If you’re able to locate and catch sheepshead in an area where they are in season and can be harvested, we encourage you to explore the many different ways you can prepare and cook them.

While many anglers might throw these ‘ugly’ fish back into the water, avid anglers know that the sheepshead are among the best-tasting fish in the ocean.