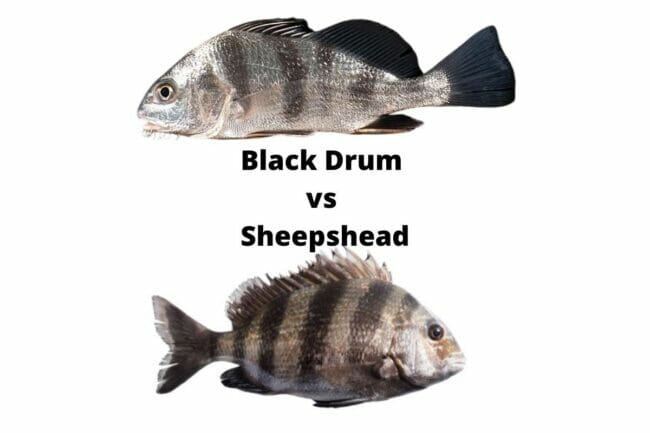 Two of the most popular types of inshore saltwater fish species are black drum and sheepshead. Each of these are found in abundance around the coast of the Atlantic Ocean and the Gulf of Mexico.

If you’re not quite sure how to tell the difference between black drum vs sheepshead, we’ve compiled this article to serve as a handy guide.

The black drum and sheepshead fish are two of the most sought-after species around the coastal waters of the eastern United States. Inshore anglers routinely target black drum as they are fairly easy to catch and have a good taste when prepared and cooked properly.

Sheepshead are caught a bit further away from the shore, but sometimes you’ll see them come into coastal waters and gravitate toward dock pilings and other structures.

These types of fish are commonly found in marshy areas and there are many instances where you might catch both species in the same habitat.

Many anglers who might not be very familiar with these types of fish can get confused about whether they have caught a black drum vs sheepshead.

What is a Black Drum?

Black drum are often found in the coastal areas throughout the eastern half of the United States. They are much more prevalent further south and are known to prefer waters that are more shallow, which many anglers consider to be inshore areas.

They are known to be a bottom-feeding variety of fish and often cruise around various waterways using the small barbs on the underside of their mouth to seek out food.

Some of the black drum’s favorite menu items include clams, oysters, mussels and crabs, which they find in abundant numbers along the warmer southern coastal areas.

Black drum have exceptionally strong teeth that allow them to eat such prey, but they also like to feed on just about anything else they manage to find along their prime habitat.

These fish have very tough teeth that line their mouth and allow them to chew and crush hard-shelled prey that most other fish might not consider trying to eat due to the hardness of their external shell.

What is a Sheepshead Fish?

It’s known that sheepshead have a much greater range when it comes to the regions where they are commonly found. Anglers usually catch them anywhere from the southeastern Canadian coast all the way down to the warm, temperate waters of the Gulf of Mexico.

It’s also common to find sheepshead in and around the Carribean Islands, as well as South America, but they seem to be found in greater numbers in the areas north of the equatorial divide.

One of the major differences between black drum vs sheepshead is that the latter variation don’t confine themselves to waters near the coast. In fact, sheepshead usually venture well away from land and might stay near artificial reefs and shipwrecks that are more than 100 feet deep, especially in the Gulf of Mexico.

Sheepshead have a very similar diet compared to black drum. They often eat crabs, mussels. oysters, as well as many other types of prey that they find along the bottom of the ocean floor or coastal inlets.

A sheepshead has one of the most unique mouths of any fish in the world. To many anglers, it appears to be comical, but the human-like teeth of the sheepshead allows the fish to easily scrape away barnacles from hard surfaces like rocks, stone or concrete pillars and the metal surface of shipwrecks.

Black drum are capable of reaching much larger sizes than sheepshead, but the average size for a black drum is roughly 40 to 60 inches while they often weigh about 50 to 80 pounds. It’s well known among anglers that these fish can grow to be much larger than sheepshead when they have a healthy diet and ideal conditions.

The IGFA world record black drum tipped the scales at a whopping 146 pounds and was caught in Texas, where these species of fish find abundant prey, as well as the ideal climate and water temperature to reach such sizes.

Sheepshead are markedly different in terms of their size capacity. Most sheepshead only grow to about 14 to 18 inches in length and might weigh anywhere from 1 to 8 pounds on average.

They also tend to grow to much larger sizes around the Texas and Louisiana coastline in the Gulf of Mexico as this region has near-perfect conditions for sheepshead to reach their maximum potential.

The world record sheepshead was a 21 pound whopper that was caught off the coast of Louisiana in 1982, although there have been stories of anglers catching some that were bigger which were not certified on official scales.

Appearance of Black Drum and Sheepshead

The sheepshead fish gets its name from its distinct head shape, as well as its highly unique teeth. Many anglers, long ago, would catch a sheepshead and note that it looked very much like the head of a sheep with its sloping nose and pronounced upper and lower teeth. This is perhaps the most striking difference between a black drum and a sheepshead.

If you catch a small fish that has the distinct black vertical stripes on its body, it can sometimes be hard to know what type of fish you have.

Most anglers are not aware that black drum, when they are juveniles, will have visible black stripes that are strikingly similar to the sheepshead.

However, there are a few characteristics that separate the sheepshead vs black drum which anglers can use to differentiate each type of fish.

Black drum tend to have a more elongated body shape compared to sheepshead. Their body’s widest point will always be at the very beginning of its dorsal fin as it gradually tapers back downward further back toward the tail. Sheepshead have a more rounded shape that is usually described as a ‘football-shaped’ profile.

The sheepshead gets its name from the appearance it has with its black eyes and strange-looking teeth. This fish’s eyes and mouth appear to be very similar to a sheep’s head, but the face of the black drum couldn’t be more different.

Black drum have very hard teeth, but they don’t look at all like the sheepshead’s teeth, which have very defined incisors and molars.

Anglers often compare the teeth of the sheepshead to that of a human and their dental structure often startles beginner anglers who are unaware of this fact.

The fins of both the sheepshead vs black drum are also another very distinct difference between the two. In fact, this is one of the best ways to quickly identify the fish without having to peer into its mouth and examine the teeth structure.

The black drum will always have a separate dorsal fin with another, wider fin on its back near the tail.

The black drum’s dorsal fin is also shaped very differently from the sheepshead and will usually be higher and will come to a point. The dorsal fin of the sheepshead has a serrated appearance and runs across the entire length of its back.

The tail fin of the black drum is another identification point as it is much wider and doesn’t feature the same fork as the sheepshead. The sheepshead’s tail is more narrow and has a clear, V-shaped fork.

Taste of Black Drum vs Sheepshead

Black drum are known to be a decent fish when it comes to the quality and flavor of their meat. It’s not the best that the ocean has to offer, but you might certainly consider keeping any black drum you catch that are within the size limits of the state you’re fishing in so that you can cook it later.

Their meat is often described as having a very similar taste to that of a red drum, or redfish, and it is true that the meat’s taste and texture will greatly decline as the fish grows larger with age.

The best black drum, from a culinary standpoint, tends to be smaller fish as the meat is very white and has a firm texture.

According to anglers who have cooked and eaten both types of fish, sheepshead have a much more desirable taste and texture. Their meat has a very sweet flavor and the overall quality doesn’t really decline as the fish gets larger.

The confusion as to whether an angler has caught a black drum vs sheepshead can easily be solved using the identification points we’ve noted in this article.

Both fish are among the more sought-after species that inshore anglers like to target and you can sharpen your fishing skills by remembering how to tell the difference between black drum vs sheepshead.