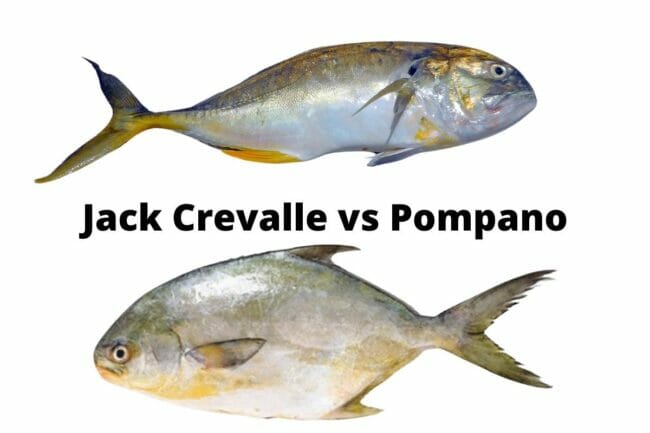 Most avid saltwater anglers will agree that there are few more exciting and challenging fish to catch than Jack Crevalle and pompano. These two fish have a similar, distinct body shape and overall appearance and, very often, one is mistaken for the other.

If you’re one of the many anglers who gets confused when it comes to telling whether a fish is a Jack Crevalle vs pompano, we’ve compiled this article to help identify both species using certain features and characteristics.

Both the Jack Crevalle and pompano belong to the same family of fish species that’s known as Carangidae. This family also includes jack mackerels, blue runners and scads and is one of the more peculiar fish families that anglers target with a rod and reel.

The fish in the Carangidae family are well-known for being very tough, strong and incredibly smart compared to other species that live in the same relative habitat range.

There’s no mistaking the particular times each year when the pompano or Jack Crevalle species are making their migratory ‘runs’ along the coastline.

Anglers from all over the country, and even the world, will flock to parts of the coast along the Gulf of Mexico or the Atlantic Ocean when either one of these species are moving through the region.

In order to be able to better identify each type of fish, it’s important that we first begin with a solid understanding of each species.

Jack Crevalle are found along temperate waters in the Atlantic Ocean ranging from the southeastern coast of Brazil to the Mediterranean Sea and into North America. They are known to grow quite large when compared to other fish within the Carangidae family and can reach sizes of 60 pounds in some cases.

Anglers routinely catch Jack Crevalle throughout the shallows around the coast, but these fish can also be found in deeper offshore waters around reefs at certain times of the year.

They are usually found around grass beds, flats, shallow reefs and sandy-bottom bays throughout their known range. In many cases, Jack Crevalle are known to swim up into brackish rivers and freshwater streams that empty into the ocean.

It’s much more common to catch Jack Crevalle in shallow water, but they have been studied by biologists swimming at depths of more than 1,000 feet.

Mature Jack Crevalle typically prefer deeper water than young, juvenile fish of the same species. Jacks often use any structure they can find to hunt for prey, including oil rigs, sunken ships and other areas.

Few fish are as sought-after as Florida pompano around the coastline of the southern United States and parts of the Caribbean. They are known for being one of the more fierce fighters in the sea and trying to land one on a light rod and reel is exhilarating, to say the least.

There are multiple variations of pompano throughout the world, many of them live in the Atlantic Ocean. There are a sizable number of Pacific pompano that live along the coast of Mexico and California.

They have a distinct silvery skin that usually appears to be a somewhat translucent blue when the sunlight reflects off of it. The different types of pompano have slight variations when compared to one another, but they all share much of the same main features and characteristics.

Unlike the Jack Crevalle, Florida pompano do not typically grow to be much more than a few pounds with even the most favorable conditions and the best diet.

Despite their small stature, they have an improbable amount of power and will certainly make the drag of any angler’s reel scream when initially hooked. However, some pompano can grow to more than 7 pounds in optimal conditions.

Pompano often swim in huge schools of hundreds, or even thousands of fish at a time. They usually begin their annual migration during the early spring of each year when the water temperatures begin to warm up along the northern Caribbean.

Pompano will venture as far north as the New England coastline during the heat of the summer and will make their way back down the coast, headed toward the Caribbean once the cool fall weather sets in.

The Jack Crevalle are generally around 12 to 24 inches in length and might weigh anywhere from 3 to 5 pounds on average.

However, in the right conditions and if they are capable of living long enough, some Jack Crevalle are known to grow to more than 50 pounds and as long as 4 feet.

As with most other fish species, the female Jack Crevalle are often much larger than the males. The largest jack on record was recently caught in 2021 by a 12-year-old boy off the coast of Palm City, Florida. The monster Jack Crevalle weighed a whopping 58 pounds.

In most areas, pompano only grow to around 1 or 2 pounds at the most, but there are cases of single fish that live to be a few years older than the others in their habitat. These fish might grow to more than 5 pounds and are considered, by all accounts, to be once-in-a-lifetime trophy fish.

Also Read: Can You Eat Pompano?

The average pompano is typically 12 inches in length and will weigh anywhere from 1 to 3 pounds. The IGFA world record pompano is a 8.4-pound whopper that was landed in 1999, but there actually have been some reports of larger fish—weighing as much as 10 pounds—being caught that weren’t officially certified.

Jack Crevalle typically have a gold-colored greenish hue, or sometimes a bluish tint along their backs with golden scales on their sides. Their fins are usually bright yellow or almost gold in color. Their heads have a very round shape that gives them a distinct look compared to other types of fish in the same family.

Pompano are more silvery in color and often have a shimmering blue tint, especially underwater. Their yellow-colored fins are mostly why so many anglers confuse them as Jack Crevalles, or vice versa.

Pompano have a head shape that slopes downward at a more gradual angle, which gives them a ‘football-like’ body profile when laid on one side.

If you catch a smaller fish that has similarities between what you know to be a Jack Crevalle or a pompano, there are a few things you should look for to distinguish which one it actually is.

1. The pectoral fin of a Jack Crevalle is much longer than a pompano’s and it will lengthen into a sharp point, whereas the pompano’s pectoral fin is shorter and rounded at the tip.

2. A Jack Crevalle’s dorsal fin has two-parts, which actually makes it look more like two fins with the front one being much shorter than the rear fin. This two-part dorsal fin is likely the easiest way to tell a Jack Crevalle from a pompano, but if it’s a juvenile jack, the fins might not be fully-developed.

3. All of the Jack Crevalle’s fins taper down into a sharp point, but the fins of a pompano are often more rounded. Another major identifying factor is the tail. A pompano has a tail that makes a uniform V-shape while the Jack Crevalle’s tail is very deeply-forked and a bit more thin.

Most anglers consider Jack Crevalle to be a poor-tasting game fish compared to most others that roam the coastline. Their flesh is very dark red in color and often has a strong, fishy taste.

When cooking them, most people will use lemon or lime, as well as strong spices to help dampen the strong flavor.

Pompano, on the other hand, is considered to be one of the more delicious fish in the ocean. It is said to have a very rich taste that some describe as either sweet or salty depending on the fish’s diet.

The flesh of the pompano is very flaky and can be prepared in a number of different ways to please those who enjoy a true seafood delicacy.

Most anglers who catch a Jack Crevalle will agree that they are among the hardest-pulling species in the world, on a pound-for-pound basis. They will make one incredibly-hard pull initially, but will usually tire out more quickly than a pompano.

Pompano are generally caught close to the shoreline out to about 100 feet from shore when they are in their migratory patterns. They are known to be fierce fighters and will pull hard, using their wide body profile to help leverage themselves against your rod.

Both the Jack Crevalle and pompano are two fish that any avid angler should have on their bucket-list as species they want to catch. Each one is distinct in its own right and catching a Jack Crevalle or pompano is one of the biggest thrills in the sportfishing world.