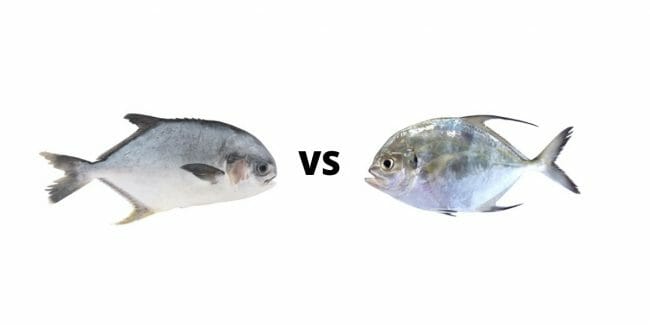 A lot of anglers seem to be confused between Permit vs Pompano, while both fish are of similar size and shape there are some subtle differences that can help you to tell them apart.

Many avid surf fishing anglers will tell you that pompano and permit are easily among their favorite targets.

In most cases, when you’re able to catch one of these fish, you’re likely to find a large school of them and can catch many fish in a short amount of time.

If you’re familiar with both species, you’re already aware that pompano and permit look virtually identical except for a few identifying factors.

Being able to tell whether you’ve caught a permit or pompano is important if you’re fishing for one species that’s in season while the other is not.

These fish look so much like one another that seasoned anglers often get confused on whether the fish they have just caught is a permit or pompano.

If you’re one of these anglers who isn’t very familiar with these species, we’ve put together this article to help explain the major differences in permit and pompano so that you can quickly and easily tell them apart when you catch either one.

The tail fins of permit are deeply forked and V-shaped. Pompano tails are wider, at least as broad as their bodies. Permits have a prominent hump over each eye. Pompano have a lot more consistent slope from back to nose.

Permit can also grow to a considerably larger size than Pompano.

What is a Permit Fish?

Permit fish(Trachinotus falcatus) which belong to the Carangidae family are a game fish that can be found in the western Atlantic Ocean from Massachusetts down through the Caribbean Islands and as far south as Brazil.

Permit are one of the more popular sportfish species you’ll find around Florida and the Gulf of Mexico. As we noted already, they appear to be nearly identical to the pompano, yet they are not quite as popular.

Pompano are sought by commercial fishing ventures and are one of the species you’ll find on the menu at most seafood restaurants along the coastal areas.

One of the main differences in these two fish species is the fact that permit are capable of growing much larger than pompano.

They are known to reach sizes that are up to 15 or even 20 pounds in some cases, which is exponentially larger than the biggest pompano you’ll find swimming along the coast of the southern United States.

You can usually find permit in the same locations where you can typically expect to locate other popular sportfish species along reefs, grass flats, offshore wrecks, deep channels, oil platforms and other spots.

Biologists actually know very little about permit compared to their smaller cousin, the pompano, but they are currently working to understand the fish’s habits and behavior in relation to their habitat.

Most anglers target permit along the flats around the Florida coast since this seems to be their favorite spot to hang out at certain times of the year.

What is a Pompano?

Pompano fish(Trachinotus carolinus) belong to the Carangidae family and is found along the western coast of the Atlantic Ocean.

Pompano are known to be one of the most sought-after sportfish along the coast of Florida and the southeastern United States.

Their body shape appears to be nearly identical to permit and they have some of the same basic feeding habits throughout the year.

As we mentioned, pompano are not capable of growing to the sizes that permit can and the largest known Florida pompano species that reaches 8 pounds is considered a trophy fish.

Pompano have a reputation for traveling in very large schools that sweep across the coastal areas from the Caribbean Islands all the way north to Virginia.

Anglers from all over the United States, as well as from different parts of the world, will come to the Florida coast or in other locations throughout the Gulf of Mexico or the Atlantic side to catch what’s known as the ‘pompano run.’

They are among the most popular surf fishing species because anglers are able to catch them in very large quantities very near to the shore. Pompano love to feed on crabs, sand fleas, and a range of other sea creatures that you’ll find near the shore.

In fact, they will voraciously feed on everything in sight along a stretch of coastline as they are migrating through to the point where it seems like they have desolated all other forms of life outside of fish.

If you notice a patch of water that seems to be especially cloudy with debris and other matter, you might be looking at an area where pompano are feeding or searching for food.

When pompano feed, they are known to greatly disturb the ocean floor as they look for sand fleas and crabs or other creatures. In doing so, they will create vast sections of turbid water that gives away their position.

What’s the Difference Between Permit and Pompano?

The main differences between permit versus pompano will be in their body’s design and the fins. Both fish have slightly different-looking fins that will usually give you a hint as to what species of fish you’ve caught.

These fins on a permit species will not have the characteristic point, but will instead have more of a curve and will actually point back to their tail instead of away from their body.

Permit will also have a slight bump on their head just above their eye that makes their body shape appear more square than the pompano.

If you compare each fish side-by-side, you’ll be able to see that pompano have a much more gradually-sloping head shape and a shorter profile than permit.

The tail of permit are more deeply-set with a V-shape than pompano. The permit’s tail will be shorter and have a more acute angle in the V of their tail while the pompano’s tail will also feature the same V-shape, but will be more of an open angle.

Permit are much larger than pompano and can grow to sizes that sometimes dwarf the Florida pompano.

Their body has a very bright, silver-colored skin that makes them stand out when looking at both permit and pompano in close proximity. The overall coloration of permit are not is not as diverse as pompano and they can sometimes grow up to 3 feet in length.

Smaller permit will usually have a slightly-orange patch of skin along their bellies, as well as their fins or on the underside of their mouth.

This patch of skin can sometimes look yellow in color, but is small and not as prominent as you’ll find in a pompano.

Pompano are known to be much more colorful than the permit and their overall appearance is not quite the same when you’re looking specifically at the hue of each fish.

Pompano have a more greenish or gray color along their back that certainly sets them apart from permit.

Their body shape is nearly identical at first glance, but upon closer inspection, you’ll find that pompano have a more gently-sloping head shape and their body is not as wide as a permit.

Permit are known to be very tough fighters and they also have more muscle than pompano. They are described as having a good taste and are one of the more popular fish when it comes to sportfish angling.

According to avid anglers and those who have tried both species of fish, permit are usually the lesser of the two when it comes to overall taste. Their meat is often more tough than pompano and the flavor is often stronger as well.

You can enjoy them grilled, fried or cooked a number of other ways, but they won’t have the pleasant, sweet taste that pompano offer.

Pompano is the clear winner when it comes to which fish has the best-tasting meat.

They can be cooked in a wide variety of different methods and pompano is a common menu item for many seafood restaurants along the Florida coast all the way up the eastern side of the United States.

Their meat is described as having a more delicate taste that isn’t as strong as permit.

It’s more desirable for most people and pairs nicely with various spices and other flavor elements. The meat is also softer and is more suited for making raw sashimi than permit fillets will be.

We hope that you now understand the difference in Permit vs Pompano and that you know what characteristics to look for when trying to tell them apart.