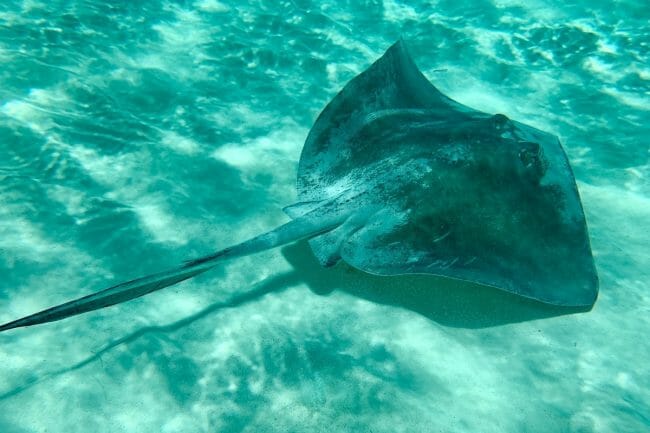 It’s no rare occurrence for surf anglers and anyone fishing around coastal areas to hook something that they believe to be a large trophy fish of species like mackerel, redfish, or some of the other more popular saltwater variations.

Once they get their catch closer to the shore, they realize that it’s just a stingray. Most anglers will simply remove the hook and discard the creature back into the sea, but some ask the question ‘are stingrays good to eat?’

They are commonly found along virtually any coastline throughout the world and some stingrays can grow to be massive in size.

The prospect of eating them might sound foreign to some, but it’s actually quite popular in some parts of the world.

Many anglers who have eaten stingray say that its taste can be compared to that of shark or some other sea creatures.

In this article, we will explore whether or not stingrays are good to eat and cover everything you should know regarding how to prepare and cook them.

Are Stingrays Good to Eat?

Stingrays have a reputation as being one of the more mysterious animals in the ocean. They certainly have one of the most unique body shapes of any other creature and some stingray species are known to be dangerous as they can strike with their tail and hurt people.

One of the more famous instances in which a stingray attacked someone happened off the coast of Australia when a large stingray fatally attacked famed explorer and television host Steve Irwin.

Most stingrays are not dangerous, but it is important that you are aware of the few species that can do you harm. If you’re able to catch one and safely get it into the boat, you might want to keep it and prepare it in one of the different ways we will mention later in this article.

The question of whether stingrays are good to eat can only be answered by those who have actually tried eating them.

Their flesh is not as desirable as some of the more popular fish species, but stingrays do offer a very unique texture and flavor that some people like. The majority of a stingray’s body, however, is not something you would want to eat in most cases.

Their flesh can sometimes be very rubbery and it also contains large amounts of cartilage that is very difficult to remove. However, if you know how to properly clean and prepare the stingray, you can get quite a bit of meat from it.

Stingrays are one of the most recognizable fish in the entire ocean. Their distinct body shape and structure feature large, flat wings that have pointed ends. They are also know for having a long tail that, in some species of stingray, is equipped with a sharp barb that can become extremely dangerous if you get too close.

Stingrays live in virtually every part of the ocean where the water is mostly mild throughout the year. You won’t find them in the frigid waters of the northern Arctic or in the seas surrounding Antarctica.

Stingrays have a set of eyes that are situated on the top of their body towards the front and their mouth is located underneath. These fish often have sharp, pointed teeth in some cases, but are mostly known to have round or flat molars.

There are more than 200 different species of stingrays that live in the oceans and some are even able to swim up into freshwater rivers and lakes.

Stingrays are often caught by anglers using a rod and reel and fishing for other species, and many fishermen and women look at the species with disdain as they seem to be nothing more than a nuisance on the water.

However, in other parts of the world, stingrays are a common menu item at many eateries and they are prepared in a number of ways.

Most stingrays are found in the coastal areas near the shore instead of out in the open waters.

There are a select few species that live in the open ocean and are known to grow to incredibly-large sizes, but the largest stingray that’s ever been caught with a rod and reel was landed on the Mae Klong river in Thailand in 2015. It’s wingspan was an astounding 14 feet and the fish weighed nearly 800 pounds.

Can You Eat Stingrays?

Eating stingray meat is a common practice in countries around the coast of Asia such as Singapore and Malaysia.

There are no species of stingray that are known to be harmful for us to eat, so you can keep and cook any size or type of stingray you want. Many anglers say that stingray, when cooked the right way, can be more tasty than most other fish species they are targeting.

Also Read: Can you Eat Marlin?

There isn’t much meat on stingrays that is suitable for consumption. Most of the stingray’s flesh besides the wings will be very rubbery and not quite what you want when it comes to texture or taste.

However, the flesh surrounding the mouth on the underside of the stingray, as well as the wings are parts that you should keep as they can be cooked in a variety of different ways.

While the flesh of stingrays have been described as tasting much like sharks or having a slightly similar feel and texture, these unique fish don’t have the same high levels of mercury that sharks possess.

Stingrays are not known to have dangerous levels of mercury, so you’re safe to eat them in any amount you want, as frequently as you want.

They are known to live to be roughly 5 or 10 years old, which means they are nowhere near living to be as old as sharks and other ocean creatures that are capable of living to be as much as 30 or 50 years or more.

There is usually a correlation between how old a fish can be to its mercury level as fish are known to collect mercury in their flesh throughout their lifetime.

Believe it or not, stingrays are actually said to be one of the better-tasting creatures you’ll find in most coastal regions.

Their taste has been compared to that of sharks, scallops, or even lobster as it has a somewhat salty tinge that isn’t overbearing and can actually be quite pleasant when cooked with the right spices or other elements that help to bring out the natural flavor of the creature.

It’s typical for people in the ocean villages and cities of Asian countries like Malaysia and Singapore or Thailand to catch and prepare stingray flesh with certain elements like spicy sambal sauce or even soy sauce.

There are numerous ways that stingrays are prepared in different parts of the world and you can find countless recipes online that point to the use of certain spices and other flavorful items that you can use to cook stingray with.

How to Cook Stingray

There are a number of ways most anglers catch stingrays, such as by rod and reel or even through spearfishing, which is very common in parts of Asia.

The methods of preparing the stingray typically include grilling them, but they can be sauteed or even fried depending on your preference. It’s important that you properly clean the stingray in order to take as much of the meat as possible.

Since stingrays are nothing like the average fish, anglers might be unaware of just how to clean them after they’ve been caught. There are plenty of videos online that provide detailed instructions on the best ways to clean stingrays, as well as the many different ways they can be cooked.

For people in the United States who commonly enjoy stingray, they are known to cut them into small strips and fry them in a pan with oil and breading.

They can also be broiled at a low or medium level and combined with citrus fruits like lemon, as well as parsley and paprika for a desirable flavor.