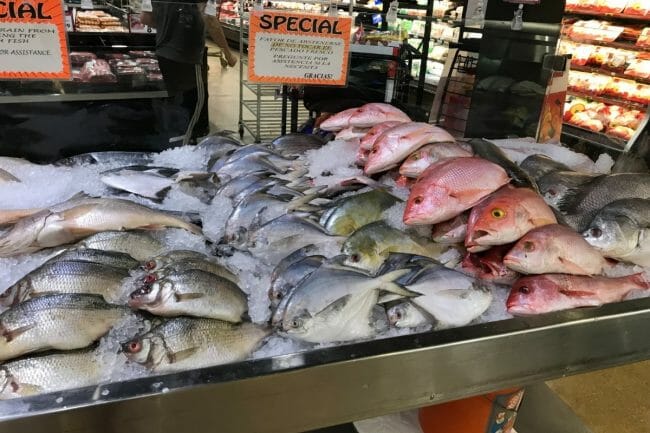 Florida is easily one of the top destinations in the United States where anglers flock to each year to catch a number of popular fish species that can be found in the coastal waters surrounding the state.

There are huge varieties of fish along the coast of the Sunshine State and you really never know what you might catch when you drop a hook in the water.

Anglers can catch a wide range of game fish species from the surf, but to go after the state’s most prized fish species, you’ll need a sportfishing boat that can travel at least 10 miles away from the coastline.

Once you get out to deeper waters, you can find reefs, shipwrecks and other areas that are home to abundant numbers of fish in every variety.

Many charter captains know exactly how to target the most sought-after fish in these waters, but you can also have quite a bit of luck fishing from your own boat as long as you have the right electronic equipment to put you in the best spots.

If you’re planning a trip to the Florida coast and are wondering what species is the best Florida fish to eat, you’re in luck.

We’ve compiled this article based on our own experience and the feedback from anyone who has enjoyed any of the state’s saltwater fish as a culinary dish.

Here are our picks for the top 5 best-tasting fish to eat in Florida.

Our favorite fish to eat from the Florida coast is grouper, although you might hear others say differently.

These fish might not be the most beautiful-looking species along the coast of the Sunshine State and they can often look downright ghoulish in some cases. However, when we’re talking about the overall best-tasting fish you can catch, it’s hard to beat grouper.

Their appearance might vary in size and color as there are lots of different species of grouper you can catch off the Florida coast.

At certain times of the year, you can venture out to the reefs and other areas where they are known to congregate and feed in large numbers and catch your limit of grouper within a very short amount of time.

Grouper has a very light, pleasant taste that’s somewhat sweet and pair’s perfectly with the right spices and flavor elements. They can be filleted and eaten in a huge variety of ways and you can expect to find grouper at the top of every seafood restaurant’s menu in the state of Florida.

They have an abundance of meat on each fish and the most popular variety of grouper are the gag grouper, red grouper, black grouper, speckled grouper, and snowy grouper. These fish can grow to immense sizes and the Goliath Grouper can reach freakishly-large length and weight in some cases.

Every summer, anglers from all over the United States, and the rest of the world, travel down to the state of Florida near the middle of June as this marks the beginning of snapper season.

Good luck finding a fishing charter that isn’t booked well in advance for the dates ranging from mid-June to August as there will be anglers fighting to get a spot on a boat and load their cooler with the coveted red snapper.

There are other varieties of snapper you can catch along the Florida coast in the Gulf of Mexico, as well as the Atlantic coast, but it is red snapper that is king among these particular species of fish.

You typically have to travel a few miles away from the shoreline to have the best chance at catching snapper as they are known to reside in deepwater reefs that are at least 100 feet in depth or more.

Snapper filet meat is more soft and sweet-tasting than almost any other fish you’ll find swimming around the Florida coast and you can enjoy it grilled, fried, or cooked in a huge variety of other methods, especially in fish tacos. It’s best served with a slice of lemon or orange as the citrus juices help to enhance the fish’s naturally sweet flavor.

The coast of Florida is teeming with red snapper due to the fact that they are under strict federal protection that limits each angler to only keep two red snapper per day.

However, you can easily catch a limit of vermillion snapper or white snapper in the same waters and these fish are known to taste very similar to their larger cousins with reddish scales.

Next on our list is one of the most visually striking fish you’ll find along the Florida coast. The mahi-mahi, also called dolphin fish, is a species that most serious saltwater anglers have on their bucket list to catch.

This is mostly because the fish has a vibrant greenish-yellow coloration that seems to become more prominent the longer they are kept out of the water. Every now and then, an angler will catch a blue mahi mahi, which is quite rare and considered a trophy by anyone’s standards.

These fish are found in virtually every seafood restaurant in the Sunshine State and they are also among the more pricey fillets since anglers have a tougher time catching them compared to others.

The mahi mahi is one of the most common species whose fillets are used to create the famed fish tacos that is a must-try for anyone visiting the state of Florida.

Their meat tastes very mild and sweet, which is more preferable to anyone who doesn’t like a very fishy smell or taste coming from their meal.

They often taste best when blackened or cooked as ‘goldened’ fillets. You can also fry and grill them with the same combination you might normally use for any other highly-prized Florida fish.

The next fish on our list is one that’s described as more mysterious than any other species you might find along the Florida coastline.

These short, stocky fish have very dark coloration and get their name from their unique tail that is flanked by large fins directly on either side, making it appear like the tail has three separate parts.

Tripletails are harder to catch than any of the fish we’ve already listed, but most would argue that they taste better than grouper or snapper when prepared and cooked properly.

The main reason we’ve decided to place them at our No. 4 spot is simply because it is a bit harder to catch and not very many people will have the opportunity to try it unless you’re an avid Florida angler.

Their meat is described as more firm and flaky than most of the species we’ve already mentioned, but it offers an intense flavor that will pique anyone’s taste buds.

Since their fillets fit very easily in most pans, they are often pan-seared with a variety of different flavor additives, although it is recommended that the key to cooking and enjoying tripletail is to remember that ‘less is more’ when it comes to seasoning and spices.

Another fish species that you won’t have any trouble finding in Florida restaurants is flounder.

These are one of the more peculiar species that are found along the coast of the Sunshine State and many anglers relish the chance to fish for them as they require serious skill in order to catch them.

Flounder are most commonly found along the shallow coastal waters very close to shore during the warmer months out of the year, but will move away toward deeper waters in the winter where they will spawn.

They are certainly not the prettiest fish and have a somewhat freakish appearance compared to others on our list, but don’t let their looks stop you from trying this outstanding fish filet.

Their meat is described as being very tender and white and is capable of being cooked in a wide variety of different ways to allow you to best enjoy their flavor.

The filets will usually flake very easily, so it’s important that you don’t overcook flounder meat.

Also, keep in mind that these fish offer a naturally sweet and pleasant taste, so there’s really no need to overload it with abundant quantities of spices.

Simply add some citrus juices and slices to the filet in order to enhance the flounder’s already-sweet flavor and enjoy.

We could continue this list with at least a dozen or more species that we highly recommend you try when taking a trip to the Sunshine State, but our top 5 choices are likely to please anyone who enjoys a good seafood dish.

If you plan to sample these different species at any Florida restaurant, you’ll have plenty of different methods which you can have them cooked and prepared.

If you plan to target these fish yourself and cook them at home, be sure to look up some of the many online videos and articles that will help you get the most out of these fish fillets as catching them is no small feat.

There’s nothing like enjoying your catch as a freshly-cooked dinner at the end of a long day of offshore fishing.