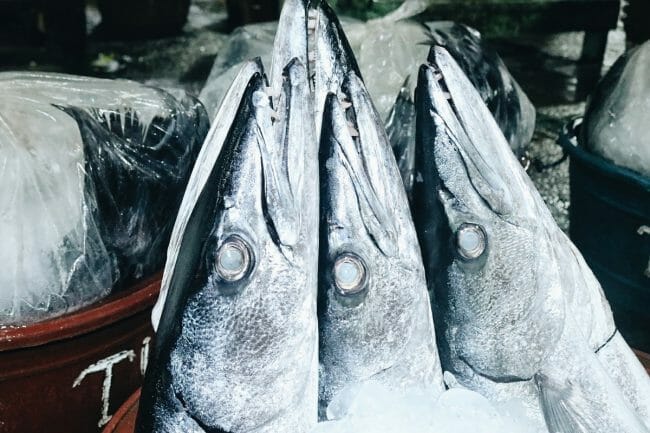 Barracuda have a reputation as being one of the most ferocious fish in the sea. This might be due to their gnarly appearance which includes long, pointed teeth and a very large mouth.

Many anglers unintentionally catch barracuda when they are targeting other fish species in the open ocean. It’s understandable for most to pose the question ‘are barracuda good to eat?’

You might not initially think of eating barracuda since their bodies are long and slender with less meat than most of the other sportfish species you’ll find while offshore fishing.

They are not a common menu item at many seafood restaurants around the world, but you actually can eat barracuda. Instead of simply discarding the fish back into the water, you could choose to keep it and cook it along with the other game fish species you’re going after.

In this article, we will cover everything you need to know when it comes to catching, cleaning and cooking barracuda.

Are Barracuda Good to Eat?

Barracudas are known to be one of the more aggressive predatory fish in the ocean, most anglers view them as a nuisance that tends to find their hook when the angler is hoping to catch other species of fish.

However, there are many anglers who specifically target barracuda and relish the opportunity to catch them since they fight more vigorously than most other fish you’ll find offshore.

These fish are very edible and some anglers actually enjoy catching and cooking them with the right method and recipe. As a predatory fish, barracudas do have quite a bit of toxins and mercury in their flesh, as you might expect.

Some of the smaller species of barracuda will not contain as many toxins at the same level a very large, mature barracuda might.

Instead of throwing them back, they make use of these apex predators and cook them in a way that allows people to avoid consuming too much of the harmful toxins that might be in the meat.

What is a Barracuda?

Barracudas have a long, slender torpedo-like body that allows them to swim at extremely fast speeds and chase down a variety of different fish that they prey on. They have two dorsal fins and a very large split tail.

The lobes of their tail are long enough to reach water that is undisturbed by their body while the fish is moving through the water. This unique design helps to give them their blazing speed and precision, which they use to target and devour many other, slower fish species.

Barracuda have one of the more frightening appearances of any fish in the ocean besides sharks. Their large, angry-looking eyes and long, toothy mouth can make them seem like an extremely dangerous fish that you would certainly want to avoid while swimming in the ocean.

They are known to attack humans, but such cases are extremely rare and almost always result in the victim being bitten once before the fish swims away.

There are about 20 different species of barracudas known to exist throughout the world. They mostly inhabit tropical waters that stay warm for the entire year, but will sometimes venture up into more temperate waters around the North Carolina coast and as far south as the tip of southwestern Africa.

Their diet consists of other fish, which is one of the main reasons why barracuda might have higher levels of toxins. The barracuda will consume huge amounts of various fish species over the course of their life, but will also often pick up certain toxins that can be extremely dangerous for humans to eat.

Can You Eat Barracuda?

It is safe for humans to eat barracuda, but there are specific things that you should pay close attention to before doing so. As we mentioned above, barracuda are a predatory fish that consume lots of other fish.

In the process of eating so many fish, they will be impregnated with certain toxins that are harmful to us if eaten. If you are planning to eat barracuda, it’s a good idea to target the smaller ones as they will have less potential to have various toxins.

There are many different cultures around the world that view barracudas as a prized fish that are commonly eaten. These cultures know that it’s not a good idea to consume large amounts of barracuda, or to eat the larger of these species.

Also Read: Can you Eat Marlin?

There are certain things that should be taken into consideration and specific ways that barracuda should be cooked if they are to be enjoyed properly.

Unlike most other sportfish species, barracuda are not known to be a fish that you can eat raw in the form of sashimi or sushi. In doing so, there is a serious risk of ingesting meat that is tainted with ciguatera, which is a toxin that’s commonly found in larger predatory fish that consume lots of smaller fish.

To avoid this dangerous toxin, as well as the potential for consuming mercury, people who commonly eat barracuda only take in small portions of their meat.

There is a very real potential to encounter food poisoning by eating large amounts of barracuda or especially consuming it raw, but if you cook and prepare it safely and properly, it can be safely enjoyed.

We’ve already noted that barracuda are another species of fish that are well-known for having high levels of mercury in some cases. Like most other predatory fish, barracuda consume large amounts of fish and, in doing so, often take in various toxins that can be dangerous for humans to eat.

Barracuda can live to more than 12 or 14 years in some cases and are capable of growing to more than 5 feet long and sometimes over 100 pounds. The barracuda that live long enough to grow to such sizes will almost certainly carry more mercury and other toxins in their meat.

Also Read: Can You Eat Tarpon?

This is the reason why many cultures who do consume barracuda typically cook only the smaller of the species that are generally less than 3 feet.

It’s also crucial to avoid eating barracuda in regions where they are known to have higher levels of mercury.

For those who generally prefer the taste of fish that offer a stronger flavor, barracuda is often preferable. When cooked properly with the right spices and other elements, barracuda can have good taste.

Most people prefer to cook barracuda with any number of strong spices such as peppers, garlic, dill and others.

By cooking them in the right way, barracuda can offer as much taste as some of the more popular game fish species like wahoo, amberjack, tuna and others.

How to Cook Barracuda

Barracuda can be prepared and cooked in a variety of methods. Barracuda steaks are a very popular menu item in South Africa and other areas where these fish are known to thrive. Barracudas are very lean and their meat is known to spoil more quickly than other species of fish.

The most common method of cooking barracuda is to cut them into steaks and use butter and oil to cook in a pan.

This is generally preferred as it is the easiest way to add the various spices that are needed to compliment the meat’s taste. Through this method, you can also choose to marinate the barracuda steaks in a variety of different combinations.

Frying barracuda is also very common and is a favorite method of people around the Caribbean and the southeastern United States.

The meat doesn’t have much fat, which means it will stay intact while it’s fried in a light batter. The meat can also be cooked in a stew or steamed with any combinations of vegetables for a protein-packed healthy meal.