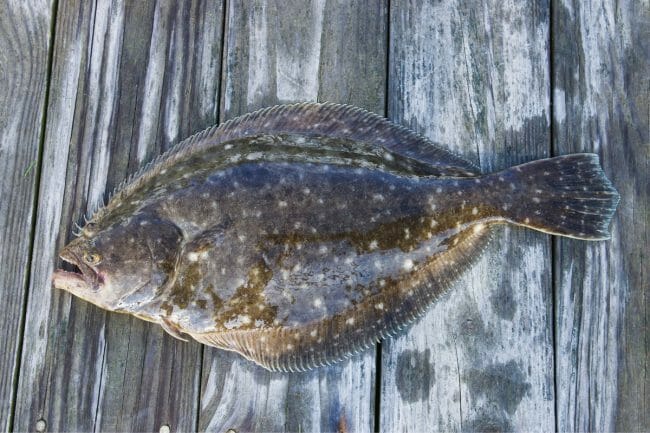 Flounders are one of the most popular saltwater fish species in the world for a variety of reasons.

They are known to be one of the easiest fish to target, but require a certain level of skill and dedication to entice a bite out of in most cases.

Flounder are mostly found in the shallow waters around coastal areas along the North and South American continents.

Most experienced flounder anglers prefer to start their search for these elusive creatures with a series of jigging techniques that might help them locate specific areas that are considered hotspots for flounder.

These include virtually any type of drop-off that might be as much as one foot, but this can often be a great location for flounder.

Flounders are known to utilize these ledges in a way that lets bait fish and other prey fall or swim off the ledge and become susceptible to being picked off by the stealthy and highly camouflage flounder who are known to bury themselves down into the sand and lie in wait for their meals.

In this article, we’ll cover the topic of jigging for flounder and take a closer look at why this is widely considered by many anglers to be the best way to locate and catch these tasty fish.

Where to Catch Flounder

According to expert flounder anglers, jigging for flounder works best in areas where there are the slightest drop offs or ledges.

Like any other predatory fish, flounder will use their surroundings to create an advantage that helps them surprise their prey.

Ledges and drop offs are the ideal areas for flounder to sit and patiently wait for small bait fish to swim just too far over the edge and into striking distance of the jaws of the flounder.

As anyone with a limited amount of flounder fishing experience might expect, you can usually locate an area that’s rife with flounder activity by searching out “flounder tracks” or areas of sand and silt that have recently been depressed by a flounder.

These tracks are best visible at low tide as most anglers can walk the shoreline and spot locations where flounder commonly post up and feed on smaller fish and other prey.

Another way to spot the ideal location for jigging for flounder is to cruise the shoreline in a flounder boat and look for these tracks.

Experienced flounder fishing guides are usually very skilled at this and will have their own secret ‘hotspots’ where flounder can be found at certain times of the year or the tide level.

When to Fish for Flounder

Flounders are a unique fish in that they can typically be caught throughout much of the year in the same relative locations. They are known to be much more active during the warmer months of spring and summer and typically move throughout the day and night in search of food.

Most flounder fishing enthusiasts know that the best time of the year to catch these types of fish begins around the middle of October and lasts until December in most areas of North America.

This is mainly due to the fact that the cooler water temperatures cause these thin, shallow water species to stop moving as much, which makes them much easier for anglers to target in most cases.

Flounders are known to pile up around the mouths of estuaries along the coast in the early morning and late evening hours.

This is a tactic they use to position themselves in an ideal location for catching unsuspecting bait fish, shrimp, and other potential meals.

Most anglers look for areas near grass beds, points and other types of formations that are home to other predatory fish that are looking for an easy meal throughout the day.

Flounder fishing is also a great activity to be done at night as these fish are sometimes more active after the sun goes down in most parts of the world.

How to Jig for Flounder

The best way to jig for flounder is to start with a small jig that’s about ¼ ounce option and use it to methodically probe the bottom along areas where you expect there to be a hungry flounder waiting on a meal.

You won’t need a heavy saltwater jigging rod when fishing for flounder as the tackle will be too light and the jigs too small.

Instead an inshore fishing rod with a fast action will work best.

The areas where you have found flounder tracks in the past or expect there to be flounder nearby are always worthy of further investigation.

Experienced flounder anglers always recommend that you fish an area thoroughly as a jig can sometimes come within just a few feet of a flounder, but may not be taken seriously.

This doesn’t necessarily mean that jigging is not the right technique to use at any given time, but that it can be one of the most productive means of catching flounder when used properly.

As we’ve already noted, drop offs should be especially productive flounder habitats and anglers should position themselves in a way that allows them to work their jig across the ledge, letting the lure fall off the edge, however deep it may be.

It is usually just as the lure drops or shortly after it reaches the bottom of the other side of the drop that the flounder will attack it and often inhale the jig before taking off.

Most anglers utilize a ‘fan’ technique when fishing an area that involves casting their lure across a wide swath of water and working it steadily along in order to avoid missing any potential bites.

Jigging for flounder involves simply bouncing the lure across the bottom at various intervals as you probe the area for fish.

The fan technique is most common when anglers don’t have a solid visual on some flounder tracks, but when you do happen to notice the outline of a flounder hidden under the sand, you can alter your approach and target the fish in a more direct way.

This is typically referred to as sight fishing and is known to be a highly effective means of producing a bite, especially when you’re using some type of natural bait along with your jig.

One of the best things about jigging for flounder is that these fish are not picky. They tend to strike at almost any type of jig, often the smaller style jigs being better than larger versions.

Anglers have been known to catch flounder on bucktail jigs, paddletail jigs, shrimp jigs, and a variety of other styles at various times of the year.

Jigging for Flounder from a Boat

As you might suspect, flounder fishing is almost always best done from a boat as this will allow you to position yourself in a way that truly utilizes the drop offs, ledges and other areas where flounders are known to hang out. It also allows you to cover more water as you fish for flounders.

Jigging for Flounder from the Shoreline

Flounders are one of the few types of fish that can be caught from both a boat, or standing along the shoreline.

Many experienced anglers find that they can more easily sneak up on larger flounder when fishing from the shore as they sometimes recognize the shadows cast by a boat, or the telltale whirring sound of the trolling motor.

If you’re fishing from the shore, be patient and work the area thoroughly to probe for any flounder that might be hidden from your view.