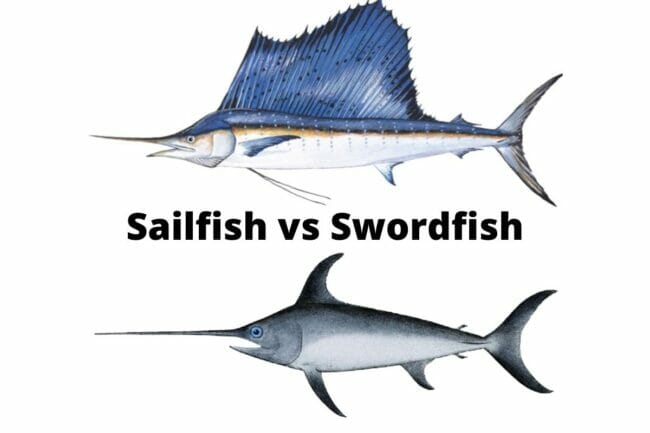 Sailfish vs Swordfish what’s the difference and how do you tell these spectacular giant fish apart?

Many anglers consider sailfish and swordfish to be among the pinnacle of sportfishing species for a number of reasons.

They are two incredible species that both belong to the Billfish family and are distinctively different from most other game fish species in ways that make them prime targets for sportfishermen.

Their appearance shares the same torpedo-like body that’s lean and muscular—built for speed and power, as well as a translucent-blue coloration and a notably-long bill.

These similarities cause a lot of anglers to ask the same question:

How do you tell them apart?

In this article, we’ll discuss these differences and how you can be certain in identifying both species of fish.

Differences Between Sailfish and Swordfish

The main differences between sailfish and swordfish is that swordfish grow to a mush larger size as adults, have pointed dorsal fin and have a bill that is a large as half a body length.

Sailfish and swordfish share so many similarities between one another that even the casual angler might not be able to fully tell them apart.

They both have bodies that are remarkably similar in shape and build, as well as other things about these fish that make it evident that they have a lot more in common than they do in contrast to one another.

The Billfish family includes swordfish, sailfish and marlin species, which all have a long, pronounced bill. There are, however, a few distinct features that any angler with a keen eye for detail should be able to spot if they are carefully looking for them.

First, the size difference is the most common way anyone can tell a sailfish from a swordfish. Due to their massive size, a full-grown swordfish is going to be much larger than a mature sailfish. That’s not to say that sailfish are a small fish species, by any stretch.

A full-grown sailfish is known to be capable of growing up to 200 pounds and can measure roughly 10’ in length.

There is a marked difference in the sailfish that inhabit the Atlantic ocean and those that are found in the Pacific and Indian oceans.

The world record weight for Atlantic sailfish is 142 lbs while the largest-known Pacific variety is 221 lbs. In either part of the world, the average size of a sailfish is typically 50 pounds and a number of specific factors must be present for them to grow past the 100-lb mark.

It’s quite common for swordfish (sometimes referred to as “broadbills”) to reach 200 lbs in both the Indo-Pacific ocean, or the Atlantic waterways. With a healthy diet and the right conditions, swordfish have been known to exceed 1,000 lbs in different locations throughout the world.

In fact, the IGFA world record swordfish catch tipped the scales at an astounding 1,182 lbs in 1953 off the coast of Chile. Swordfish are also much longer as well, with many trophy specimens stretching up to 14’ in length.

While it’s fairly simple to tell the difference between a mature swordfish and an adult sailfish, what if you catch one that’s around the 50-lb mark?

There are some telltale features that both swordfish and sailfish have that allow anglers to easily tell them apart from one another.

The most obvious difference in both sailfish and swordfish are the fins on each species. Swordfish have a dorsal fin that very closely resembles the distinct dorsal fin of a shark. It has a tall, upward-pointing shape that is in contrast to the uniquely large fin of the sailfish.

Sailfish have a very long, wide dorsal fin that, when stretched out underwater, looks almost like a feather compared to the sharp, crescent-shaped fin of the swordfish.

When the sailfish’s dorsal fin is fully-outstretched, it’s actually greater in width than its body. Suffice to say that there is often no mistaking a mature sailfish compared to an adult swordfish simply based on the dorsal fin size and shape.

The bill of the swordfish and sailfish are also another point of difference. The sailfish’s bill is long and distinct, but it’s only about a quarter of the length of its entire body for the majority of mature sailfish.

A swordfish, on the other hand, has a much longer and more broad bill that it actually uses to slash at prey and even attack predators like sharks.

Swordfish bills are often half as long as the fish’s body and can be dangerous to anglers who aren’t well-versed in handling them. A fishing boat captain was reportedly killed in 2015 after being stabbed by a swordfish when he jumped into the water.

One of the most common things avid anglers use to distinguish a swordfish from a sailfish is to look at its eyes relative to the size of its body.

A swordfish’s eyes are usually much larger than the eyes of a sailfish, which goes along with nearly everything else about swordfish being bigger than sailfish.

Swordfish are larger and often have to hunt prey that live in deeper waters than the sailfish. This means their eyes must be larger and capable of taking in more light when swimming at extreme depths in search of a potential meal.

The average angler might not be able to tell the other differences between the appearance of a swordfish vs a sailfish, but dedicated fishing guides and avid offshore anglers are likely well-aware of such differences.

One of the main contrasts swordfish have compared to sailfish is in their scales. A swordfish will eventually lose its scales as it grows into maturity, leaving it covered with a smooth, silvery-colored skin.

A sailfish will have large, V-shaped scales across its body that remain intact throughout its entire lifetime.

Sailfish and Swordfish and Populations

Both sailfish and swordfish can be found throughout much of the world’s oceans in temperate waters where there is an abundance of other fish species for them to prey upon.

As mentioned above, swordfish are larger and typically swim down to greater depths than sailfish, but both species are pelagic fish, meaning they are capable of swimming and thriving in virtually every section of the water column, except the extreme depths near the bottom.

It’s known that sailfish are usually found in warmer waters that are generally above 70 degrees Fahrenheit. They mostly don’t venture into the exceedingly warm waters around the equatorial regions and sailfish tend to avoid waters that are hotter than 85 degrees in most cases.

Since swordfish are larger and built to handle deeper water, they are often known to thrive in water that’s anywhere from about 40 degrees to 80 degrees Fahrenheit.

It’s actually quite common for swordfish to hunt prey in very deep waters that are more than 2,000 feet deep. Scientists have extensively studied how swordfish are capable of hunting and existing at such depths for long periods of time.

It’s known that they have an organ in their head that actually maintains heat in their eyes and brain, which allows them to swim and hunt at such depths.

Sailfish are known to swim down to about 600 feet in most areas of the ocean. Their smaller size and features are simply not well-adapted to the cold waters, but they avoid the deep, mostly, because they are less of a predator and more like prey at depths beyond 500 feet.

Fishing for Swordfish and Sailfish

Many dedicated offshore fishing enthusiasts spend large sums of money and travel many miles to catch swordfish and sailfish in various parts of the world.

Both fish species are said to be among the most incredible when it comes to breaching the water’s surface and performing a number of aerial stunts in an effort to free themselves from the hook.

Anglers typically catch sailfish by trolling with a variety of different types of lures at or near the surface. Since these fish live most of their lives in the upper portion of the water column, it’s somewhat rare to catch them when fishing with deep rigs.

Swordfish are caught mostly using deepwater techniques that involve drifting with weighted rigs. These fish are virtually built for power and speed and are said to be second to only blue marlin when it comes to the most challenging fish in the world to land with a rod and reel.

Taste of Both Species

Both of these Billfish species are common among sportfishing anglers, as well as seafood menus throughout the world.

Swordfish and billfish are said to be better-eating species than marlin, but they both have what some might refer to as a “fishy” taste compared to other saltwater species.

Sailfish are known to be more mild in most cases, but can have a strong taste depending on the fish’s diet. Swordfish have a less delicate texture and often require a specialized preparation and grilling to avoid the fish having a strong taste.

The main differences between sailfish vs swordfish is that swordfish grow much bigger, have a shark like pointed dorsal fin and have a much longer and wider bill.