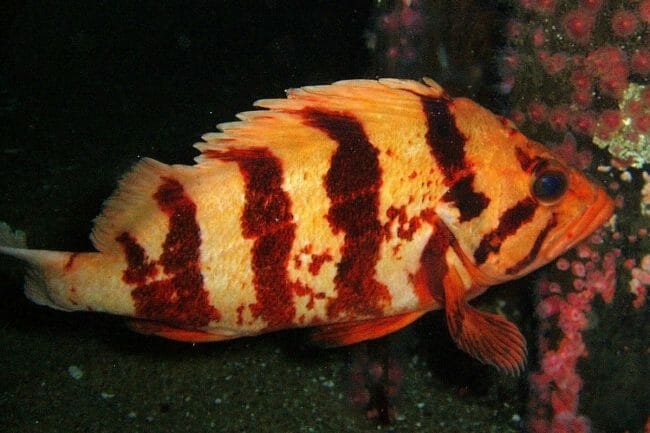 Rockfish are a bottom-dwelling fish that can be found hiding amongst the cover of natural and artificial reefs and other structures deep in the ocean.

There are many different variations of rockfish, including Vermillion Rockfish, Quillback Rockfish, Goldeneye Rockfish, China Rockfish, Blue Rockfish and many more.

Known to stay close to the bottom of the ocean’s floor, rockfish are often caught by deepwater angling techniques that target fish that are known to take cover deep in the crevices of reefs and other underwater structures.

Many anglers find that rockfish don’t put up as much of a fight as other types of saltwater game fish species like mackerel, snapper, grouper, and others.

This is mainly due to the fact that they are often caught in very deep water and their air bladders expand while they’re being reeled in, rendering them unable to move.

They can often be found in schools at or near the bottom, so jigging is a highly popular method for catching rockfish throughout much of the world, especially in the Pacific Ocean.

In this article, we’ll take a closer look at everything from where to use a jig to catch rockfish to what kinds of jigs are best for catching rockfish.

Where to Catch Rockfish

There are several dozen types of rockfish found in the ocean across much of the world. The key to catching rockfish is to stick close to cover since they are considered to be one of the ocean’s most well-known ambush predators. The best place to look for rock fish is around—you guessed it—rocks.

Most rockfish will find a spot deep inside the crevice of the rocks, but there are some species of rockfish that dwell over the top of rocks or reefs under the ocean.

Being snagged while jigging for rockfish is just part of the game and should be expected if you’re fishing near cover for extended periods of time.

Rockfish are generally found at depths of at least 120 feet down to as much as 350 feet in most cases. This makes jigging for rockfish more of an art form than anything else.

However, while some of the most skilled rockfish enthusiasts out there will commonly fish at depths below 250 feet, rockfish can actually be caught as shallow as 50 or 60 feet in many cases.

It’s often recommended that young anglers start out fishing in depths of 60 feet and work their way down to the 250-foot mark as it can require quite a bit of skill to avoid being hung up at such great depths.

When to Fish for Rockfish

Rockfish are known to be deep water creatures, making them less susceptible to the changing weather patterns of fish that are typically found closer to the surface.

However, most rockfishing experts agree that the fall is perhaps the best time of the year to catch the biggest rockfish for anglers throughout much of the world.

For anglers throughout the Pacific Northwest and near Alaska, rockfishing is best done whenever the weather allows it as strong gales and frigid temperatures can quickly soil a fishing trip to the best rockfishing grounds.

Anglers closer to southern California and parts of Mexico are able to enjoy temperate weather almost year-round, making rock fishing something they can enjoy any month out of the year.

Jigging for Rockfish and Boat Positioning

Jigging for rockfish is a delicate, yet deliberate method of catching this elusive species. For the most skilled anglers who know exactly where to look for rockfish, they can expect to find them hunkered down inside large swaths of rocky underwater cliffs and reef structures.

Positioning your boat in just the right place to target rockfish is as much of a delicate, time-consuming process as jigging can be.

Anglers must learn how to position their boats over the top of known rockfish whereabouts and have a solid understanding of the water currents and where they will drift in order to first gain a grasp of how to best utilize their time on the water if they intend to catch rockfish.

It’s best to position your boat at the point where you can expect to drift over the most rocky bottom and reef structures in one pass.

This will allow you to focus your efforts on working the jig in such a manner as to produce a bite.

If you select the wrong spot or find yourself quickly drifting away from the structure you need to be fishing over, you’ll have to spend valuable time getting the boat back into position once again.

How to Jig for Rockfish

The all-around best rig for jigging for rockfish is arguably a single-loop leader attached to a hook that’s roughly two feet above a metal jig at the bottom of your leader.

There are a variety of metal jigs that are capable of producing a strike from a hungry rockfish, so it’s important to try out a number of different colors if you find yourself not able to get a bite when you might otherwise expect to catch rockfish.

Most anglers prefer to bounce their jig along the bottom in order to mimic the motion of a curious bait fish as it feeds along the rocks and ocean bottom.

If you are fishing at deeper depths then the best jigging rods will purpose built for the job and should be capable of working a heavy jig setup 250 feet down.

For some of the most experienced fishermen and women, using a reddish brown colored jig is considered best for catching large rockfish species.

Be sure to not let the fast current produce too much slack in your line as this will undoubtedly cause you to miss strikes—especially at depths of more than 100 feet.

It’s often best to use a heavy jig that will drop straight down without much fluctuation. Some anglers prefer a more diamond-shaped jig when fishing in shallow waters, but there’s no need to get too caught up in styles as rockfish are not known to be a very picky fish. When they’re hungry, they’re biting.

Made sure your jig has reached the desired level you expect to catch rockfish at. Once you’ve reached the depth you want, simply work your jig up and down, whipping it in a manner that might seem to mimic a bait fish diving and swimming upward as it searches for small bits of food at such depths.

There’s no need to work the bait too fast. In fact, most experienced anglers will allow the jig to gracefully rise and fall in a nice, smooth motion. Some anglers even add a strip of squid to their lures to further entice the senses of a hungry rockfish.

There’s no need to get fancy when it comes to jigging for rockfish. Most species of rockfish will eat metal jigs that are painted to appear like a small bait fish with a noticeable eye.

The rapid vibration and flashing will usually be enough to bring a rockfish out of its layer and produce a strike.

It is important to note that most experienced anglers attest to the effectiveness of a bucktail jig in fishing for shallow-dwelling rockfish.

Bucktail jigs are typically lighter and allow the angler to produce a more enticing motion than simple metal jigs that are fixed with a treble hook.

Minnow jigs are a great choice for catching rockfish, but Norweigian cod jigs are also a hit in most areas of the world where rockfish are prevalent.

The sizes may vary, but jigging remains an essential method for catching these deep water trophy fish.