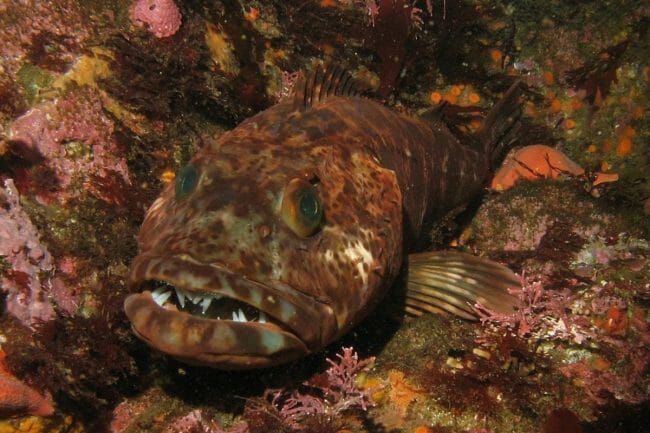 Lingcod are among the most voracious fish in the sea, seeking to devour anything that comes within reach of their deep water layer, hidden away among the rocks and crevices of reefs and other structures.

Anglers consider lingcod to be among the best table fare of any other saltwater species that can be caught around the shores of the Pacific ocean along the North American coastline.

They are one of the most peculiar-looking fish found anywhere in the world. Their bodies are long and muscular, with colors that range from deep browns and black to a sort of turquoise that is quite unlike any other species anywhere else.

They are the epitome of ambush predators, lurking deep within dark holes and recesses of rocky ocean bottoms as they wait for an unsuspecting fish or other creature to wander by.

Unlike other species of fish that anglers commonly target, the lingcod is not a social species, but rather prefers to be alone for much of its life outside the mating season, which occurs during the winter months of December through early March.

Jigging is one of the most popular methods of catching lingcod as this type of fish is known to aggressively strike lures and give anglers a stout fight, pulling hard from depths as low as 300 feet in some instances.

In this article, we’ll discuss the ways anglers utilize jigging to entice lingcod to bite their hooks and how you can sharpen your knowledge of this particular fish as it relates to jigging.

Lingcod like to emerge from the depths of up to 1,000 feet in mid-October to move closer to the shoreline in preparation to begin their yearly spawn.

The Pacific coast of North America is strewn with rocky craigs well below the ocean’s surface.

Lingcod are known to stick very close to rocky cover deep in the ocean, using their distinct color pattern to camouflage them from other predators, as well as prey.

Anglers who are well-versed in catching lingcod using various means of jigging know that these fish species can usually be found at depths of 60 feet or more during the cooler months in late autumn and early winter.

The best way to tap into the ambush predator’s mindset and take advantage of their own feeding tactics to use against them is to work a jig up and down along these rocky bottoms and drop offs near the coast.

Using a boat is essential as lingcod are much more easily caught from deep water areas than shallow.

However, catching lingcod on jigs is actually moderately productive if anglers are able to locate a steep drop off near the rocky shores of California and other areas that stretch as far north as Alaska.

When to Catch Lingcod

According to most expert anglers, lingcod are known to begin moving toward the shoreline in September and into October before settling in rocky outcrops and deep voids where they will spawn with their mates.

Once the female lays her eggs, she will depart in search of food while the males stick around to viciously defend the nest against all manner of predators.

For many days, the males will not eat much, if anything at all, opting instead to attack anything that comes within range of its giant mouth and razor-sharp teeth.

Once the eggs hatch and the fry begin to disperse, the males will look for anything it can find to eat.

With all of this taken into account, skilled lingcod anglers mostly agree that lingcod are prone to attacking jigs and biting virtually any time of the year.

Biologists believe that lingcod often bite their victims out of sheer aggression instead of hunger. They are one of the only fish known to indiscriminately eat their own kind at any given time.

If you are trying to narrow down a few months out of the year when jigging for lingcod is best, look to fish during December through May as these types of fish will be closer to shore and easier to catch than other times.

How to Jig for Lingcod

Remember, lingcod prefer to stay at or near the bottom in and around rocky structures deep below the ocean. This is especially challenging for any angler because it’s very easy to become hung up on the rocks in depths of well over 100 feet.

When this happens, anglers often have no other choice but to break their lure off and tie on another one. Doing this repeatedly can, as one might assume, become very frustrating and expensive.

The best way to jig for lingcod is to either fish with someone who is very well-acquainted with the structures below the water’s surface, or to utilize a detailed, state-of-the-art sonar system so that you’ll be able to see and understand what’s below you.

The main objective when it comes to jigging for lingcod is to find a spot above where you expect lingcod to be haingng out and allow your boat to drift by as you methodically work your jig.

Lingcod stay very close to the bottom in most cases, so you definitely don’t want to waste time trying to fish shallow areas very much.

Those who are skilled at jigging for lingcod prefer to allow their jig to sink all the way to the bottom and slowly whip it up and down, no more than about 6 feet from the ocean’s floor near rocky structure.

Jigging for lingcod is not very complicated, but it does require a significant amount of patience and determination. If you don’t get any bites on your first pass by a rock pile, try another location or use a different jig.

There are a wide variety of jigs that work to attract bites from lingcod. After all, it really doesn’t take much to trigger these ferocious fish to bite anything that comes their way.

Many anglers prefer to use metal jigs that are oblong and built much like a spoon. These work great throughout the year, as do Norwegian jigs and grubs or other plastic baits rigged onto heavy jig heads.

The main key is to allow your jig to sink down far enough to reach the lingcod’s layer before slowly and methodically working it up and down in order to mimic the movement of a curious, unsuspecting bait fish.

Some anglers swear by the practice of fishing with jigs for lingcod during times when the ocean swells might otherwise drive most anglers back to the safety of the shore.

The rhythmic motion of the ocean swells makes it possible for anglers to hold their rod still and allow the ocean’s own waves to do the work of gently pulling up before allowing your jig to sink down again.

Jigging for lingcod is arguably the most popular method of catching these feisty fish species for much of the year.

There’s nothing quite like catching large lingcod on a day when they are aggressively biting jigs. Using the basic tips from this article, you should be able to get a few jigs and hit the water.