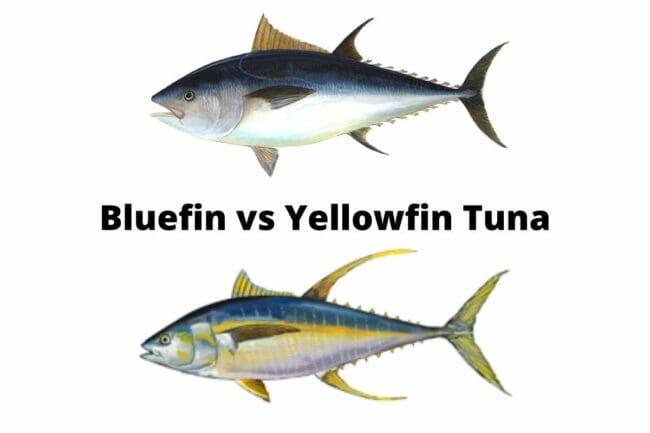 Tuna are one of the most prized sportfish species in the world. They present anglers with an incredible challenge in landing the giant fish, and also have some of the best-tasting meat of any other offshore fish.

There are various types of tuna, but the yellowfin and blue tuna are among the most sought-after by recreational and commercial fishermen.

Many anglers are not aware of the differences between bluefin vs yellowfin tuna. In this article, we’ll examine some of the features and characteristics of each type of fish, as well as some ways you can tell them both apart.

Tuna fishing has been made increasingly popular in the last few decades by sportfishing operations, as well as the popular television series Wicked Tuna.

If you’re a fan of the show and you’re wondering whether or not tuna fishing is really as intense as it’s often portrayed, the answer is a resounding “yes.”

Bluefin vs yellowfin tuna look, in many ways, virtually identical to one another. However, their habitat, feeding patterns and certain appearance characteristics are often what makes them quite different from one another.

Tuna operations are often among the most profitable types of commercial fishing ventures across the world. These fish grow to immense sizes and many commercial fishing companies, as well as professional guides and tournament anglers all use the same methods to catch these monsters that prowl the deep.

There are sections of the globe where bluefin and yellowfin might live together, but there are certain other portions which have either one or the other instead of a mixture.

Yellowfins generally prefer the more temperate waters around islands and near the coast and rarely venture out into the sections of ocean where the continental shelf doesn’t reach. They are not found in water that’s as deep as bluefins typically like to roam.

Bluefin are a bit more widely dispersed than their yellowfin cousins. These types of tuna commonly live in the upper Atlantic around the New England coastline all the way out to the coastline of France and Portugal.

They are also found throughout the Indo-Pacific oceans near the coastline of the Indonesian islands, as well as the lower North American and South American Pacific coastline.

Like the yellowfin, the bluefin will usually swim in deeper water that’s still above the thermocline. However, both species sometimes venture down to depths of 3,000 feet or more in some cases.

Most anglers typically fish for both bluefin and yellowfin in the upper portion of the water column using methods like trolling, jigging or chunking.

The tuna species is actually closely related to the mackerel species, but they are known for having much more bulk and muscle than most other types of fish. Let’s take a deeper look at the bluefin and yellowfin tuna species in more detail.

If you catch a relatively small tuna and you’re not quite sure whether you’ve landed a yellowfin or a bluefin tuna, there are a few tried-and-true methods you can use to distinguish one from another and be certain of your catch.

Yellowfin tuna have a very distinct yellow line that runs laterally across their body at about the eye-level and stretching back toward the tail above the pectoral fin.

Yellowfin tuna also have the same deep blue coloration on the top of their back, but they also feature light, white-colored vertical stripes that intersect this blue and yellow coloring.

The bluefin tuna is certainly worthy of its name and reputation as well. These fish have a very dark complexion on their fins that might actually appear more like a black color for some regions of the world.

Bluefins will obviously not have the distinct yellow lateral line that yellowfin feature, but their bellies do have a more noticeable silver sheen.

The bluefin tuna’s belly also has short, uneven vertical lines that run along the area where the fish’s widest point is between the fins. There might also be white-looking spots on the belly of the bluefin tuna that are not clearly noticed on the yellowfin species.

Another way that anglers might tell the difference between bluefin vs yellowfin tuna is to examine the fins more closely.

Aside from the fin color on either fish, the bluefin vs yellowfin tuna species’ fins have a few slight differences between them that make it possible to identify one species based on things like length and fin position.

The bluefin tuna’s pectoral fin is a bit shorter and less pointed than the yellowfin. This pectoral fin of the blue will not stretch past the back of the dorsal fin on the bluefin.

However, the yellowfin’s pectoral fin will be noticeably longer and will usually reach past the dorsal fin and is often long enough to stretch back overlapping the second dorsal fin.

A bluefin tuna’s second dorsal fin is a mixture of grayish-yellow. This yellow tinge is sometimes what confuses anglers as to the identity of the fish, leading them to believe that they have caught a yellowfin when it is, in fact, a bluefin.

The tail of the bluefin vs the yellowfin is another point of difference that is easily distinguished from the other. The bluefin’s tail is very often a dark blue color, but might sometimes appear as dark gray in some regions.

This contrasts to the yellowfin’s tail, which is more distinctly yellow in color and might have a slight grayish coloration. The shape and profile of both the yellowfin vs bluefin tuna’s tails are very similar in every other respect besides the color.

Both the bluefin and yellowfin tuna are capable of growing to massive sizes, but it’s the bluefin that is the true heavyweight species of the two. The average bluefin tuna usually grows to be about 4 or 5 feet in length and might weigh anywhere from 100 to 150 pounds.

It’s widely known that the Pacific variety of bluefin typically grow much larger and can reach as much as 8 or 9 feet and sometimes weigh well over 500 pounds.

The IGFA world record bluefin tuna weighed an incredible 1,496 pounds and was caught off the coast of Nova Scotia, Canada in 1979.

Yellowfin tuna are known to grow very fast, but they never reach the monstrous sizes that bluefin are capable of growing to. The average yellowfin tuna might be about 3 or 3’6” in length and they commonly weigh anywhere from 100 to 200 pounds.

The IGFA world record yellowfin tuna is noted as being a 427-pound specimen that was caught off the coast of Cabo San Lucas, Mexico in 2012.

There is no dispute that bluefin and yellowfin tuna are considered to be seafood delicacies as their meat offers a very desirable taste and can be prepared a number of different ways.

The size and composition of the bluefin tuna’s meat makes it more sought-after than the yellowfin, mainly because of the healthy levels of fat within the muscle tissue that make it much more flavorful.

Bluefin tuna are also known to have a very bright red-colored meat that tastes salty and rich compared to other types of fish. The brighter a bluefin’s meat is usually means that the fish’s fat content and flavor will be top-notch and will fetch a hefty price from buyers at the docks.

This is the main reason why tuna fishing is as popular with serious anglers who are willing to venture out hundreds of miles in search of these giant fish.

Yellowfin tuna are also tasty, but they offer a more lean type of meat that isn’t quite as high-quality as the bluefin. In either species, wild-caught tuna has an exceptionally better taste than farm-raised fish.

Tuna fishing is an incredibly exciting venture that is often well-worth the time and effort spent. Using these identification points, you should now be able to tell each species apart in the event that you catch one.