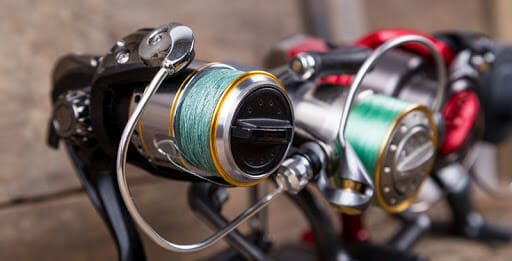 Inshore fishing gives you access to a large variety of fish species and fishing styles whether that’s using bait or working lures in and around structures or other features where fish are likely to be found.

Pairing the right spinning reel with a suitable rod with the correct power rating and action will allow you to make pin point casts especially on lighter setups.

Whilst a baitcaster may excel at casting larger lures long distances a spinning reel will normally perform better for closer range work or if using lighter lures or bait rigs.

Fishing reels need to be capable of standing up to the harsh environment that fishing in the sea imposes on your gear.

Salt is highly corrosive and can wreck the internal gears of a reel if it is allowed to penetrate the reel housing.

Although you could use a freshwater reel unfortunately they do not have the same level of protection from salt water.

The Stradic Ci4+ is Shimano’s premium spinning reel and it is not only one of the smoothest operating reels around it is also one of the highest sealed against the corrosive effects of sea water.

Shimano pulled out all the stops when designing the Ci4+ and have built one of the all time greats.

With the Stradic, Shimano boasts that the reel casing is twenty percent lighter than the traditional graphite that they use thanks to their carbon infused(Ci) technology.

That weight saving does not come at the expense of strength as you get a reel casing that is also one and a half times stronger and more rigid than traditional graphite.

Internally the gears and are made with Shimano’s Hagene cold forged steel process for increased strength over traditionally cut or machined gears.

Both the reel housing and the internal gears rigidity reduce warp and make for one of the smoothest operating reels ever, even when put under a lot of pressure.

For inshore fishing what really sets the Stradic apart from other reels is how well the drag housing has been sealed.

This is traditionally a weak point in spinning reels that would allow water to penetrate the reel and damage all of the internal gears and the drag system.

When Shimano originally released the Stradic they filmed working smoothly after being submerged in sea water for over a minute caused a lot of talk in the fishing world at the time.

Just like any good reel always rinse it after use in fresh clean water, this plus regular servicing should see your Stradic last many, many seasons of hard use.

Not the cheapest reel around but a sound investment for any serious inshore angler.

The Penn Clash is a smaller and more affordable version of the Spinfisher VI below even though it shares some of the technologies and build processes.

Yet it is definitely higher up the product line than the Penn Battle 2.

It’s quite popular as an inshore fishing reel and runs particularly smooth in comparison to some of the other brands top offerings.

The Clash comes with no less than 8 sealed stainless steel bearings and one anti-reverse bearing.

Just like the Spinfisher it also benefits from the usage of Penn’s HT-100 carbon fiber drag washers for a very strong drag system that remains constant through the full range of usage.

It has a full metal body and all the internal gears are machined using a CNC which results in really tight tolerances and a very sturdy reel with little or no warp when under strain.

Reducing warp in a reel makes a massive difference to how it performs and allows for the maximum amount of power to be transferred from the handle through to the bail system.

The bail has a slow oscillating speed which means when it lays line(in particular braid) onto the spool the line will lie in a more uniform manner which should result in a reduction of wind knots.

The Revo Inshore a better sealed version of the popular Revo series of spinning reels from Abu Garcia.

It is a beefed up version of the Revo that is built with to better handle the corrosive nature of fishing at sea.

Available in four sizes a 30, 35, 40 and a 60 with the smaller models up to the size 40 being suitable for inshore work and the 60 for more targeted work with larger species in mind.

The Revo range of spinning reels are know to be really good casting reels and the Inshore version is no different.

You get a machined aluminum braid ready spool which combined with the Rocket Line Management system lays your line down evenly on the previous layers of line allowing for a big reduction in backlashes and much better casting performance.

On the smaller 30 and 35 size models Abu have used their Insert molded C6(IM-C6) body design to help reduce weight for better all day use.

On the larger 40 and 60 size they have used an all-aluminum body for better strength and reduced body flexing which is often the cast with bigger reels.

A Carbon Matrix drag system ensures smooth operation even under very high loads when you are hooked into larger fish.

Machined aluminum internal gear and 6 corrosion resistant bearings make for a really smooth running reel even when under a lot of pressure from larger species.

The sixth model in the much loved Spinfisher series from Penn is one of the highest quality that they have ever designed.

Penn are well known in the sea fishing world in particular their line of offshore reels like the stunning Penn International, they also have a big presence in the spinning reel market with the Spinfisher, Clash, Fierce and the massive Penn slammer which is used for really heavy spinning setups.

The Spinfisher is their high performance reel for smaller inshore spinning gear and it is one hell of a workhorse.

From beach casting to shorter pier or sight casting over flats the Spinfisher can handle just about anything you can throw at it.

Just like the Stradic above the main selling point of the Spinfisher is just how well it is sealed and the internals are protected from water and grit/sand.

The drag is also considerably beefy and Penn use a number of drag washers to almost double the maximum drag.

The line starts at a 2500 and tops out at a size 10500, for inshore work however a size 3500 is ideal or a 4500 if you are throwing heavier lures or beach casting long distances as the extra capacity on the spool will be necessary.

The Saltist line of spinning reels from Daiwa have gained massive popularity anglers and now with the Back Bay LT they have adapted it for inshore use specifically.

The Lt stands for light and tough which is exactly what you need for all day casting when fishing inshore.

Both reels have a drag rating of 15 lbs and the 4000 model has a 30% or so larger line capacity than the smaller 3000, there is roughly about .7 of an ounce in weight difference between the two.

They have an all aluminum body, 6 + 1 bearings and a waterproof carbon fiber Magsealed drag system.

The Magseal does away with traditional washers or gaskets and instead uses a magnetized main shaft that is coated with MagOil Nanofluid which seals the reel extremely well but also makes it run really smooth.

Just like the Revo Inshore the Back Bay LT has a machined aluminum spool that comes braid ready so no need for monofilament backing.

Your safest bet when choosing an inshore spinning reel is to always stick to the top brands and their mid to high end reel offerings.

Although you can get away with a substandard rod a low quality spinning reel for inshore fishing is not going to cut it and you may well end up regretting such a choice.

Penn, Shimano, Daiwa and Abu Garcia all produce spinning reels that are designed specifically with inshore usage in mind.

All your reels should be thoroughly rinsed in clean fresh water so that any dried in salt on the exterior of your reel can be washed away.

Over time this salt can become very corrosive and will lead to the operational life of your reel becoming much shorter.

It will also allow for your line to be rinsed free of salt and if you are using a high end line it really is best to keep it as clean as possible.

What Size Reel for Inshore Fishing ?

A good choice of size reel for inshore fishing will be something in the range of a 3000 to a 4000.

If you are casting all day for speckled trout or redfish then chances are that a size 5000 spinning reel would be a little too heavy.

A heavy reel paired with a light weight rod setup would result in the rod becoming unbalanced and your casting performance would start to suffer.

Generally speaking inshore spinning rods will have a medium or medium/heavy power rating and pair well with a size 3000 or 4000 reel.

For most anglers the difference between a 3000 or 4000 spinning reel will barley be noticeable unless.

The easiest way to decide is on what size reel matches you line. Always check the line capacities for the braking strain and type of line that you intend to use.

Braid is roughly half the diameter of the equivalent monofilament so make sure to double check.

How Much Drag do you Need for Inshore Fishing ?

As a general rule the drag should be set to roughly 20% to 30% of the line that you are using. So if you are using 10 lbs mono for light inshore spinning then a drag setting of roughly 3 lbs would apply.

If doing some heavier inshore spinning then you may go up as high as 20 lbs at a maximum and this would need roughly 6 lbs of drag.

Most angers are surprised by how little the drag setting should be. When using light line in the 10 to 15 lb range you don’t need that much.