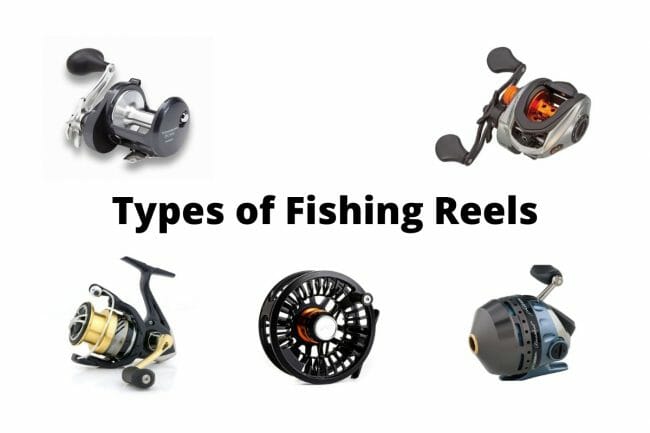 If you are new to fishing then all of the different types of fishing reels that are available may well be confusing.

Making the right choice as to what kind of reel to buy will come down to what you will be fishing for and most importantly how you will e fishing for them.

With lots of reel options available it can be easy to mismatch your rod and reel.

The following is an overview of the most common types of reels that are used in both salt and freshwater fishing.

Spinning reel are the most popular kind of fishing reel in use today. They are suitable for both beginners and experts and can be used for a variety of different types of species and techniques.

A spinning reel is more traditionally called an open face reel but that term has faded over the past few decades.

A spinning reel has an fixed open spool design and uses a bail arm that spins around the spool to lay the line down onto it as you turn the handle.

Spinning reels are designed to sit on the underside of a rod and are cast by opening up the bail and releasing the line as you cast the lure forward.

The line will then fall off of the spool with little or no control.

The drag setting on a spinning reel is normally located on the top of the spool and is adjusted by turning the knob to either tighten the drag or loosen it.

All rods come with a line or lure rating that is usually printed just above the handle.

Once you know what weight or lure or sinker you will be using you can then choice an appropriate rod, line and then finally what kind of reel to match.

Baitcaster reels are designed for all day casting but they do have a somewhat steeper learning curve when it comes to the casting technique that is required to use them.

They are used extensively in the bass fishing world particularly by tournament anglers.

Unlike a spinning reel a baitcaster sits on the top of the rod and has a spool that is free to spin during casting.

As you cast the thumb is used to apply light pressure to the spool which allows you to control the speed of the spool.

This can give you much better accuracy when casting but it does take a bit more skill to master.

You can adjust the speed of the spool via the braking system or the spool tensioner.

Some reels come with a magnetic breaking system the slows the line down at a faster rate towards the end of your cat which reduces the risk of a faster turning spool than the line speed.

If the spool spins faster than the speed that the line is moving at you can get what is called a birds nest, which is were the fast spinning spools grips onto the slack in the line and starts to spool it backwards on top of the line that is already on the spool resulting in a big messy knot, commonly referred to as a “birds nest”.

Conventional reel look like larger bulkier baitcasting reels and they are built for strength and power, with the ability to fight large fish.

They can be used to cast but their casting ability is not as good as a baitcaster reel.

Conventional reels will normally have much lower gearing on them so that you have more torque when you turn the handle.

This gives you the ability to haul much larger fish up from the deep than with other kinds of fishing reels.

Some will also what is called a two speed reel, one speed that is lower for fighting big fish and then at the flick of a switch a much higher speed that allows you to take in line much quicker depending on your needs.

There are two different types drags used on conventional reels:

Star drag are best used for casting, particularly surf casting as the spool will generally run a lot freer when casting.

Spincast are more traditionally called closed face reels and the are generally quite cheap to buy.

Of all the fishing reel types spincast reels are by far the most simple to operate.

You will most commonly see a spincast reel being used by a child and they often come in a low cost rod and reel combo that is aimed at youngsters.

They have a fully enclosed nose cone on the top of the reel with a small opening for the line to run out through.

Spincast reels have a smaller trigger button on them that when pressed releases the line.

This makes it very easy for a child to learn how to cast and will let them concentrate on the fishing rather than the casting.

They are meant to be used when targeting smaller panfish and will normally come pre-spooled with light monofilament line of them so they are not really used to target larger species of fish.

Fly reels are unlike any types of reels in that they are usually only used with a fly rod and are mostly used as a way to store the line not to fight the fish or to cast with.

Fly casting used a special type of thick line that is fed through the rod eyes as you swing the rod back and forth.

Line is stripped from the reel as it is needed by your free hand.

Although some anglers do use the reel to fight some fish particularly larger fish. However true purists of fly fishing will fight the fish by hand and not on the reel.

They are designed to be very light weight as fly fishing setups need to be a light as possible.

You will often see fly fishing reels that have the spool machined so that material is removed from it in order to make it lighter.